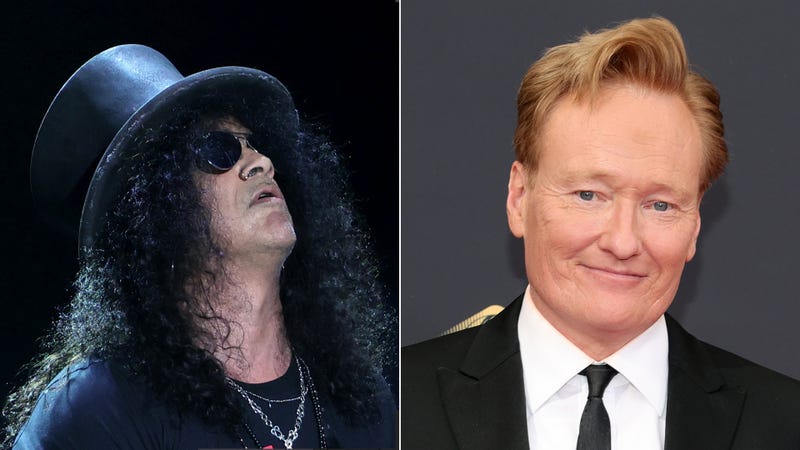 Former late-night host Conan O'Brien has been keeping himself and his beloved cast of characters busy since the end of his long-running talk show in the summer of 2021.

On his latest episode of the Conan O'Brien Needs A Friend podcast, legendary Guns N' Roses guitarist Slash joined him to discuss bikes and guitars, the iconic top hat that has made him (Slash, not Conan) a familiar face in homes worldwide, and of course, working with Myles Kennedy and The Conspirators on their new album, 4.

Quite familiar with the term "happy accident," Slash explained that his famous top hat, which arrived on the rock scene at the very same time Slash threw open the doors with GN'R, was actually an item stolen on a whim from a store in Los Angeles.

Slash's friend, lead singer Taime Downe of the well-known, L.A. rock outfit Faster Pussycat, had worked at a place called Retail Slut on Melrose Place, and Slash, already a hat aficionado, saw the item when he visited the shop one day. "It just spoke to me I guess," Slash tells Conan. "I figured 'what the f***?' I'd just walk out with it. So I did and went next door to 'Leathers & Treasures' and I stole a concho belt."

Slash then described the process of cutting up the belt and creating the iconic look back at the apartment he shared at the time with singer Axl Rose. After wearing his stolen accessory on stage at the Whiskey that night, he says, "it just became a thing where I really identified with it. Like, I wore it all the time. It was the way you could pull it over your eyes, you could hide behind it if you're really high; it was great for bad hair days. I had no intention of it being this long-term thing." Listen to the full podcast above. Slash recently released his new record with Myles Kennedy & The Conspirators featuring the single “The River Is Rising” among nine other tracks, the collaborative group's first new music since 2018. Watch now as Slash discusses the differences in writing music for The Conspirators compared to GN'R, plus get a little tease on when fans can expect more music from Axl & Co right HERE.

Check out some of Audacy's all-new exclusive Rock stations like 80s Guitar, Rock N’ Road, Freedom Rock, The Canyon, Arena Rock, Wake Up and Rock, and The Roots of Rock for those who crave the early days.