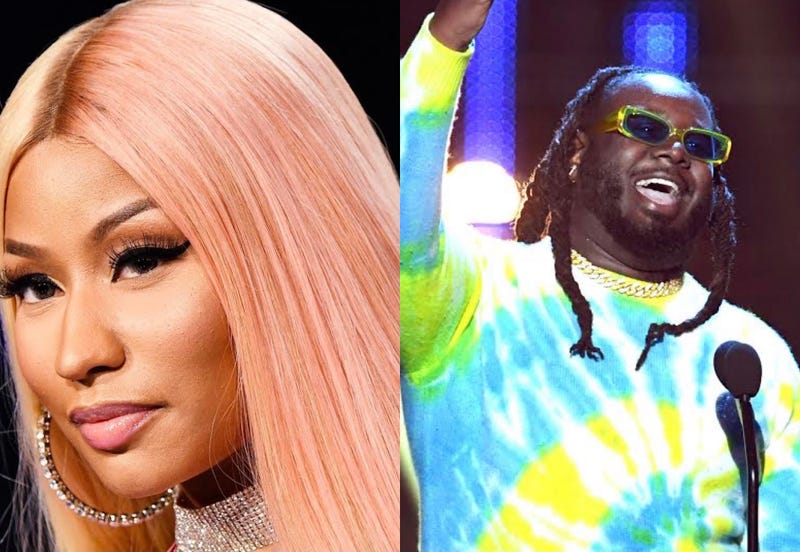 During an interview with The 85 South Show, T-Pain opened up about collaboration he was supposed to do with Nicki Minaj in 2007, however, the up-and-coming rapper at the time, left him hanging.

T-Pain said he was heartbroken when his plans to work with Barbie fell apart. “She was like, ‘Hey, I’m an artist too and I'm working on my s***, so ya know, baby chill,” T-Pain recalled. The reason Nicki turned him down was that she was trying to launch her own career at the time.

The rapper said he had asked her for a “quick little verse,” but the “Seeing Green” artist again said, “I’m working on my s*** too!”

The “Buy U a Drank” rapper said he didn’t feel her response was maliciously intended but admits he felt let down. He added, “Maybe I was in love with Nicki Minaj.”

Barbz found about the interview and responded on Twitter, writing, “I don’t remember this AT ALL but it DEF sound like smthn I would say.
Omg what was I thinking? He was already a really big artist. I was still underground. Chileeeeee I used to b buggin yo. I was under so much pressure to deliver.”

The Pink Friday artist said it was her fault for ghosting him and added that it was all love all around.

“I have nthn but love and respect for your talent,” adding a big thank you to T-Pain for clearing the vocals for the “Go Hard" sample off of her recently re-released mixtape, Beam Me Up Scotty.