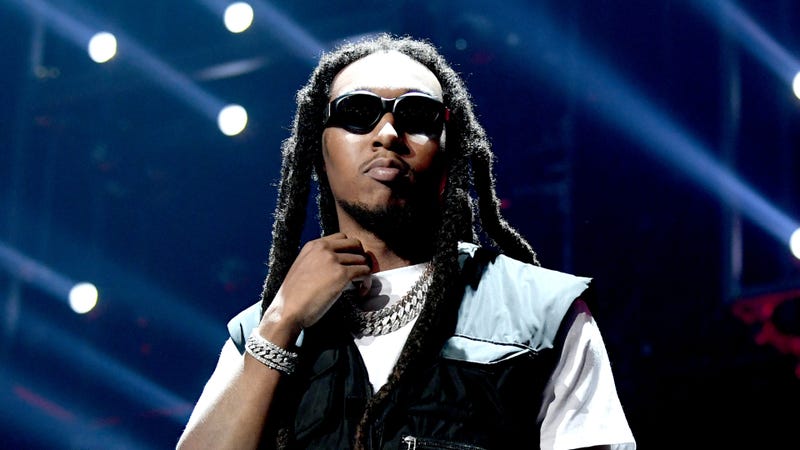 On Friday November 11 at State Farm Arena in his home city of Atlanta, Georgia, Takeoff’s fans, famous friends, and family gathered to say their goodbyes to the late rapper.

Listen to Migos Radio and more on the free Audacy app

During the funeral and memorial service, at which Yolanda Adams, Byron Cage, Chlöe Bailey, and Justin Bieber performed, the capacity crowd of 21,000 people were greeted by a large sign outside the arena that read "Celebrating the life of Takeoff.”

The late rapper’s family members, including his mother, brother and sister, as well as Offset and Quavo, addressed the crowd during the emotional event. The latter of which also took to social media to share his words for the heartbreaking loss with the world.

In his eulogy, Quavo expressed how the terms “uncle” and “nephew” never quite captured the bond he and Takeoff had. “I knew you weren’t my brother cuz you are my sister’s son, so I couldn’t say brother,” he wrote. “Now I finally get it… you are OUR angel watching me and watching us this whole time in living form making sure EVERYONE FELT UR LOVE AND HUGS while u here and u made our dreams come true.”

Cardi B, who as wife of Offset, has a special bond with Migos, took to Instagram after the ceremony to pay tribute. Starting off her message to Takeoff by writing, “…your untimely passing has brought a great deal of pain and sorrow to so many lives. The impact you had in this world was so considerable and we have struggled to grasp this tragedy. I am heartbroken but I am grateful for all the precious memories we got to share while you were here with us. This has truly been a nightmare and the pain is incomparable.”

Drake, who spoke at the ceremony, sharing about the great times he and Migos all shared while touring together in 2018, comparing their brotherhood to that of the Rat Pack, paid tribute to his friend on Instagram as well.