To celebrate, singers Natalie Maines, Emily Strayer, and Martie Maguire joined the TODAY Show this morning, chatting with Carson Daly about dropping the "Dixie" from their name in the wake of social justice movements following the death of George Floyd, new music, and much more.

Their previous triumphant return, following anti-war comments the group made nearly 20 years ago was also a topic of discussion, as the group is well aware how “cancel culture” can have its effect.

Back in 2003 at a London concert, Natalie made a statement criticizing President George W. Bush and the invasion of Iraq, saying the band did not support the war and were “ashamed” that Bush was from Texas. What followed was being blacklisted from Country radio and the members receiving death threats.

“You guys came back a few years later, had that sweeping GRAMMYs and it was just, like, you were on top of the world, despite all of those things,” Daly posited, leading to the next logical question, “Why go on a ten-year break?”

“We were tired. We had nine kids,” says Natalie, with Emily chiming in, “being canceled is exhausting.”

Natalie admits being "canceled" at the time didn't feel as stifling because the band could always lean on their fans, while Emily admits playing music is "something you can do no matter what. We may have lost a certain contingency of the crowd, but our fans were still there for us. I wouldn't say it was easy, but I don't regret any of it to be honest."

The release of Gaslighter marks the trio’s official return, albeit under a different moniker, which Emily says they were kicking around for some time, but in the light of the current Black Lives Matter movement the band knew it was time to meet the moment. "We felt, how could we not?"

One of the new singles, "March March," and the socially conscious music video that goes along with the track came up in conversation as well, which lead Daly to ask The Chicks what role they feel music plays in society at this moment. 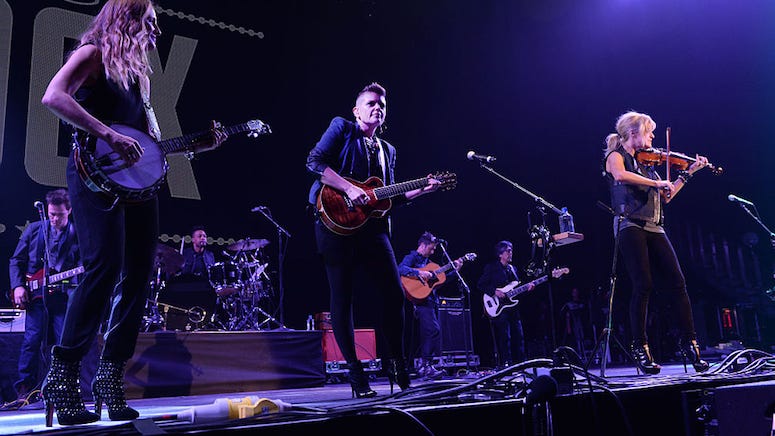 The Chicks Detail Name Change and Reactions They Received After Announcement

"I think it's huge," say Natalie. "I think people are speaking out more and people who used to sort of do the 'I'm just happy to be here, it's not my job to comment, I'm just here to entertain' (thing) -- I see some of those people starting to speak out now as well and I think that's what music is for."

Check out The Chicks' performance of their brand new single "Sleep At Night" on the TODAY Show below, and watch the full interview with Carson Daly right here.

.@thechicks are starting our Friday off right with a performance of their new song, “Sleep at Night” 🎻🪕 #TheChicksTODAY @Citibank pic.twitter.com/5fDngemEXV

The Chicks were also guests on the Late Show with Stephen Colbert last night, discussing similar topics, and offering up another live song from the new album. Watch their live-at-home version of “March March” below.

Gaslighter is out now.