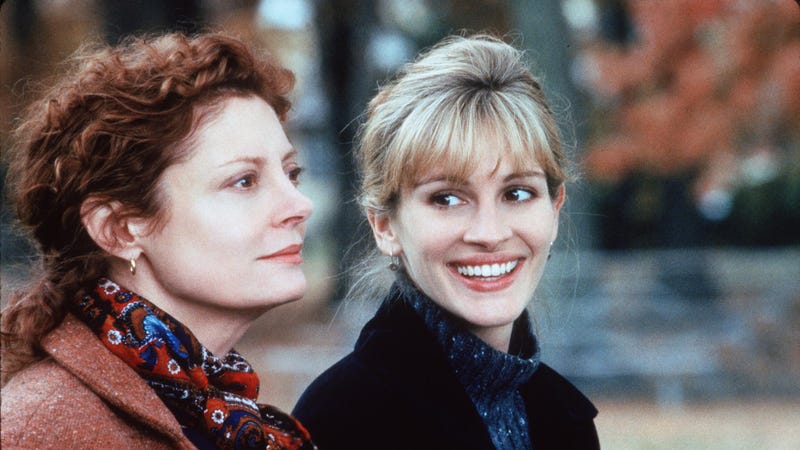 Mother's Day, first observed in 1908 and founded by Anna Jarvis, was conceived as a day to honor motherhood and family life "at a time of rising feminist activism," according to the blue Pennsylvania Historical and Museum Commission.

Today, it's a day to take Mom out to brunch, or buy her some flowers or a special treat, or help her with some yard work — because moms deserve some payback, right? Because moms are not, despite what we may think, superhuman. They are ordinary and extraordinary women — as capable of great feats as they are susceptible to great failure — as this list of movies, perfectly fitting for a Mother's Day movie night, makes clear.

Hey, if motherhood were easy, everyone would do it.

What do you get when you pair Saoirse Ronan’s A+ acting skills with Greta Gerwig’s subdued directing? You get “Lady Bird.”

Based loosely on Gerwig’s own upbringing in Sacramento, “Lady Bird” is a coming-of-age story about Christine “Lady Bird” McPhearson (played by Ronan) a Catholic-school senior itching to break free of her humdrum life in Northern California and start her adult years in New York City.

The high schooler tussles with her mother, Marion (Laurie Metcalf). For any young woman who felt out of place growing up in a small town, “Lady Bird” often feels like a mirror more than a movie — the friendships, heartbreak and contentious familial relationships Lady Bird deals with are seemingly universal.

“Lady Bird” is available to stream on Netflix.

“Steel Magnolias” is a story about the resilience of motherhood. Spoilers ahead if you haven’t seen this 1989 flick: Shelby (Julia Roberts), who is diabetic, has a baby against the wishes of her doctor and mother, M’Lynn (Sally Field), at great risk to her personal health. The deterioration of her health drives the story forward, up to her hospitalization, death and funeral — at which Field delivers a master class in overacting.

The rest of the cast is just as legendary: Dolly Parton as Truvy, the superficial hairdresser with hidden depth; Daryl Hannah as Annelle, Truvy’s shy assistant with a past; Shirley MacLaine as Ouiser, the cantankerous misanthrope who cares about people much more than she lets on; and Olympia Dukakis as Clairee, the wealthy and witty widow of the former mayor. In 1989, had anyone seen another movie with six leading women and no leading men?

“Steel Magnolias” (1989) is available to stream on Hulu and Starz.

Could this mother-daughter pair be any more different? Disney’s “Freaky Friday” remake took that idea as literally as possible and ran with it. Jamie Lee Curtis plays mom Tess to Lindsay Lohan’s teenage Anna. Anna is the epitome of early 2000s Avril Lavigne-era teen angst, while her mother is juxtaposed as an uptight “turn down that rock ‘n’ roll music” know-it-all parent. This version is, of course, cheesy, but it does actually has some fun one-liners and oh-so-2003 music breaks of Lohan attempting to strum a guitar. It takes switching bodies and experiencing life lessons in someone else’s shoes for them to come to appreciate each other for who they really are. All together now: awwww.

“Freaky Friday” (2003) is available to stream on Disney Plus.

Nothing would make your mother happier than for you to get married — and invite three of her exes to your wedding. The 2008 movie version of “Mamma Mia!” may not be beloved by Rotten Tomatoes’ standards, but any fan of the musical loves what this film has to offer. After all, it’s a star-studded, superbly talented cast: Meryl Streep, Amanda Seyfried, Pierce Brosnan, Colin Firth and Stellan Skarsgård, for starters. With the music of ABBA and a beachy Greek isle setting, “Mamma Mia!” just exudes pure happiness. Except, of course, when Streep sing-cries “The Winner Takes It All” up a windy mountainside. Full-blown tears.

Not all mother-child relationships are sunshine and roses. “Stepmom” navigates the complex emotions that come from a blended family. Susan Sarandon and Ed Harris play Jackie and Luke, a divorced couple with two children (played by Jena Malone and Liam Aiken), who really struggle with their dad’s live-in girlfriend, Isabel (Julia Roberts) who is much, much younger than him.

Jackie doesn’t help much, seemingly sabotaging Isabel at every turn, further fraying the relationship she’s trying to build between her future stepchildren. Her behavior begins to make sense when she lets the family know she has terminal cancer, and they all have to learn to navigate that reality together.

Anyone who has come from a blended family, whether as mom, stepmom or kid, can relate to this feel-good dramedy. Plus, it delivered the great song, “Ain’t No Mountain High Enough,” to a new generation.

“Stepmom” is available to rent on Amazon Prime

And now for something a little more sinister. Ari Aster’s gruesome horror film about generations of women not understanding each other, even in death, is not for the faint of heart.

Toni Collette stars as Annie, a mother and wife trying to keep it together after the death of her own mom, with whom she had a seemingly nonexistent relationship. After Annie’s mother dies, the family experiences another horrible tragedy, which fractures them even further – leading to a slew of alarming discoveries, experiences that we can’t talk about without spoiling the hell out of the movie.

Suffice it to say, “Hereditary” is a must-watch for any serious horror fan, though we’d be surprised if you were one and hadn’t seen it already.

Hereditary is available to stream on Showtime, or rent on Amazon Prime

This 1981 biographical look at Joan Crawford’s relationship with her adopted daughter, Christina Crawford, is based directly off of Christina’s eye-opening memoir about her famous and by her account, abusive mother.

Faye Dunaway stars as Joan in one of her most iconic roles (“NO MORE WIRE HANGERS!” anyone?), but the film takes on a campy bend that has gotten it panned, critically. The extended family of Christina and Joan are also split on the veracity of Christina’s take on her mother, with some corroborating the story and others denouncing it.

The controversy surrounding the film makes it all the more enticing, even if Roger Ebert did say in a review it left him “feeling creepy.” Either way, Dunaway’s performance should be reason enough alone to give this one a shot.

Bring out the tissue box for this one. Based on a true story, Saroo Brierley (Dev Patel) is separated from his family in India when he was just 5 years old. He falls asleep on a stopped train but wakes up to it moving fast — and all alone. He arrives in Calcutta, where he does not understand the Bengali language. He ends up homeless and then in an orphanage, but he is eventually adopted by Australian parents (David Wenham and Nicole Kidman). Twenty years later and now living in Melbourne, Saroo sets out on a mission to find his Indian family. “Lion” shows the power of family goes beyond DNA — and Google Earth searches, apparently, which Saroo uses to help him in his journey back home to his mother. “Lion” received six Oscar nominations, including best picture.

“Lion” (2016) is available to stream on Amazon Prime and Roku Channel.

Long before she was saving the universe with the Avengers as Captain Marvel, Brie Larson was sitting on cakes for money (The United States of Tara). She demonstrated heroism then, not by obliterating the enemy, but rather by simply surviving.

In "Room" (2015), Brie plays a mother dedicated to all of the typical touchstones of childhood for her 5-year-old boy. She wants Jack to be safe and happy and occupied with playtime and learning. She wants a comfortable and unremarkable, yet fulfilling, life for him.

But their situation is anything but unremarkable. And safety and fulfillment are illusions that Jack's mom has spun out of thin air inside the 10-foot by 10-foot space they have been trapped in for years and years. That's what a mom does: If she can't guarantee the best life for her child, she will make the most of what they do have.

But Jack has questions that drive his mother to plot an escape — an escape far less challenging, it turns out, than the so-called real world Jack may be unprepared to know, and she may be unable to return to.

“Room” is available to stream on Hulu.

"The Lost Daughter" examines what happens when a woman's need to live on her own terms butts up against the requirement to live for someone else, with calamitous and heart-wrenching consequences.

In Maggie Gyllenhaal's directorial debut, Olivia Coleman plays Leda Caruso, a mid-career college literature professor devoted to her work. She has two daughters but, by her own admission, she is "an unnatural mother." We see this play out in flashbacks to a younger Leda who cannot connect with her children. While on a solo beach holiday in Greece, she finds perhaps a spark of kinship in a young American woman, vacationing with her brash family, whose distance from and resentment of her daughter reminds Leda of her own experience with the "crushing responsibility" of children.

Leda, wholly unlikeable yet undeniably relatable, manages to keep the audience on her side, if reluctantly. She is not awkward or impulsive, she is simply honest. But where other women may remember their past, Leda looking back is in a constant argument with her younger self, haunted by her choices, and desperately unhappy with their outcome. Soon she is overwhelmed — by memories of her motherly missteps, by the strange family she can't seem to escape, by an obsessive yet unpremeditated theft from a little girl — which ultimately nearly leads to her untimely demise.

“The Lost Daughter” is available to stream on Netflix.