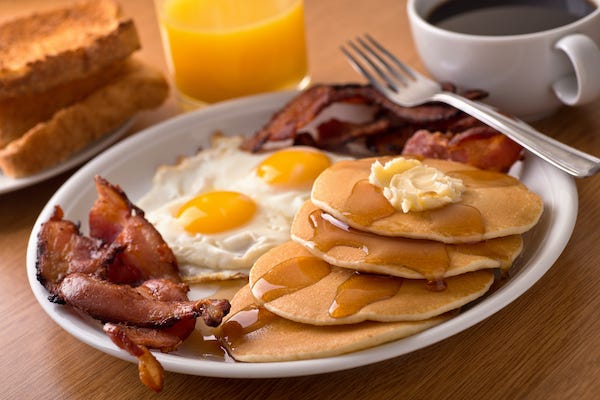 It's often been said that breakfast is the most important meal of the day, and some people wish they could have it for every meal.

A new survey conducted by One Poll found that 31% of people wish they could ditch a traditional dinner and have a second breakfast instead!

The survey also found that 65% of people believe that breakfast foods taste better for dinner, while another 65% also admitted to turning their dinner leftovers into breakfast the next day.

With the battle between sweet and savory, the former wins by a mere !5, with the savory following closely behind with 23%. The other half of people -- 48% to be exact -- enjoy a mix of both sweet and savory options.

Per the survey, the best breakfast dishes include eggs, omelets, and pancakes. And don't forget the sides, as the top favorited ones are coffee, sausage, bacon, milk, orange juice, fruit, and toast!

Despite the love for breakfast, almost one-third of Americans opted for quick and efficient dishes.

And while breakfast and brunch are synonymous with the weekend, the most surprising part is that Monday was voted as the biggest day for breakfast-eating (39%) with Sunday as the least likely.