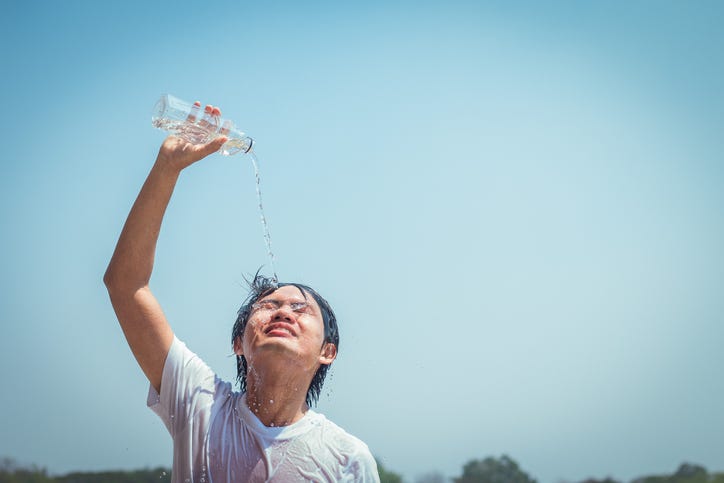 Much of the country is continuing to sizzle in extreme heat.

More than 50 million people are under a heat advisory as sweltering temperatures and high humidity hit a large part of the United States -- affecting about 70% of Americans, NPR reported.

Heat advisories have been issued from central Texas to the western Florida Peninsula as heat indices potentially approach 115 degrees on Friday. Excessive heat warnings are posted for southern Mississippi and parts of Louisiana as well, including New Orleans.

According to the National Weather Service, the dangerous heat will remain a concern through this weekend as high temperatures soar into the upper-90s and low 100s from the southern Plains to the eastern Gulf Coast -- potentially breaking a few daily high temperature records.

The heat is also stretching up the Pacific Northwest, where temperatures are forecast to climb each day through Sunday and reach into the 90s across much of the region, with 100s farther south into the central valley region of California. Heat advisories have been issued along eastern portions of Washington and Oregon for Saturday and Sunday.

Dangerous heat is forecast for the Gulf Coast States through the end of the week with multiple Excessive Heat Warnings and Heat Advisories in place. Check out https://t.co/BznEUWHyb7 for more information and heat safety tips. pic.twitter.com/KPofQc0yZK

Abnormally hot temperatures are also on the docket in the North-Central U.S., with highs in the low-mid 90s across the Dakotas and Upper Mississippi Valley.

The sweltering temperatures are the result of a "heat dome" that settled over much of the country earlier this week.

On Thursday, at least 15 states hit 100 degrees and at least 21 high temperature marks were set or broken, according to the National Weather Service. Twelve states also broke the 100-degree mark on Wednesday with 21 records tied or broken, the Associated Press reported.

"It's easy to look at these figures and forget the immense misery they represent. People who can't afford air conditioning and people who work outdoors have only one option, to suffer," Texas A&M climate scientist Andrew Dessler told the AP. "Those of us with air conditioning may not physically suffer, but we are prisoners of the indoors."