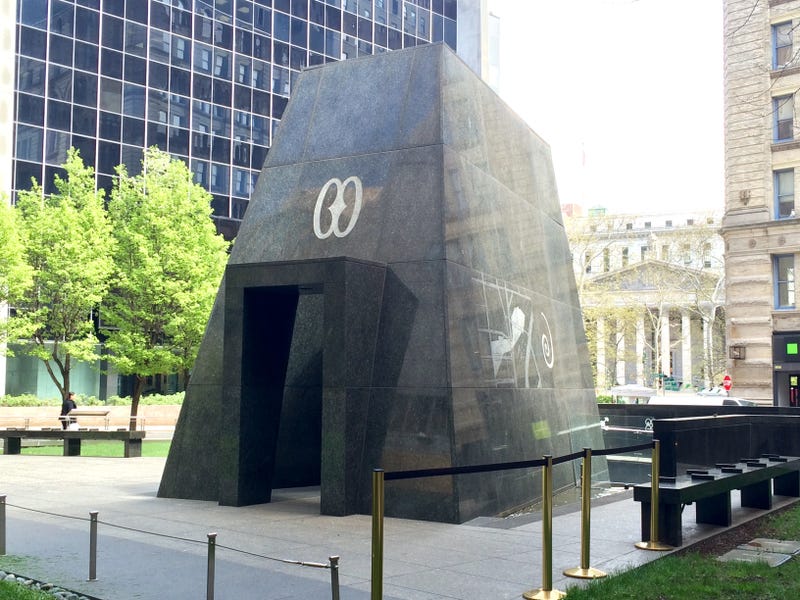 The Outdoor Memorial of the African Burial Ground National Monument in lower Manhattan, NYC, is an important archaeological find of the 20th century & is the only U.S. national monument that memorializes the struggle of Africans and African descendants. Photo credit Getty Images
By Emily Nadal, WINS

NEW YORK (1010 WINS) — New York City is not often associated with slavery, despite the area having the second-highest number of enslaved people during the colonial period.

Much of what visitors and residents alike know and love about the city can be traced back to the labor of freed and enslaved Africans. Though New York outlawed slavery before the Civil War, in 1827, the practice had already been in place for more than two centuries in the area–laying the foundation for the city to become one of the most prosperous in the world.

This year, Juneteenth will be recognized as a federal and city holiday for the first time since the initial celebration in 1865, just after the Civil War. The day commemorates the emancipation of African Americans, and though slavery was no longer legally practiced in New York at the time of the first Juneteenth celebration, remnants of its impact were still very much prevalent – both then and even now.

Below, a starting point for learning more about slavery and the Black experience in New York City. 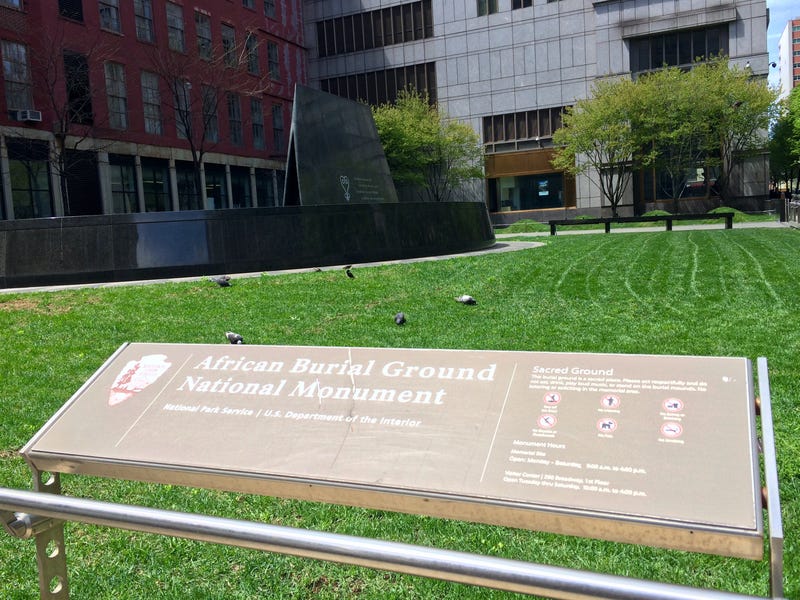 The Outdoor Memorial of the African Burial Ground National Monument in lower Manhattan, NYC, is an important archaeological find of the 20th century & is the only U.S. national monument that memorializes the struggle of Africans and African descendants. Photo credit Getty Images

There are a few places in New York City to go if you want to learn about slavery in the city, but there is only site solely dedicated to the topic–and it almost didn’t exist! Back in 1991, a new federal building was set to be built in Lower Manhattan in the vicinity of a known burial ground enslaved Africans used to bury loved ones. But by that time, centuries after the burial ground was in use and after much development, many thought there’d be nothing left.

Upon digging deep into the earth as part of the building’s construction, mostly intact remains of hundreds of Africans were uncovered, 419 in total. After information about the remains was broadcasted to the media, a fight ensued to preserve the remains and the site which took years on the part of dedicated volunteers. Though the federal building was still built, about an acre of land was set aside for an outdoor memorial and the reinterment area for the remains which, today is open to the public and is now managed by the National Park Service. An indoor visitor center featuring a short video and interactive exhibit space is just around the corner on the first floor of the federal building.

Each year, the site commemorates Juneteenth with celebrations and learning opportunities. This year, the event will take place on June 18 and is free and open to the public. 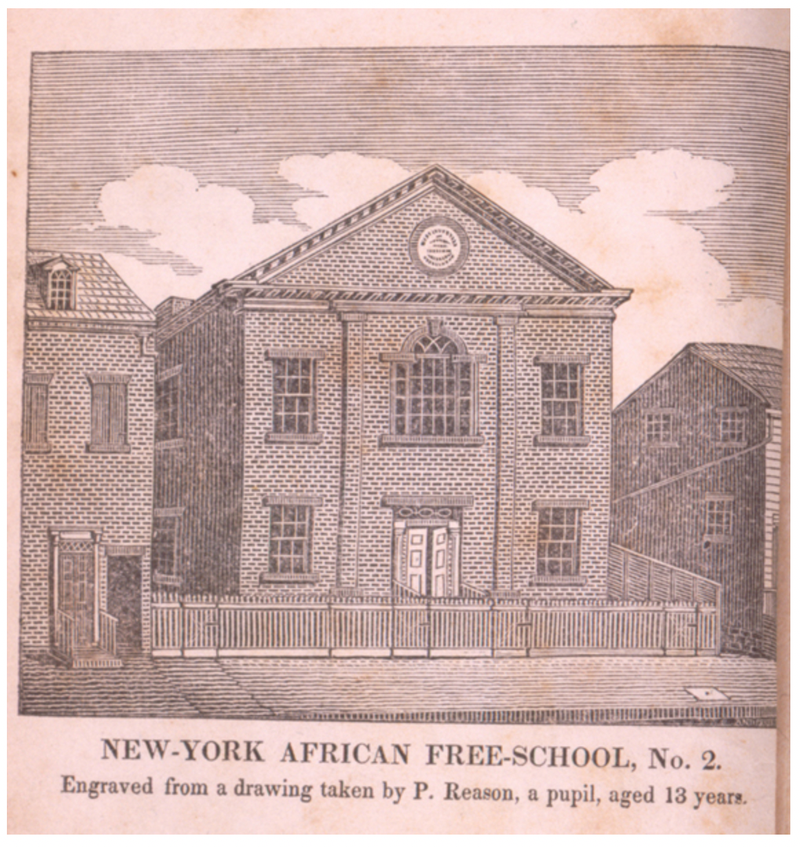 First established in 1787 when slavery was still legal in New York, the African Free School began with a single-room school house with about 40 students, mostly children of enslaved people. The mission of the school, which was the product of the New York Manumission Society, was to empower young Black people and prepare and educate them for something other than slavery. The goal of the school was bold for its time but was successful nonetheless, growing from one single schoolhouse with dozens of kids to seven locations with hundreds of enrollees, eventually merging into the city’s public school system. No museums dedicated to the African Free School exist, however, you can pass by some of the schoolhouse locations in Lower Manhattan. 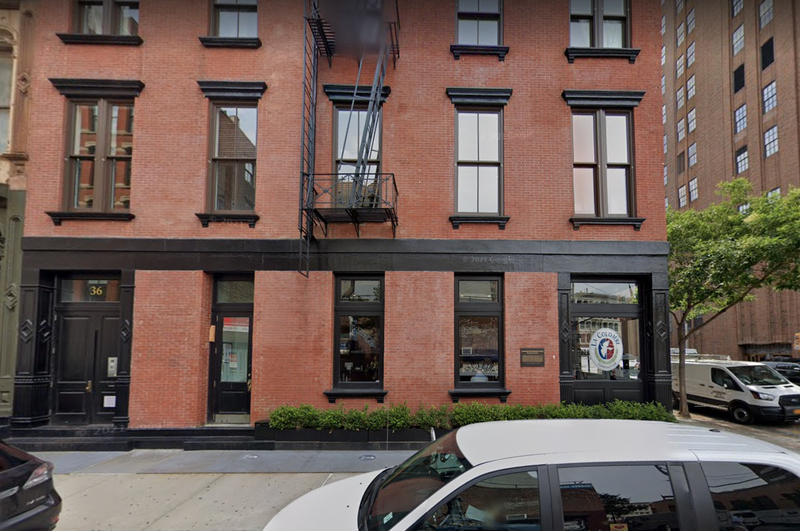 A staunch abolitionist, David Ruggles was born in Norwich, Connecticut in 1810 and made his way to New York City when he was a young man as a mariner. Ruggles became involved in the growing anti-slavery movement in New York during the 1830s and used his grocery store on Cordlandt Street as a library and reading room for African Americans who were denied access to the city’s public libraries. There, as the first Black-owned bookstore, Ruggles sold anti-slavery publications but had to relocate after the site was destroyed by a mob.

At his new location on Lispenard Street, Ruggles wrote several articles and pamphlets for Northeast newspapers. His home also served as a boarding house on the Underground Railroad, aiding in freeing hundreds of enslaved people, including Frederick Douglas. No exhibits dedicated to David Ruggles are at the site, however, you can pass by to view the location. 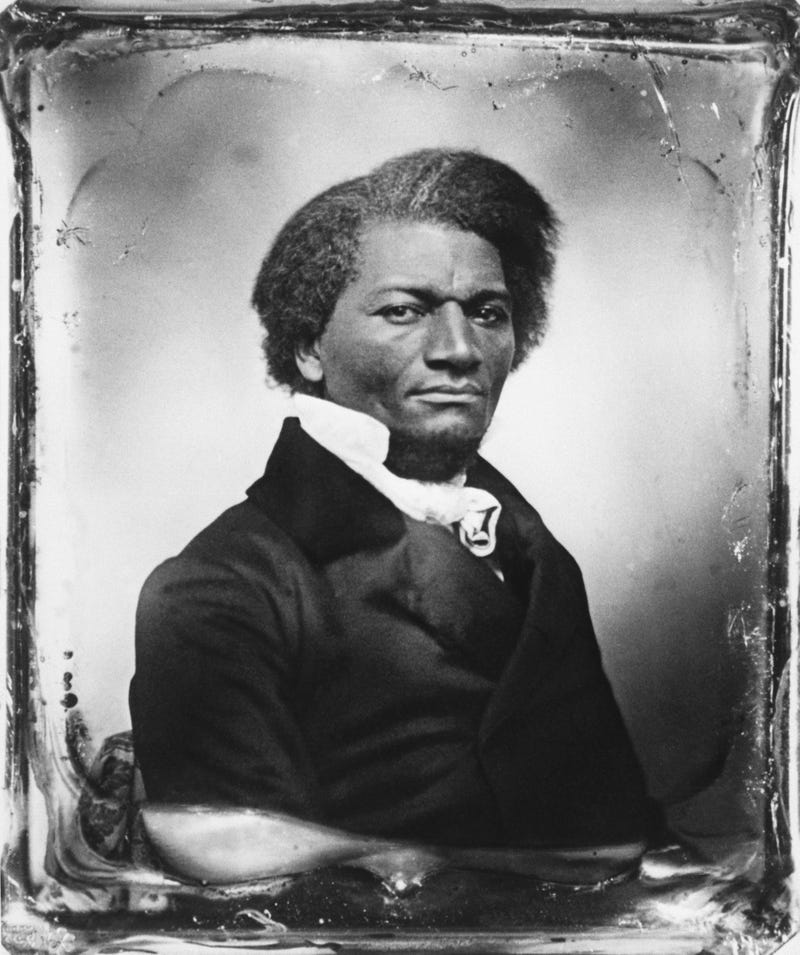 Born into slavery, American writer and abolitionist Frederick Douglass (1817-1895) bought his freedom with income earned from lecturing abroad after the publication of his autobiography, Narrative of the Life of Frederick Douglass, circa 1855. Photo credit Getty Images

En route from enslavement in Maryland to freedom in New York, Frederick Douglass stepped off of Hudson River ferry at the Chambers Street Dock in 1838 after pretending to be a free sailor. Douglass stayed his first night in New York City sleeping in a barrel and weary of trusting anyone, fearful of slave hunters. The next day, Doulgass spoke to a Black sailor who assisted him. He eventually found David Ruggles’ boarding house and only stayed in New York for two weeks before Massachusetts.

The area where Douglass spent his time in New York has been renamed Frederick Douglass Landing to “recall the enslaved fleeing the South on the Underground Railroad.” 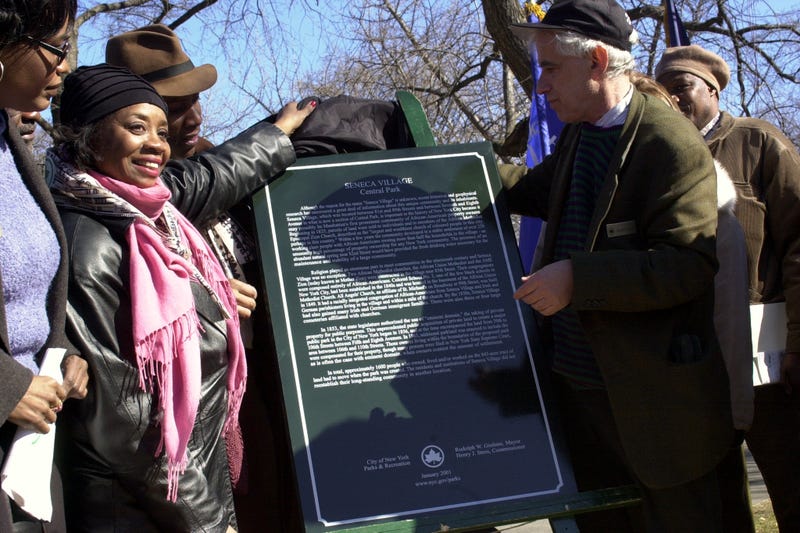 As part of the celebration of Black History Month, a historical sign is unveiled commemorating Seneca Village, probably Manhattan's first prominent community of African-American property owners. The village was located between 81st and 89th Sts. and between Seventh and Eighth Aves., in what is now a section of Central Park. Circa 2000. Photo credit Susan Watts/NY Daily News Archive via Getty Images

Central Park is one of New York City’s most iconic sites. But the creation of the large public space is riddled with a dark past.

The area of West 82nd to West 89th Streets used to be a bustling predominantly Black community,  many of them property owners, from 1825 to 1855. The community offered residents an escape from the crowding of downtown New York City but also the discrimiantion they often faced.

Many of Seneca Village’s residents were affluent families who owned their homes which was not a common occurrence in New York at the time. In 1855, the city decided to build a large public park to offset the unhealthy conditions created by the densely populated urban area and provide recreational use. In total, 775 acres were allocated for the park–from 59th Street to 106th Street spanning 5th Avenue to 8th Avenue.

The land of Seneca Village residents was acquired through eminent domain, which allows the government to take private land for public use if they compensate for it. Roughly 1,600 inhabitants were displaced and it is still unclear where many of them relocated to.

The Central Park Conservancy offers several options for learning more about Seneca Village through a guided tour, an outdoor exhibit and an upcoming Juneteenth celebration. 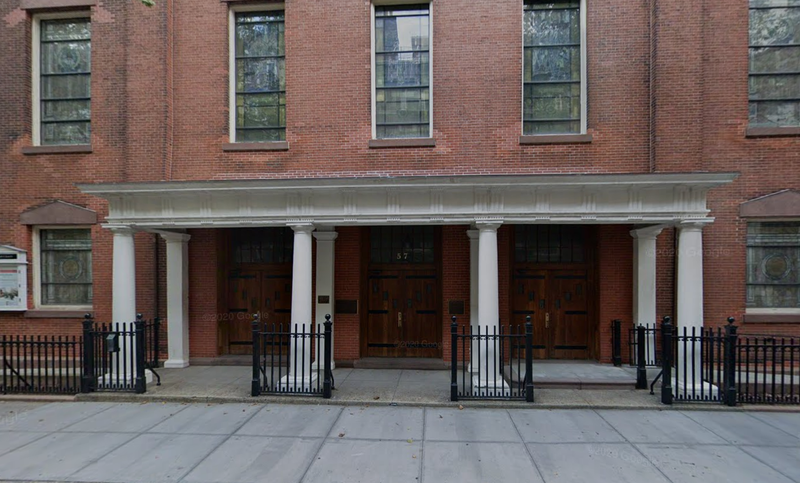 Churches played a significant role on the Underground Railroad, serving as safe gathering spaces for enslaved people along their passage to freedom with many congregants, especially at Plymouth Church, housing escaped enslaved people in their homes. One prominent member of the church, Lewis Tappan, was famous for organizing efforts to release the escaped enslaved
people of the Amistad in 1839. He later helped to fund the church and officially joined in 1856.

Plymouth Church remained active on the Underground Railroad through the end of the Civil War, rising to reportedly become the most famous church in America. 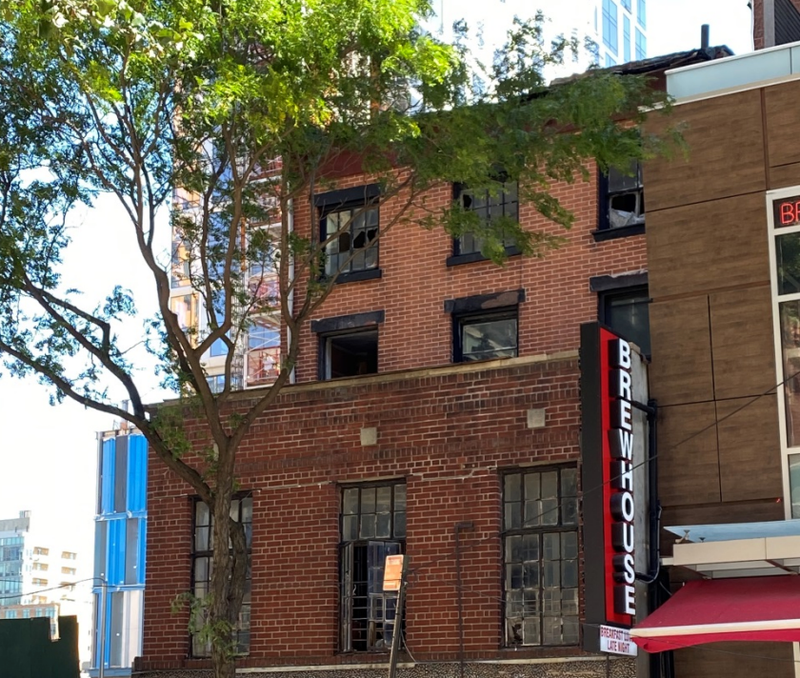 Well known abolitionists Harriet and Thomas Truesdell moved to this Brooklyn home in 1851 after being active in the movement for years. The house was part of a row of others all built in 1848. Some residents believed the homes were connected through an underground tunnel used on the Underground Railroad to transport escaped enslaved people.

Though research could not confirm verbal stories of the home being a stop on the Underground Railroad, the significance of it being the home of the Truesdells for more than a decade granted it landmark status by the city last year.