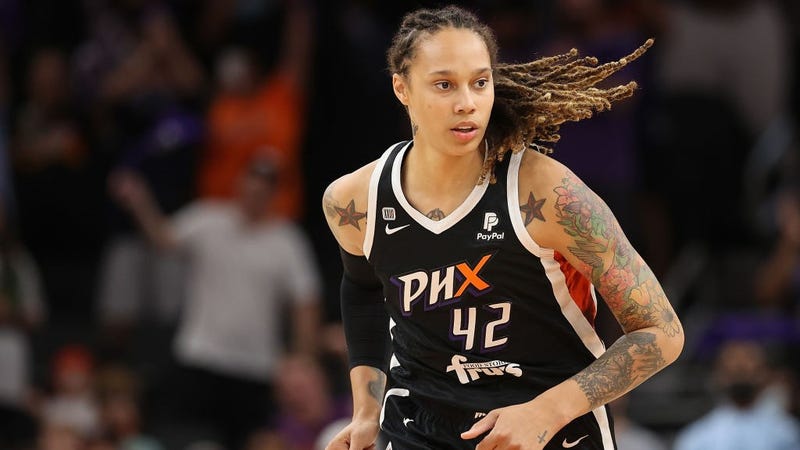 PHOENIX, ARIZONA - OCTOBER 06: Brittney Griner #42 of the Phoenix Mercury during the first half in Game Four of the 2021 WNBA semifinals at Footprint Center on October 06, 2021 in Phoenix, Arizona. Photo credit Christian Petersen/Getty Images
By Colin Martin, Audacy

The Biden administration has offered a deal to Russia for the release of two Americans, WNBA star Brittney Griner and former U.S. Marine Paul Whelan, according to multiple reports.

In the proposal, the United States would trade Viktor Bout, a convicted Russian arms dealer who was sentenced to 25 years in prison in 2011, in exchange for Griner and Whelan, according to CNN.

"We put a substantial proposal on the table weeks ago," Secretary of State Antony Blinken said Wednesday, per CNBC.

"Our government has communicated repeatedly and directly on that proposal and I’ll use the conversation to follow up personally and I hope, move us toward a resolution," Blinken added.

Griner, 31, was arrested on Feb. 17 on charges of possessing cannabis oil when she returned to Russia to play for a Russian Premier League team.

Griner sent a letter to President Joe Biden on July 5 asking for his help to get her home. In the letter, Griner wrote, "I’m terrified I might be here forever." She then plead guilty on July 7 to the drug charges which carry a penalty of 10 years in prison.

Whelan, 52, was arrested in December 2018 and later convicted by a court in Moscow in June 2020 where he was sentenced to 16 years in prison for espionage.

When asked by reporters, Blinken did not share additional details of the proposed offer to Russia.

"When it comes to our efforts to secure the return home of Paul Whelan and Brittney Griner you understand that I can’t and won’t get into any of the details of what we proposed to the Russians over the course of so many weeks," Blinken said.

People briefed on the matter told CNN that the Justice Department initially opposed trading Bout, but have since supported trading Bout for Griner and Whelan with support from President Biden.