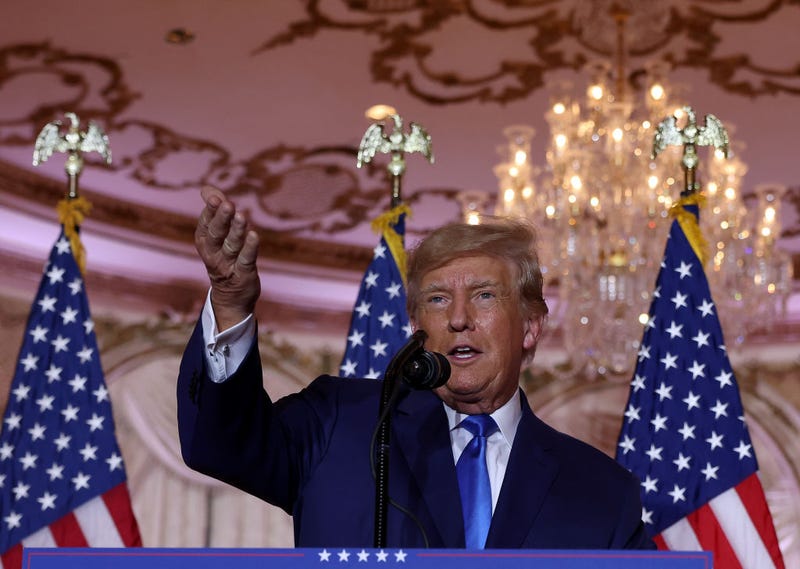 Former President Donald Trump has announced that he will seek the Republican nomination and run for president in 2024, marking his third campaign in as many presidential elections.

The former president made his announcement from his Mar-a-Lago estate a week after the 2022 midterms. It comes after a year of speculation on his future political plans.

During his speech, Trump touched on several topics, including the 2020 COVID-19 pandemic, current inflation rates, the energy industry, the southern border, and more. On all of the issues, Trump boasted that he had successfully taken care of them, only to have them struggle once he left office.

Trump also touched on global affairs, including the current invasion of Ukraine and recent missile tests from North Korea, both of which he said "would have never happened" had he been president.

"The world was at peace, America was prospering, and our country was on track for an amazing future — because I made big promises to the American people and, unlike other Presidents, I kept my promises," Trump said.

Trump, who is still under investigation for his efforts to overturn the 2020 presidential election, has remained one of the top two favorites among republicans to try and retake the White House, the other being Florida Gov. Ron DeSantis.

However, he has lost steam in recent days following the failure of Republicans to gain control of the Senate, with several of Trump’s hand-picked candidates losing their elections.

Despite this, during his speech Trump boasted a victory in the 2022 midterm election, after Republicans won control of the House of Representatives. With uproar from the crowd, Trump continued to say that "Nancy Pelosi has been fired."

Recent polls have also found that Trump is no longer the sweeping favorite to gain the Republican nomination.

A YouGov poll released last Friday found that 42% of Republicans and right-leaning independents prefer to see DeSantis over Trump as the party’s candidate in 2024. Meanwhile, 35% of those surveyed selected Trump, 10% said neither, and 13% said not sure.

Another poll from NBC News released the week before the election found that 62% of GOP voters identified as Republican party supporters rather than as Trump supporters.

One GOP strategist shared with The Hill that Trump shouldn’t have announced his candidacy, saying it “doesn’t help” with the upcoming Georgia runoff for Senate.

“The 2022 midterms are not over and anything that takes away the ability to fundraise, to get the message out there, to keep the media and the journalists focused on this race, is bad for the Republican Party as a whole,” the strategist said.

Former Trump adviser Jason Miller also shared on an appearance on Newsmax that Trump should hold off, saying that “priorities A, B, and C need to be about Herschel right now.”

“This is bigger than anything else in the country. We’ve got to show the focus is on Georgia,” Miller added.

Despite several in the Republican party advising Trump to wait, the former president is blazing forward as he looks to be the Republican nominee for the third presidential election in a row.

While speaking before a crowd in Ohio the night before Election Day, Trump announced that he would have a special announcement to make on Nov. 15. Now it's clear that his announcement is his plans to run in 2024.

No other candidate for either party has officially declared their run for the 2024 election as of yet. Many have said it is one of the earliest announcements for a campaign for the White House ever, coming just a week from the 2022 midterm elections.