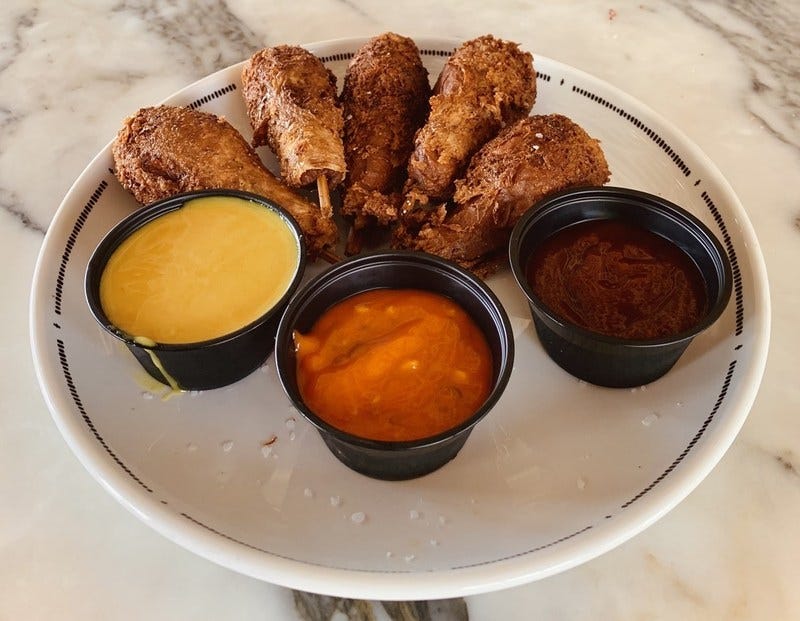 Real or vegan? If you said vegan, you're correct! The fried plate of vegan wings is from Sundial Foods, a company based in Albany, Calif. — and they are 100% vegan skin, meat and bones. Photo credit Sundial Foods via PR Newswire
By Marie Estrada, KNX 1070 Newsradio

The draw of the investment? Chicken wings complete with fully plant-based skin, meat and bones — and it looks delicious.

The Bay Area business touts itself as a company striving to drive "the affordability, sustainability and nutritional value of plant-based meat." And their "chicken" wings seem to offer the full experience.

But how do they get the meat-like texture that they claim to have?

"Sundial's proprietary technology allows for the simulation of a whole cut of meat, with a fibrous meat texture, including muscle, and plant-based skin and bone," the company said in a statement to PR Neswire.

There are only eight ingredients in Sundial's wings — water, chickpeas, gluten, chickpea protein concentrate, soybeans, nutritional yeast, salt and sunflower oil, according to the company's website.

The investment in the plant-based food item that mimics the real thing isn't a first for Nestlé. In October the company launched alternatives to egg and shrimp.

"Garden Gourmet vEGGie" mimics eggs and contains both soy and omega-3 fatty acids to achieve an egg-like item that can be "scrambled like real eggs, used in a frittat and pancakes or even as an ingredient when baking cakes," the company said in a statement.

"Garden Gourmet Vrimp" were announced the same week as a vegan combination of seaweed, peas and konjac root that is a solid source of fiber and offers "authentic texture and flavor of succulent shrimps."