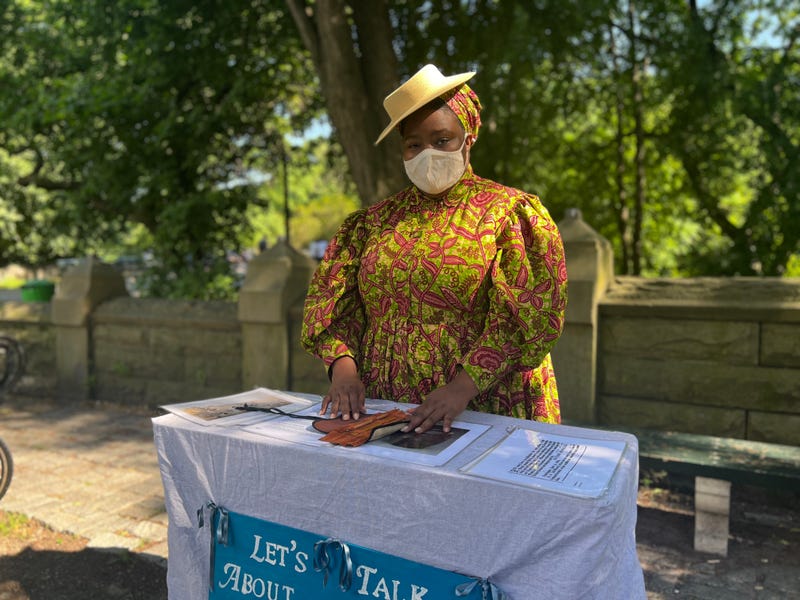 NEW YORK (1010 WINS) — Cheyney McKnight spends most of the year educating the public about different historical topics, especially slavery in America. But on Juneteenth, she’s off the clock.

“Juneteenth was a celebration that black folks used to celebrate their freedom,” McKnight told 1010 WINS. “This was not ‘Black folks educate white people about slavery day.’ This is a ‘we made it day.’ We’re free.”

The 32-year-old Harlem resident has been working as a historical interpreter for nearly a decade now in different capacities–donning period clothing as a living history reenactor or aiding museums and institutions with improving their programming. McKnight’s approach to storytelling is an interactive one, bringing the past to life through the use of costumes and tangibles while inviting dialogue rather than utilizing lectures. 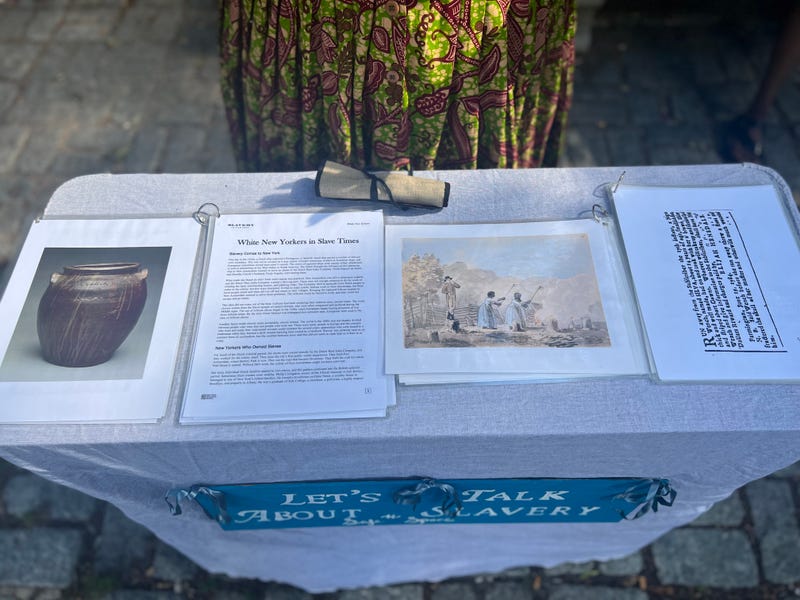 “Sometimes, if people come to a site and see me cooking over fire, they won't think that I'm here to talk deeply about slavery, but I'm just here to reenact cooking a meal for their entertainment,” McKnight said. “And then when they come in and speak with me, I use the craft of interpretation to really build and get at the core of what I am here for, and that's to talk about slavery and race in America.”

Outside of her more formal work, once or twice a month, McKnight sets up a table outside of a heavily-trafficked area in the city, like in front of Central Park, with a sign that reads “Let’s Talk About Slavery” and waits for curious passersby to speak with her.

Dressed in a handmade, bright-colored, patterned dress, McKnight adopts clothing as a tool for passion projects like these. Hailing from a fashion forward family who spent lots of free time watching runway shows, McKnight took an interest in incorporating custom garments into her work for various purposes–sometimes they are historically accurate representations to aid in storytelling, other times she wears the garb for different reasons.

“I really want to, number one, put myself on equal footing with the people who come and speak to me,” McKnight explained. “Sometimes people don't see me, but they see an enslaved person or someone lesser than them–which an enslaved person was not lesser than them, but they see someone lower. And so with this [outfit], it gives you the idea that I'm here representing my ancestors. But don't get it twisted, I am Cheyney McKnight, modern day person, don’t treat me like a slave, okay?” 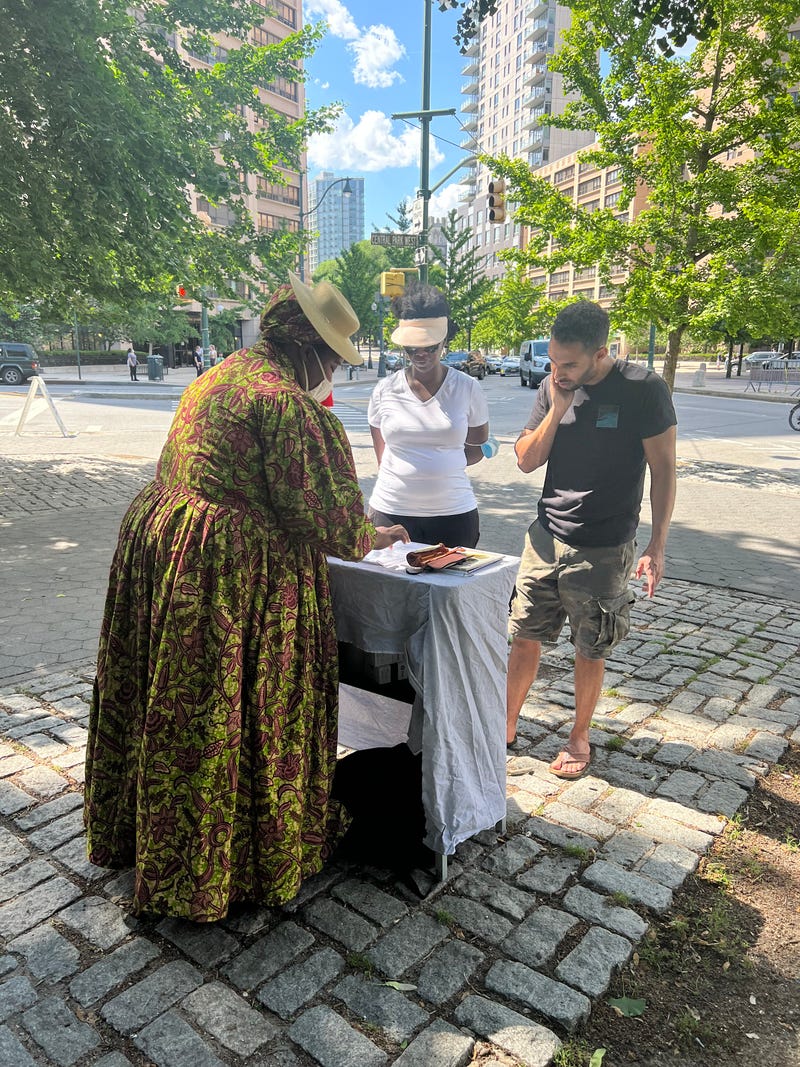 McKnight’s outfit and blunt sign draws a lot of attention. People do double takes or snap photos and McKnight encourages them to come chat.  When onlookers do approach her, McKnight says the interactions are usually pleasant, with most people just generally shocked that slavery even existed in New York City.

Every so often, some folks take issue with McKnight’s pop-up tables, but she reiterates that her intention to not be political, just factual. In instances like these, McKnight said she reverts back to the data and makes a point to center real people’s stories–from enslaved potters to poets–and doesn’t attempt to engage with people who aren’t willing to have nuanced conversations.

“It's so needed. People need a safe place where they can ask questions, because it is scary,” McKnight said. “I“It can be scary for a white person to admit they know little to nothing about the Black experience in America and say ‘I don't know this’ but I want to ask you, where do I start?’ ‘What do I need to know about this?’ And this is a good starting place for those people.” 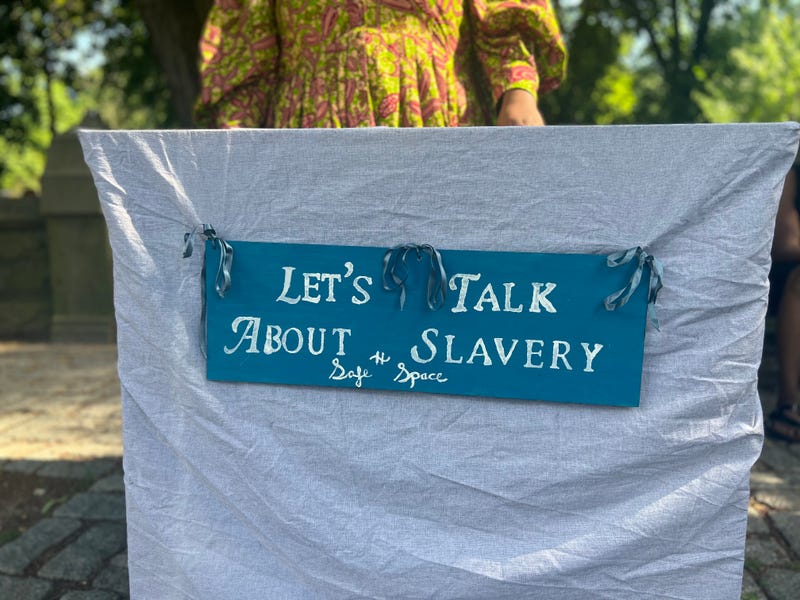 As McKnight explains, her informal tables are aimed at attracting people who probably won’t go to an exhibit about slavery or race in America on their own. She meets the public where they are, bringing the information to them rather than relying on them to seek it out.

The ‘Let’s Talk About Slavery’ table is just one of the McKnight attempts to connect with a larger, more diverse audience. She also runs several social media accounts with her brand 'Not Your Momma’s History' garnering over 100,000 followers. Her TikTok videos and YouTube series’ range in topics from “The Reproduction Hoe Show” where she shows and tells about historical reproductions and artifacts related to sex, women’s health and birth or step-by-step cooking videos and historical site travel vlogs.

A major part of McKnight’s work is also educating staff at museums and institutions on how to better interpret resources in order to more accurately teach visitors about slavery. The biggest takeaway she wants most of her clients to walk away with is to simply view people as people, treating the stories and lives of enslaved people with the same level of compassion many folks give figures like George Washington.

But despite the difficulty with reframing perspectives at the institutional level, McKnight says there have been drastic positive changes in the field since it piqued her interest almost ten years ago. 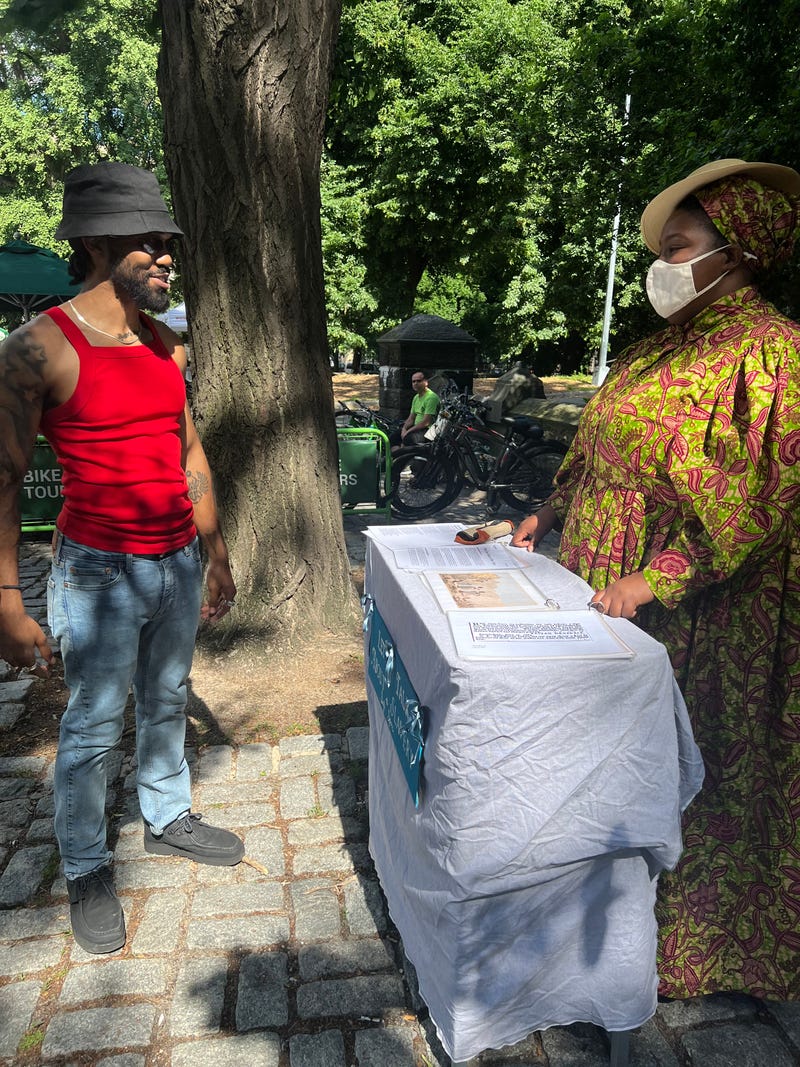 “It’s night and day,” McKnight explained. “I’ll say about eight years ago, the shift really started happening. People started talking more about enslaved persons. They're starting to move toward a ‘people first interpretation,’ and away from just dates.”

With all the time and effort McKnight invests in museums and exhibits, she hopes people, especially non-Black communities, will take an interest in seeing these places and learning about these topics during the other 364 days a year too, not just Juneteenth.

“This is really supposed to be meant as a celebration day and not just an ‘oh, we need to go to a museum and learn about [slavery],’” McKnight said. “That's something you need to be doing all year. And then take Juneteenth to be like ‘Woo, we free!”