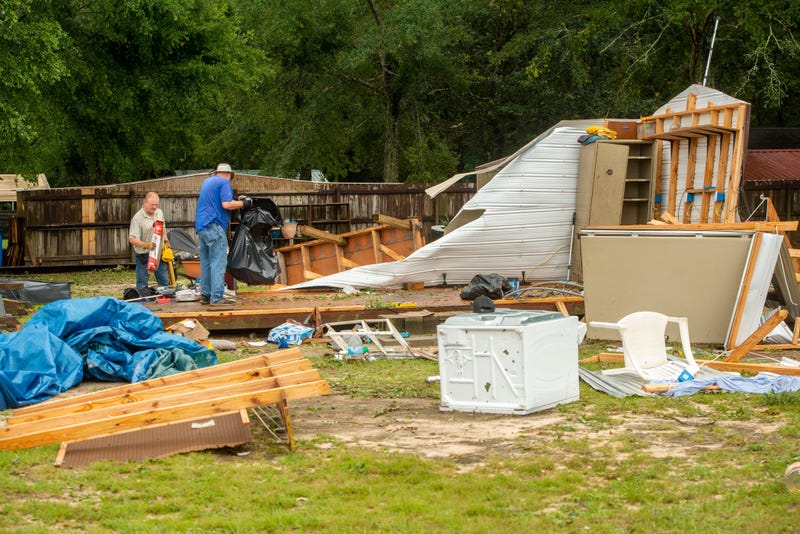 Volunteers in the community help clean up the property of a resident whose roof blew off their home on Wallace Dr. in Pace early Saturday morning during Tropical Storm Claudette, no one was injured. Photo credit John Blackie / via Imagn
By Joe Hiti, WWL

A life-threatening flash flood warning has been put in place for parts of the Deep South, mainly central Alabama, as Tropical Depression Claudette traveled over coastal states early Sunday morning. The depression is reaching across Alabama up to parts of North Carolina.

Claudette was named after qualifying as a tropical storm early Saturday morning when the storm’s eye had already been ashore. Since then, it has caused flooding throughout the south, in some places as high as 13 feet.

Watch #Claudette's ongoing trek across the southeast U.S., producing heavy rain and gusty winds. It's expected to regain tropical storm status as it reaches the Atlantic Ocean (with a tropical storm warning in effect for the NC coast), then quickly move northeast away from land. pic.twitter.com/SEZbuTSwXk

NEW VIDEO: Backyards have been turning into raging rivers in Northport, AL, after #Claudette dropped up to a foot of rain. #ALwx pic.twitter.com/ooXRclvfhH

Crazy video coming in from #Alabama as #Claudette moved inland bringing lots of #flooding and #stormsurge with it. #alwx pic.twitter.com/m8LiDJCrVS

The flooding resulted in 20 people needing to be rescued by boat in Northport, Alabama, according to WVUA-TV.

From WVUA’s Kayla Smith: NORTHPORT—On Hunter Creek Road, Northport Fire and Rescue personnel say more than 20 people have been rescued by boat. The floodwater is about 5 or 6 feet deep in places. The water has impacted roughly half of the homes on this road. @wvua23 #alwx pic.twitter.com/WTB4Y5hHaI

The high winds have also wreaked havoc, leaving a path of downed trees and damaged houses in several states throughout the south.

AFTERMATH: Damaged homes, downed trees and other debris is seen scattered across yards and roads in East Brewton, Alabama in the wake of Tropical Storm Claudette. https://t.co/Umwon0gAkI pic.twitter.com/hGeYMMaKtb

Winds in some parts of Florida reached 85 mph causing an 18-wheeler to flip over onto its side.

The National Hurricane Center located the storm about 85 miles west-southwest of Atlanta, with sustained winds of 30 mph as it moved east-northeast at 13 mph, in an advisory Sunday morning.

The high winds have also resulted in tornado warnings being issued in parts of Alabama, Mississippi, the Florida panhandle, and southwestern Georgia. One tornado touched down in Blakely, Georgia, at 1:38 p.m. on Saturday. It was moving north at 30 mph, according to NWS Tallahassee.

Claudette was expected to cross into the Atlantic Ocean once again on Monday and regain tropical storm strength while over eastern North Carolina, according to the Associated Press.

As of now, the storm is beginning to hit parts of North Carolina, and parts of the storm may even impact Washington D.C., continuing on its path of destruction.

The remnants of #Claudette (now a tropical depression) will pass to our south & east over the next 36 hours. While impacts on the DC region won't be direct, there will be some tropical moisture in the atmosphere that thunderstorms could tap into on Monday/Tuesday. pic.twitter.com/iLxy6dKEcb