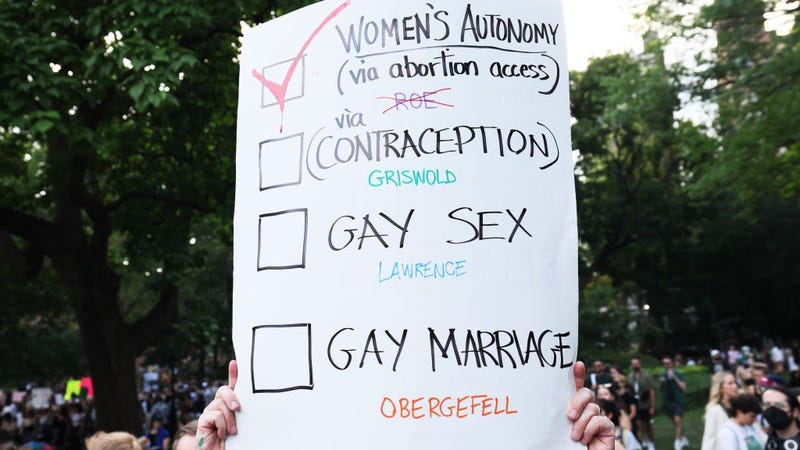 The House is set to vote this week to try to protect same-sex marriage and contraception throughout the country, due to concerns following the U.S. Supreme Court's decision last month in the Dobbs v. Jackson Women's Health Organization case, overturning abortion rights established by Roe v. Wade.

The House will vote on the Respect for Marriage Act on Tuesday, establishing protections for same-sex marriages, according to Majority Leader Steny Hoyer's office, per NBC News.

They are then expected to vote on the Right to Contraception Act later this week, which would establish protection for the access to birth control.

According to the Associated Press, the Respect for Marriage Act is expected to pass in the House, but is unlikely to pass in the Senate, "where most Republicans would likely join a filibuster to block it."

"The MAGA radicals that are taking over the Republican Party have made it abundantly clear they are not satisfied with repealing Roe," Senate Majority Leader Chuck Schumer (D-N.Y.) said.

Over the weekend on his podcast, Sen. Ted Cruz (R-Texas) said that the SCOTUS decision in Obergefell v. Hodges to legalize same-sex marriage "was clearly wrong."

"In Obergefell, the court said, 'No, we know better than you guys do, and now every state must, must sanction and permit gay marriage,'" Cruz added. "I think that decision was clearly wrong when it was decided. It was the court overreaching."

House Majority Leader Steny Hoyer issued a statement on the vote, saying that "it is critical to ensure that federal law protects those whose constitutional rights might be threatened by Republican-controlled state legislatures," according to CNN.

"LGBTQ Americans and those in interracial marriages deserve to have certainty that they will continue to have their right to equal marriage recognized, no matter where they live," Hoyer added.

House Speaker Nancy Pelosi discussed the votes on the two bills in a letter to House Democrats, "as extremist Justices and lawmakers take aim at more of our basic right."

"This week, the House will pass two more bills to protect freedom in our nation, as extremist Justices and lawmakers take aim at more of our basic rights," she wrote. "Our Right to Contraception Act will preserve the essential protections found in Griswold v. Connecticut. Our Respect for Marriage Act -- which, proudly, is bipartisan and bicameral -- will defend the right to marry whomever you love, as found in Obergefell v. Hodges and Loving v. Virginia."

According to a Gallup poll from June 1, 71% of the U.S. supports marriage between same-sex couples, a one percent increase in support from 2021.