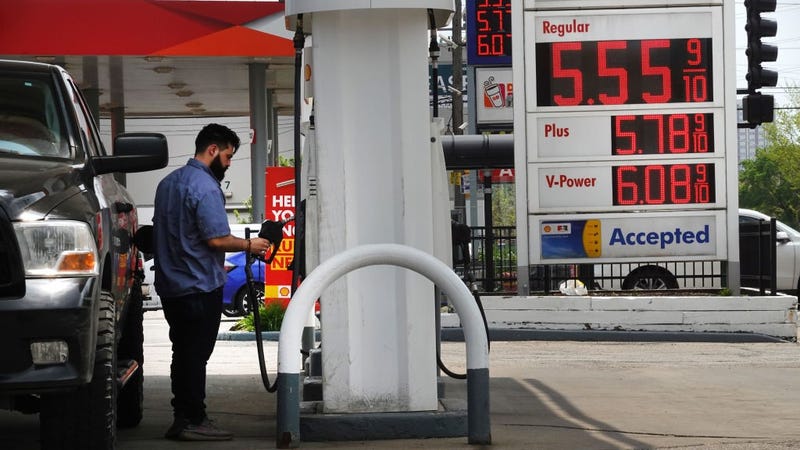 CHICAGO, ILLINOIS - MAY 10: A customer purchases gas at a gas station on May 10, 2022 in Chicago, Illinois. Photo credit Scott Olson/Getty Images
By Colin Martin, Audacy

Gas prices continued to rise in the United States over Memorial Day Weekend as the national average is up to $4.62 per gallon as of May 31, according to AAA.

Now, experts are predicting that the national average could hit $5 per gallon before Father's Day towards the end of June.

Patrick De Haan, head of petroleum analysis at GasBuddy, tweeted on Tuesday that the estimated date for the national average to reach $5 per gallon is Friday, June 17.

On Monday, European Union leaders agreed to ban 90% of Russian crude oil by the end of 2022 due to the ongoing invasion of Ukraine. Prices have started to rise again, as "a barrel of West Texas Intermediate crude was up $3.94 to $119.01 per barrel in early trade, nearly $8 per barrel higher than last week Monday," according to GasBuddy.

De Haan provided some insight on the actively rising gas prices in a statement posted to the GasBuddy website on Tuesday.

"After several weeks of soaring gas prices, last week saw prices nationally slow down ahead of Memorial Day, but I’m afraid the good news ends there," De Haan said. “While gasoline demand has been seasonally soft, the large decline in refining capacity over the last few years has meant that refiners are struggling to produce even lower amounts of refined products.

"This has led inventories to struggle to see any gains, boosting concern that they won’t be able to catch up. Coupled with continued talk that the EU is still working on sanctioning Russian oil, even though Hungary is a hold out, oil markets are quite on edge. As a result of the continued decline in gasoline inventories in recent weeks, wholesale gas prices surged last week, which will likely boost prices at the pump in short order."

De Haan continued by saying new record prices could start this week in the Great Lakes region and then gas will become $5 per gallon nationwide very soon.

"Motorists in the Great Lakes could see prices jump early in the week to new record highs, and the rest of the nation will follow," De Haan said. "Odds are rising that we’ll eventually see the national average reach that dreaded $5 per gallon."

Diesel prices have been steady during this time, but are still far more expensive than they were a year ago. The national average for diesel is currently $5.521 per gallon, which is a bit more compared to $5.256 last month, and a huge jump from $3.186 in 2021.