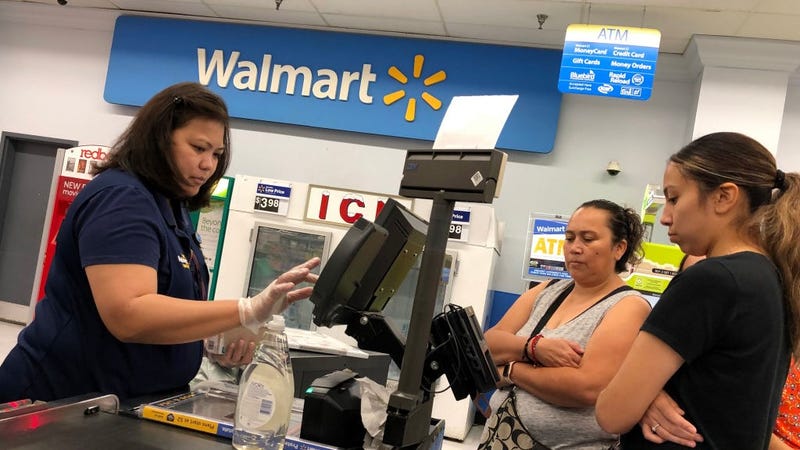 RICHMOND, CALIFORNIA - AUGUST 15: Customers look on as a Walmart cashier rings up their purchases at a Walmart store on August 15, 2019 in Richmond, California. Photo credit Justin Sullivan/Getty Images
By Colin Martin, Audacy

Despite supply chain issues caused by the COVID-19 pandemic and ongoing worker shortages, Walmart held on to the top spot as the world's largest company by revenue for 2021, according to the Fortune 500 rankings released in August last year.

Walmart is not slowing down anytime soon, and announced on Wednesday that they plan to hire 50,000 more workers by the end of the current financial quarter that ends in April, per the Wall Street Journal.

The retail giant's announcement comes not long after they said in September 2021 that they had plans to hire about 150,000 workers for the holiday season, according to CNBC. Walmart said at the time that most of those jobs would be permanent, and the Wall Street Journal added that they ended up hiring 100,00 workers in the year ending in January.

Walmart currently employs nearly 2.3 million workers worldwide over about 10,500 stores, with about 1.6 million in the United States across 4,743 locations.

Walmart said in their statement that they hired 5,500 pharmacists/pharmacy managers in 2021, a record for a one-year period. Additionally, they hired more than 13,000 pharmacy technicians, and a company record of about 4,500 truck drivers to help supply chain issues.

They said in the statement that the average hourly rate is $16.40 per hour, and similar to Target, the starting wage could be up to $30 per hour "in select roles and locations." Walmart offers its associate workers the ability to enroll in a 401k plan on their first day of work, and said that they will match contributions up to 6% after the first year of employment.

Donna Morris, Walmart's chief people officer, told the Wall Street Journal that the company is trying to improve their hiring process and offer workers a place they can build their careers.

Walmart understands the challenges that people have faced throughout the pandemic and is also offering 24/7 access to counseling services to help workers with their mental health.

"Emotional well-being is equally important," Walmart said in their statement. "We offer 24/7 confidential counseling services with licensed therapists at no cost to all U.S. associates and their family members. We provide well-being resources via Thrive Global, a company focused on ending the stress and burnout epidemic, to support our people in ways that matter most."