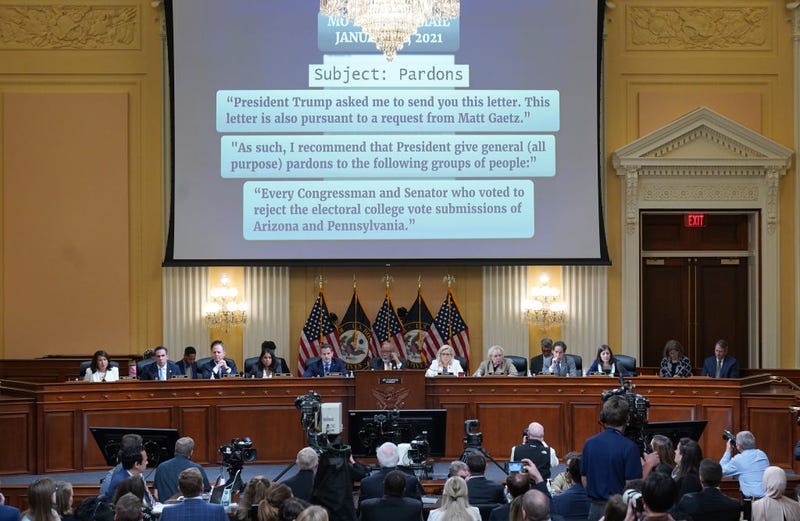 Communication about presidential pardons are shown during the fifth hearing held by the Select Committee to Investigate the January 6th Attack on the U.S. Capitol on June 23, 2022. Photo credit Getty Images
By Stephanie Raymond, KRLD

The House select committee investigating the Jan. 6, 2021 attack on the United States Capitol named a half-dozen Republican lawmakers who allegedly requested presidential pardons in the days after the riot in an apparent attempt to shield themselves from potential prosecution.

The names were revealed at the end of Thursday's hearing, which focused on former President Donald Trump's efforts to use the Justice Department to overturn the results of the 2020 election.

"The only reason I know to ask for a pardon is because you think you've committed a crime," said Rep. Adam Kinzinger of Illinois, one of two Republicans on the committee.

According to the committee, Brooks sent an email to the White House five days after the insurrection with the subject line "Pardons", requesting them for himself, Gaetz and "every congressman or senator who voted to reject the electoral college vote submissions of Arizona and Pennsylvania."

Gaetz, meantime, had been asking for a pardon since "early December," according to a taped deposition from Cassidy Hutchinson, a former aide to White House Chief of Staff Mark Meadows. Hutchinson said Gohmert, Biggs and Perry also requested blanket pardons through Meadows' office.

Hutchinson also testified that Patrick Philbin, the deputy counsel to the president, told her that Greene asked the White House Counsel's Office for a pardon.

Ultimately, none of the lawmakers were granted pardons.

Following the hearing, Biggs and Perry released separate statements denying they ever asked to be pardoned.

"At no time did I speak with Miss Hutchinson, a White House scheduler, nor any White House staff about a pardon for myself or any other Member of Congress — this never happened," Perry told NBC News.

Greene didn't deny the allegations, but she did address Hutchinson's testimony.

"Saying 'I heard' means you don't know. Spreading gossip and lies is exactly what the January 6th Witch Hunt Committee is all about," Greene tweeted.

Gaetz also did not deny the claims, though he wrote on Twitter: "The January 6 Committee is an unconstitutional political sideshow. It is rapidly losing the interest of the American people and now resorts to siccing federal law enforcement on political opponents."

Gohmert denied that he ever requested a pardon for himself and called the committee hearing "nothing more than a Soviet-style propaganda production."

"Their blatant and disgusting attempt to mislead the public by implying that my documented requests for pardons for other deserving individuals was a request for a pardon for myself is malicious, despicable, and unfit for a U.S. Congressional hearing," he tweeted.

Gohmert went on to say he requested pardons for "U.S. service members and military contractors who were railroaded by the justice system due to superiors playing politics... all far prior to, and completely unrelated to January 6" and that "any assertion to the contrary is unequivocally and maliciously false."

Brooks is the only lawmaker to confirm he asked for a pardon. According to NBC News, Brooks told reporters he had spoken directly with Trump about presidential pardons, and that Trump told him to put his request in writing.