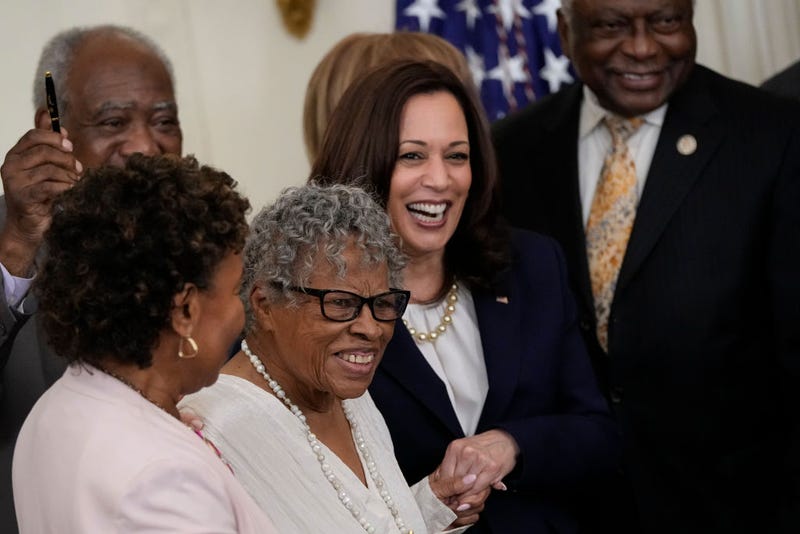 94-year-old activist and retired educator Opal Lee, known as the Grandmother of Juneteenth, holds hands with Vice President Kamala Harris as U.S. President Joe Biden signs the Juneteenth National Independence Day Act into law in the East Room of the White House on June 17, 2021 in Washington, DC. The Juneteenth holiday marks the end of slavery in the United States and the Juneteenth National Independence Day will become the 12th legal federal holiday — the first new one since Martin Luther King Jr. Day was signed into law in 1983. Photo credit (Photo by Drew Angerer/Getty Images)
By Lauren Barry, KRLD

Last year, Opal Lee – a 95-year-old educator from Texas – saw a dream come true when President Joe Biden declared Juneteenth a national holiday. Since 2016, “the grandmother of Juneteenth” has been organizing walks to promote the holiday.

This year, Lee is taking another annual walk in the Dallas-Fort Worth area. For the second year in a row, it will be a victory lap in addition to a call for action.

“The last time I had walked I was so happy, because we had been to the White House, the president had signed the bill to make it a national holiday – and I was happy enough to do a holy dance. Except, the kids started twerking,” she said, with a chuckle, of the 2021 celebration.

Back in 2016, Lee created a 1,400-mile route from Fort Worth to Washington D.C. to advocate for Juneteenth. Then, she organized a 2.5-mile walk to recognize the 2.5 years it took for former slaves in Galveston, Texas to learn that they had been freed.

According to the National Museum of African American History and Culture, the Emancipation Proclamation of Jan. 1, 1863 could not be enforced in some areas still under Confederate control after the Civil War. It took until June 19, 1865 for 2,000 Union troops to march into Galveston Bay, Texas, and enforce the freeing of 250,000 enslaved Black Americans. Since then, the day has been known as “Juneteenth.” 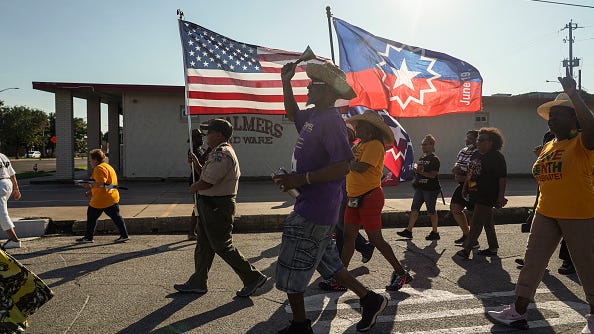 Over more than 100 years, there had been previous attempts to make Juneteenth an official holiday. At 90, Lee decided she didn’t want to wait any longer.

Now, she is inviting people from all over to join her as she walks to commemorate freedom.

“So, if we start at 10 o’clock, in California they are going to start at 8 a.m., in Philadelphia and Atlanta at 11 a.m., and its going to be simulcast,” she said of the June 18 event. “People all over the United States can see it. How about that for togetherness and unity and freedom? Now, if you can’t get with those groups, hey, you can walk around the school track for 2.5 miles, or on the treadmill at home.”

Even though Juneteenth has been made a national holiday, racial inequity continues to plague the U.S.

“There is still more work to do,” said Biden when he announced the holiday last year. “As we emerge from the long, dark winter of the COVID-19 pandemic, for example, racial equity remains at the heart of our efforts to vaccinate the Nation and beat the virus. We must recognize that Black Americans, among other people of color, have shouldered a disproportionate burden of loss — while also carrying us through disproportionately as essential workers and health care providers on the front lines of the crisis.”

So, this year, Lee hopes her march will inspire people to do even more to make freedom a reality for everyone in the U.S.

“Let’s get around to doing something about freedom,” she said.