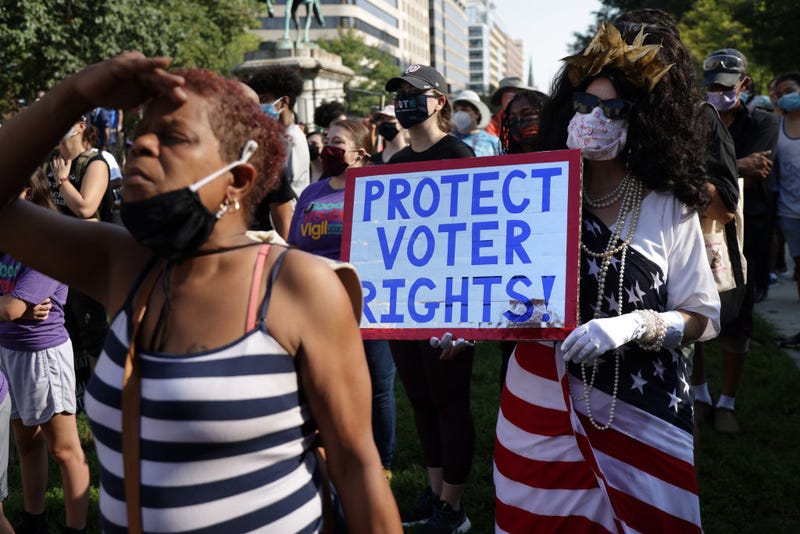 Voting rights activist Regina Cosio of Syracuse, New York, dresses as "Ms Liberty" as she participates in a pre-march rally during a March On For Voting Rights event at McPherson Square August 28, 2021 in Washington, DC. Activists gathered in Washington to mark the 58th anniversary of the 1963 March On Washington, where Dr. Martin Luther King delivered his “I Have a Dream” speech, and urged the Senate to pass voting rights legislations. (Photo by Alex Wong/Getty Images) Photo credit Getty Images
By Lauren Barry, WCCO

This bill, named after the late civil rights leader and U.S. Congressman John Lewis, would increase the power of the federal government to block discriminatory election rules, explained CNN. When he was demonstrating for civil rights in 1965, Lewis was beaten by white police officers so badly that he suffered a broken skull.

Members of the House of Representatives passed the legislation earlier this week, but it faces an uncertain fate in the Senate, where most Republicans oppose it, said CNN.

Recently, Georgia created stronger requirements for absentee voting, Arizona authorized removing voters from the rolls if they do not cast a ballot at least once every two years, and both Florida and Georgia cut back sharply the use of drop boxes for mail-in ballots, reported the New York Times.

More voting restrictions were approved Friday by the Texas House of Representatives, said CNN. Opponents of the restrictions argued that it would make it harder for people of color and disabled people to vote by ending all night and drive-through voting options.

Today all marches & rallies in WDC & around the country will be conducted to save democracy, our right to vote & to urge US Senators to pass S.1 the comprehensive For The People Act & HR 4 the John Lewis Voting Rights Amendment Act to correct the damage in the Shelby decision. pic.twitter.com/q7ZKRettt8

Rev. Jesse Jackson, who was hospitalized last week for COVID-19, said in a statement he will not be attending the march Saturday because he is still receiving medical care.

“So we want everybody to put on your marching shoes, and keep them on until everyone's right to vote is protected,” Jackson said. “Keep marching and keep hope alive.”

This weekend’s March On for Voting Rights also marks the 58th anniversary of the historic March on Washington, where Martin Luther King, Jr., delivered the “I Have a Dream” speech. Last year, the 57th anniversary march came on the heels of protests worldwide spurred by the murder of Black man George Floyd at the hands of a white police officer.

Martin Luther King III, King Jr.'s eldest son is leading Saturday's march. He said he has seen fervor in the demonstrators who rallied across the country after Floyd's death and showed up at last year's anniversary march, according to CNN.