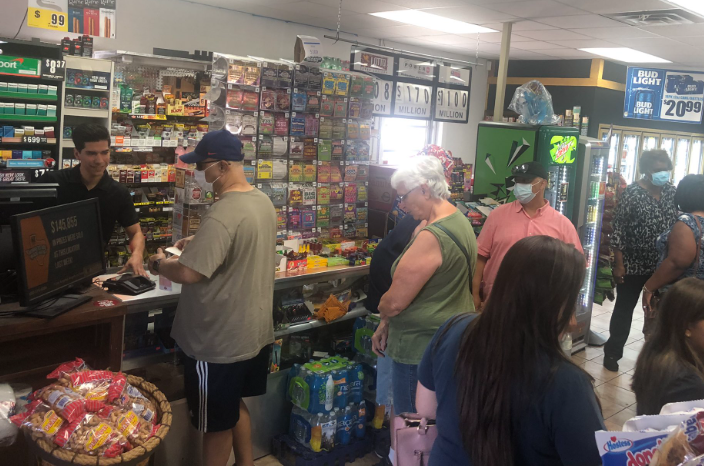 The Mega Millions jackpot prize for the Friday night drawing has been increased to an estimated annuitized $1.28 billion due to increased sales and excitement among lottery players across the nation.

North Texans started lining up at convenience stores as soon as they opened Friday morning to take their shot at winning the jackpot.

One man waiting in like at Chuck’s Grocery in Arlington says he's won smaller jackpots before from that particular store. He's hoping for a bigger jackpot today.

Chuck’s grocery in Arlington has sold more winning lottery tickets than anyplace else in Tarrant County. Owner has set up a Wall of Winners, saying he had a $100,000 winner last week. “It’s fun, just the excitement & imagining what you’d do with winnings like that. pic.twitter.com/qFu0MLrQs4

The jackpot is the second largest jackpot prize in game history and the third largest in U.S. lottery history. Friday’s drawing offers a cash value worth an estimated $747.2 million

Another woman says her office pool has swelled to 58 players, each putting in $20 for a shot at a big payoff. “They call this the lucky store. I saw all the winners posted on the wall, thought I’ll purchase some tickets, see what I can do.”

She says she's going to several different stores across North Texas instead of buying them all in one place in case one spot is luckier than another.

The #MegaMillions line at Chuck’s Grocery in Arlington now stretches through the store. I just bought the newsroom’s tickets. Just FYI if you hear dead air Monday morning. pic.twitter.com/wCrTpmhRmM

Friday’s drawing will be the 30th in the current Mega Millions jackpot run since starting as an estimated annuitized $20 million for the April 19 drawing.

This is the largest Mega Millions jackpot up for grabs since the Oct. 23, 2018 drawing when it reached an estimated $1.537 billion – the game’s largest jackpot prize, which was won by an out of state player.

Texas has had 13 Mega Millions jackpot prize winners since it joined the game in 2003. Its most recent jackpot winner came in September 2019 when a Leander resident won an estimated annuitized $227 million, the largest prize ever paid out to a single Texas Lottery player.