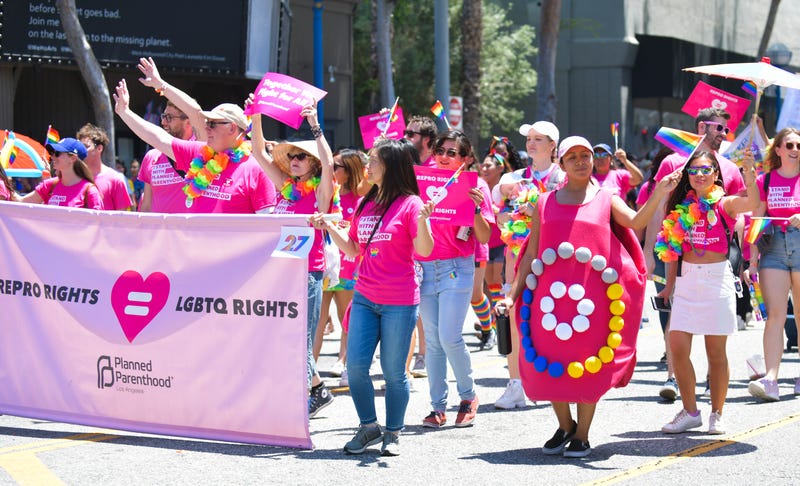 "NYC Pride is pleased to welcome Planned Parenthood as a featured marching contingent at tomorrow’s NYC Pride March," Heritage of Pride said in a statement. "Planned Parenthood will be the first group to step off at noon on Sunday June 26."

"As millions gather for LGBTQIA+ Pride this weekend in New York City and cities across the country, our voices will be heard -- for the LGBTQ people impacted and the millions with whom we stand in solidarity," Heritage of Pride, the organization behind the official NYC Pride roster of events, said in the statement. "Join us as we advocate for bodily autonomy at this year's NYC Pride March."

Addressing Friday's Supreme Court ruling, the organization said, "overturning nearly five decades of protections and reproductive freedom is devastating, This dangerous decision puts millions in harm’s way, gives government control over our individual freedom to choose, and sets a disturbing precedent that puts many other constitutional rights and freedoms in jeopardy."

Know this: We will never stop fighting to get you the care you need. We can’t and we won’t back down. pic.twitter.com/o7j0az715F

The Planned Parenthood of Greater New York Action Fund said Friday, following the ruling's release, "This is a day of anger, sadness, frustration, and heartbreak — but as we each process and grieve in our own way, we all know one thing to be true: This won’t stop us. We are the majority and we aren’t going anywhere."

The NYC Pride March will begin at noon on Sunday at 25th Street and 5th Avenue. Participants will proceed downtown on 5th Avenue before heading west on 8th Street. After crossing over 6th Avenue, the March will continue on Christopher Street, passing the Stonewall National Monument. It will then turn uptown on 7th Avenue, passing the New York City AIDS Memorial, before dispersing in Chelsea at 16th Street and 7th Avenue. With Roe over, some fear rollback of LGBTQ and other rights