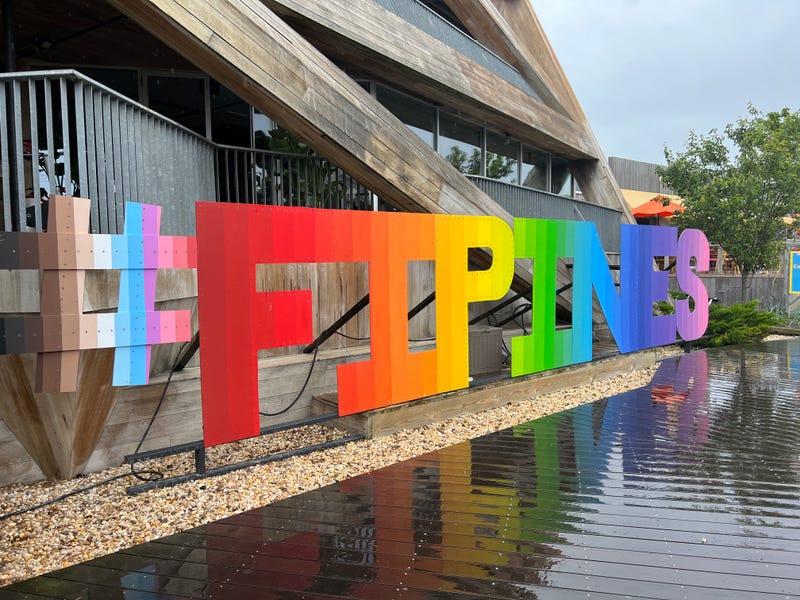 A sign for the Fire Island Pines decked out in the colors of the rainbow greets you at the ferry dock Photo credit Emily Nadal
By Emily Nadal, WINS

NEW YORK (1010 WINS) — John Dempsey and his husband did not intend to buy a home on New York’s Fire Island. But after stumbling upon an open house at a quaint beach home one summer evening eight years ago while staying with friends on the island, the pair decided to go for it.

“We fell in love with this house,” Dempsey told 1010 WINS. “And what was interesting to us is that most of the homes here are sold fully furnished because of the pain of getting everything back off the island. So the home comes filled with books and art and old magazines.”

Dempsey and his husband unknowingly purchased the 1962 cottage of Bette Davis’ hairdresser. He’d often spend his mornings, coffee in hand, flipping through the old documents and relics of the past, including a few autographed photos of Bette Davis and other celebrities, learning about the history of his new community. 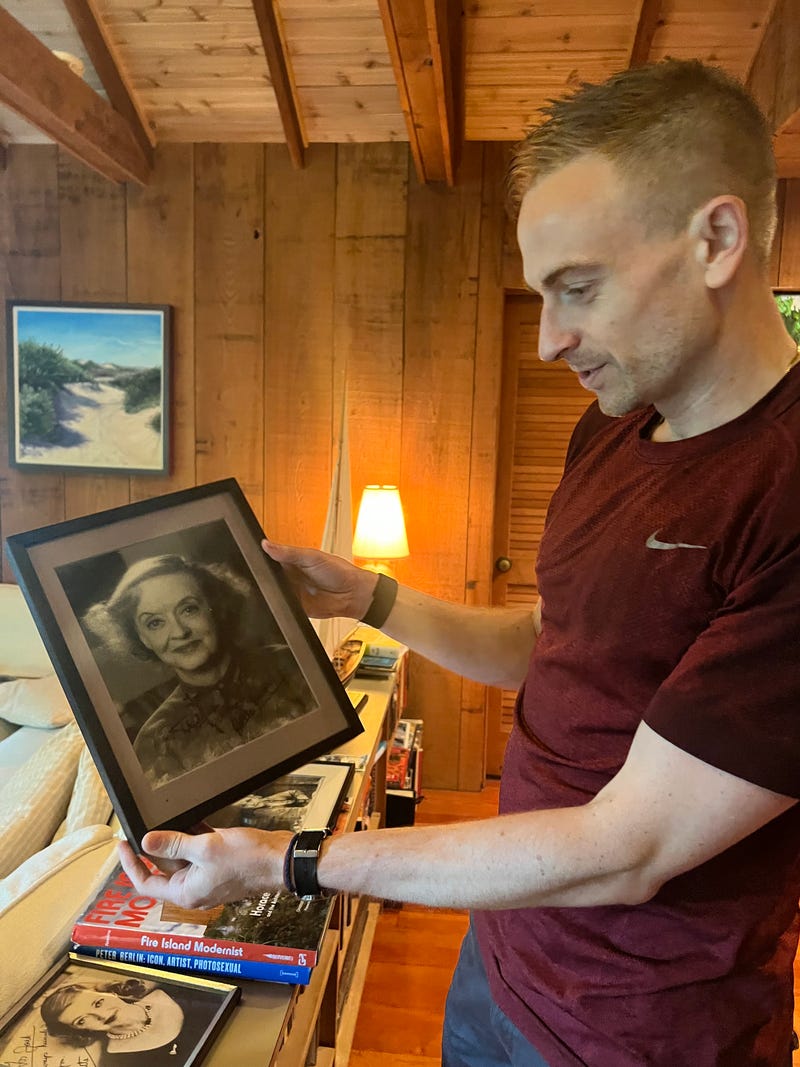 “And it was through learning about the house and its history that I got involved with the Historical Society out here,” Dempsey explained.

Dempsey’s museum-esque home is not unique to the Pines, the neighborhood on Fire Island where he lives. The 26-mile-long barrier island off of Long Island is made up of 17 unique communities which all offer an oasis of a different kind. For more than 60 years, the Pines has served as a haven for gay people. But it wasn’t always that way. 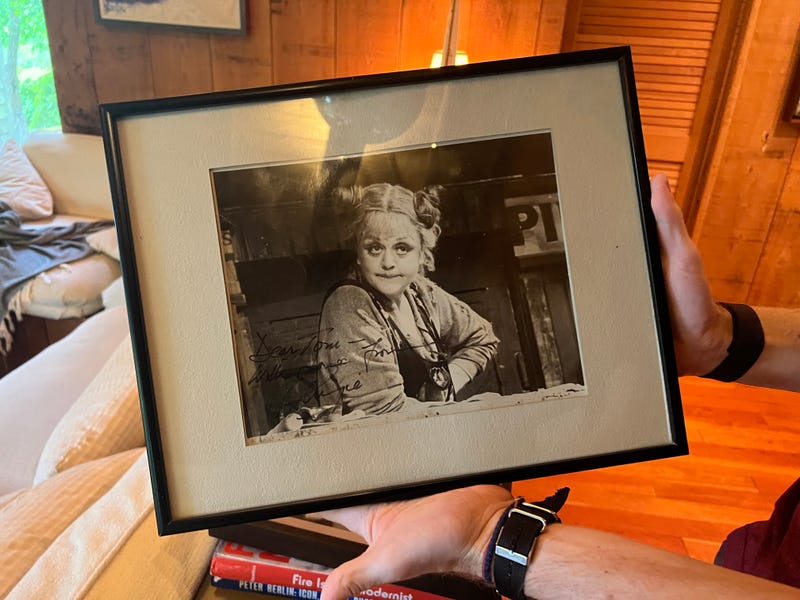 Back in the 1940’s, the area of Fire Island where Dempsey’s home is served as a Coast Guard station that would watch for enemy ships during World War II. It was later rebranded in the 1950’s as Fire Island Pines after the harbor was dredged out by the Home Guardian Company. Fishermen and families were targeted as their sought after clientele. The company, owned by brothers Dr. Warren and Aruthur Taussig, sold lots for $750. Within two years, the lots were all snatched up and small cottage houses were built on top, including Dempsey’s. 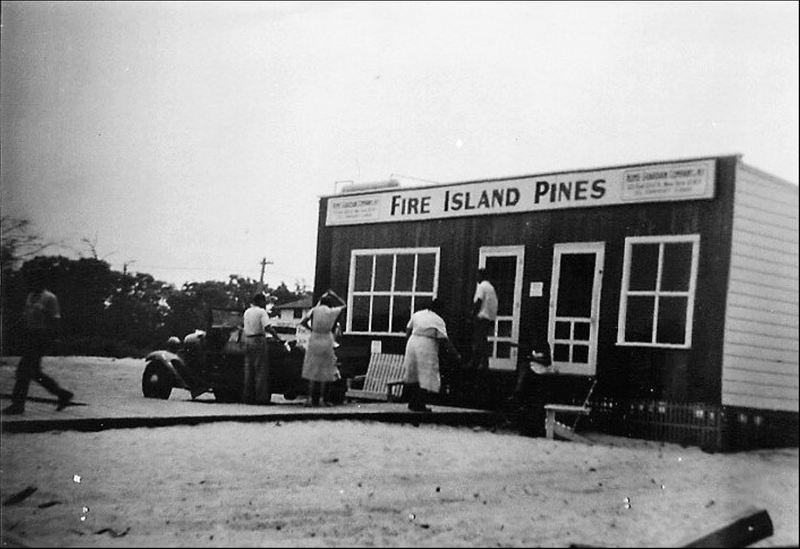 During the same time period, however, the neighboring community of Cherry Grove had already been established as a bustling gay town, so many were flocking to the Pines to purchase land and homes, especially those in the theatre or literary business.

“The original area was branded as a family community,” Dempsey explained. “And there were even board meetings held to question the presence of the gay community here. They put up a big sign in the harbor that said: ‘We believe in a community that is clean both morally and physically. We believe that riotous parties disturb the peace and quiet in our community. We believe bikini type bathing apparel tends to lower the moral standards of the community. We believe that exhibitionism in public is below the level of human behavior.’” 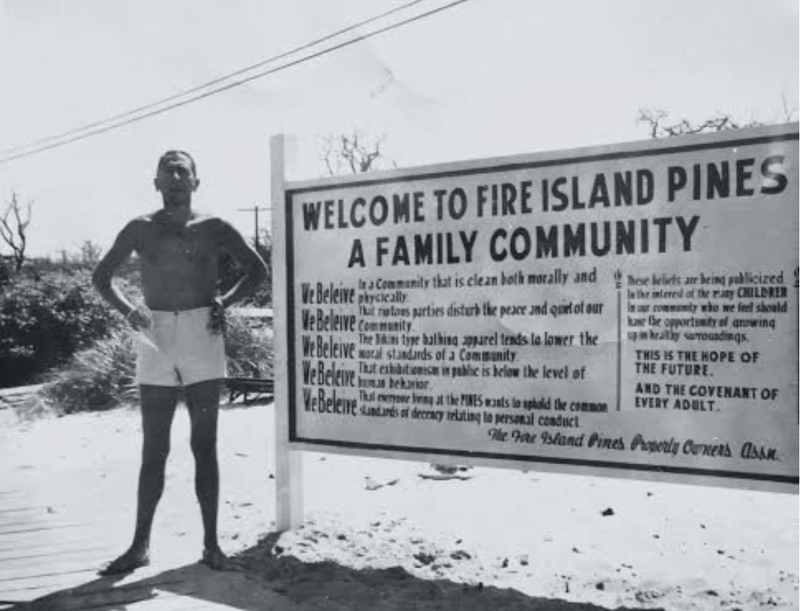 The Taussig brothers believed the sign would discourage gay people from buying homes in the Pines and it caused quite a bit of controversy in the neighborhood. According to the Fire Island Historical Preservation Society, the sign would often “disappear” on weekends, having to be replaced several times, and it created a deep divide in the community.

But despite the pushback and outright prejudice, the gay population in the Pines kept growing. Taussig’s own daughter, Doris, spoke out against the discrimination, famously saying “The best thing that happened to the Pines was the gay influence.” Others spoke up too, including the Pines’ earliest resident Alice Thorpe, who proposed a truce between the gay and straight population, leading the community to take down the sign. 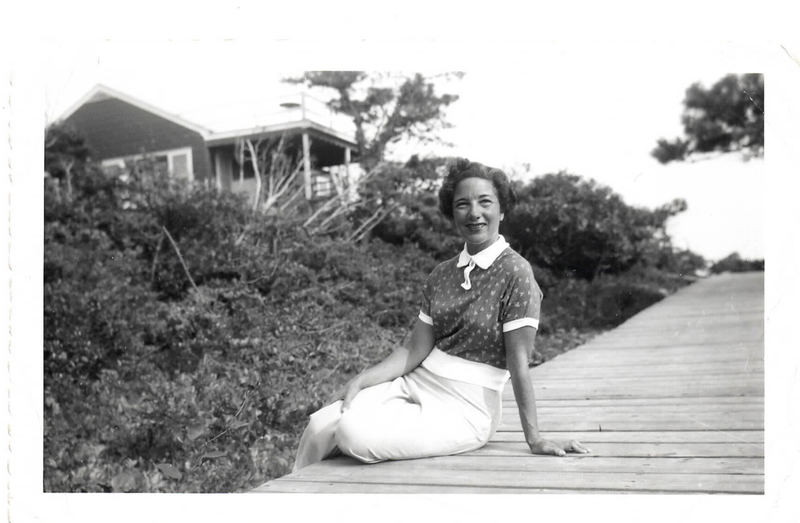 This story of perseverance is partially what motivated Bobby Bonanno to start the Fire Island Pines Historical Preservation Society in 2010. The mission of the organization is to “collect, preserve, display, and celebrate the rich and colorful history of the Fire Island Pines for present and future generations.”

Bonanno and other FIPHPS work to understand the Pines’ place in LGBTQ+ history, starting with its very beginning. Since the 60’s, the Pines had been an integral part of gay culture as the birthplace of the “tea dance,” an afternoon social where gay men and lesbian women could dance with same-sex partners with the availability to quickly switch to the opposite sex in the event of a raid. It was also the site of the infamous “Invasion” when drag queens protested discrimination in the 70s and a valuable place for information and protection during the 1980s AIDS crisis. 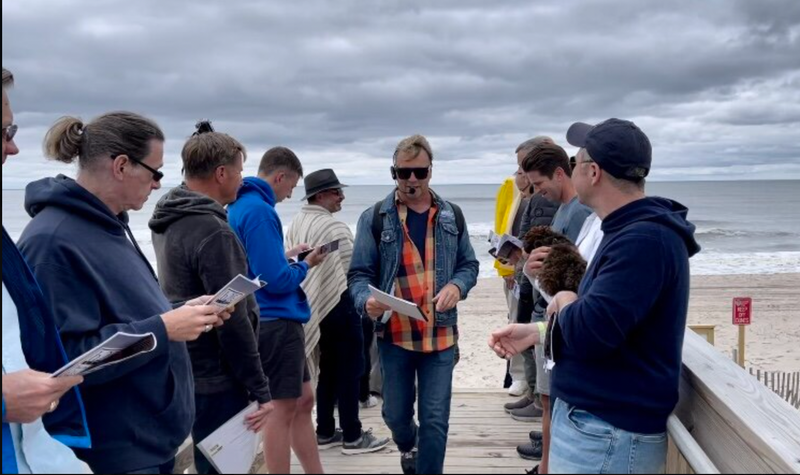 "People coming here, it is essential to me, that people know things happened here, things that allowed them to have the freedoms that they have now," Bonanno told ABC 7. "Yes, you can be gay anywhere in the world for the most part, but there is no gayer place than Fire Island, where you can be whoever you want."

Twelve years since the historical society was first established, the organization has grown to offer a wide variety of engagement events for the public interested in learning more about the community’s rich history. This July, FIPHPS partnered with the National Park Service (which oversees a portion of the island) to show a pop-up exhibit about the “Invasion,” as well as offering extensive archival documents and photos to view and even a walking tour of some of the notable homes in the neighborhood, led by Dempsey, who is a FIPHPS board member. 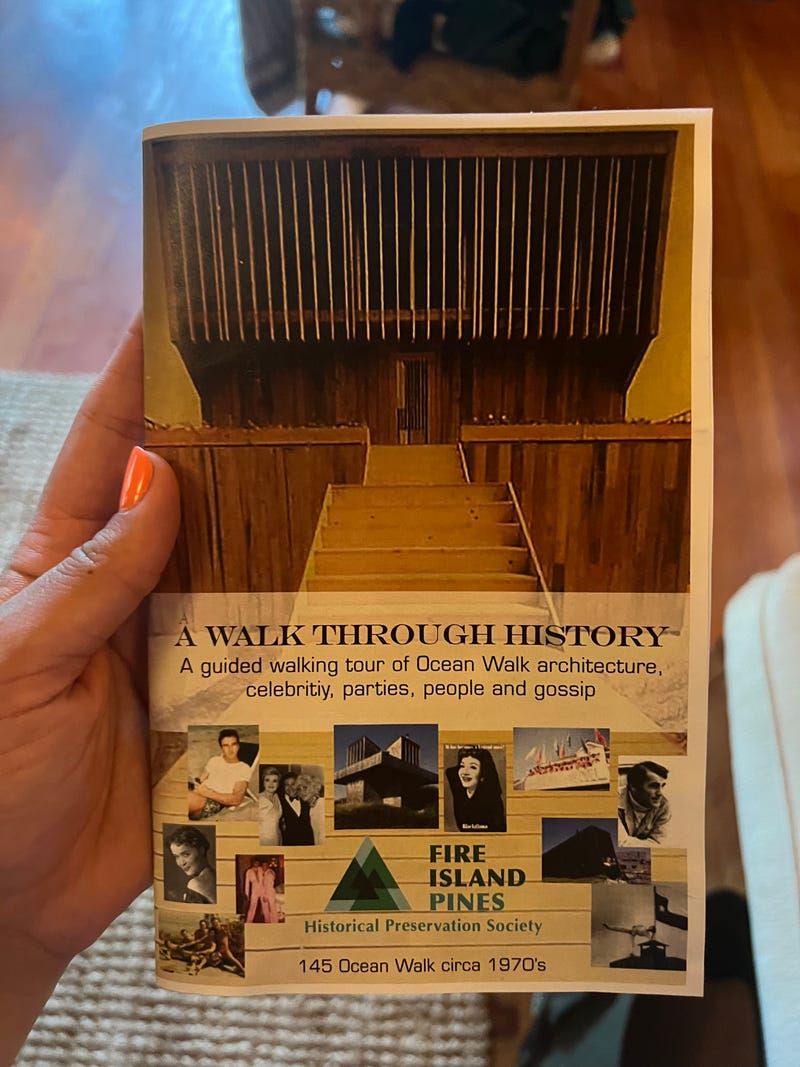 “It feels like there's a big resurgence of people who are really interested in their history,” Dempsey said. “I find there's a real hunger for people to learn about that history and not just take it for granted.”

The tours are a fairly new feature of the historical society but each one sells out, according to Dempsey. Even on a rainy day during Dempsey’s last plight, a group of nearly two dozen braced the weather and kept good spirits to attend. Participants eagerly listened and asked questions while huddling under umbrellas and striding in slippery, wet flip flops. 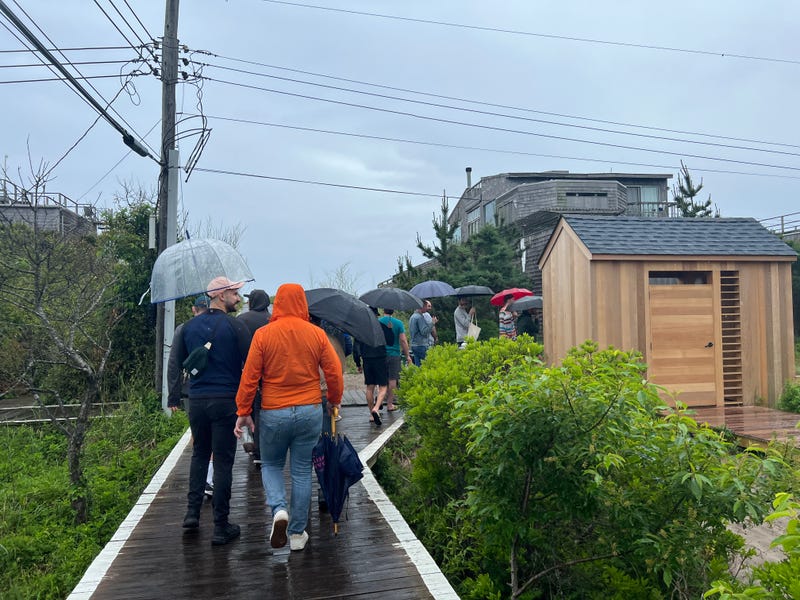 “By doing the tours, we're kind of meeting people where they are and being able to bring the history to them with something different and fun to do,” Dempsey said. “People are looking for a different type of activity that's not just drinking.”

Tour attendees awed at the beautiful seaside homes, remnants of a decades past, once belonging to stars like Calvin Klein or Frank O’Hara. The homes are also a reminder of some of the work the Pines has to do. While the area has been and still is a refuge for gay men, the population is overwhelmingly white, male and wealthy, which created a longstanding rivalry between the Pines and Cherry Grove. 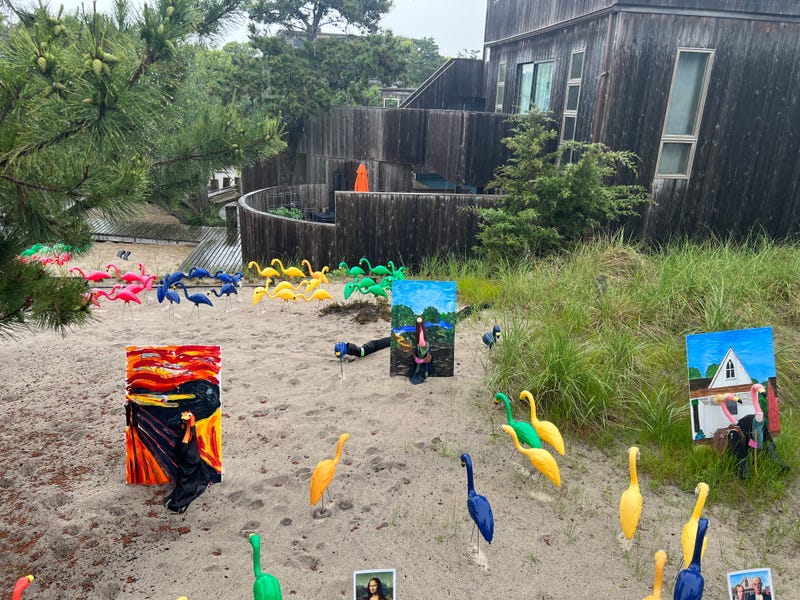 In the last decade or so, Dempsey said this dynamic has been shifting a bit, in large part due to the BOFFO artist in residency program who have made it a point to invite BIPOC and non-binary artists to the island, bringing their art as well as their voices.

“That type of representation, I think, has made a lot more people feel comfortable coming out here,” 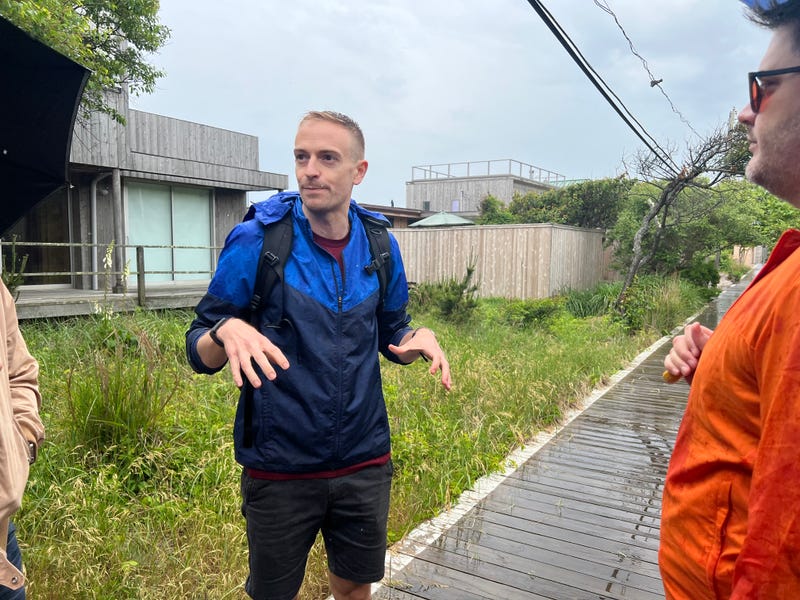 That, and Dempsey added, media representation, like Searchlight Picture’s new movie “Fire Island'' which features Bowen Yang who speaks to the Asian American experience at the Pines.

Since the pandemic struck, the Pines neighborhood, made up of 700 homes, has grown even bigger, with more diverse dwellers to include everyone from people working in finance to DJs and artists. Dempsey and his husband live in Manhattan during the off-season, but for the couple, the Pines is what they consider home and they’re looking forward to its continued perseverance and growth. 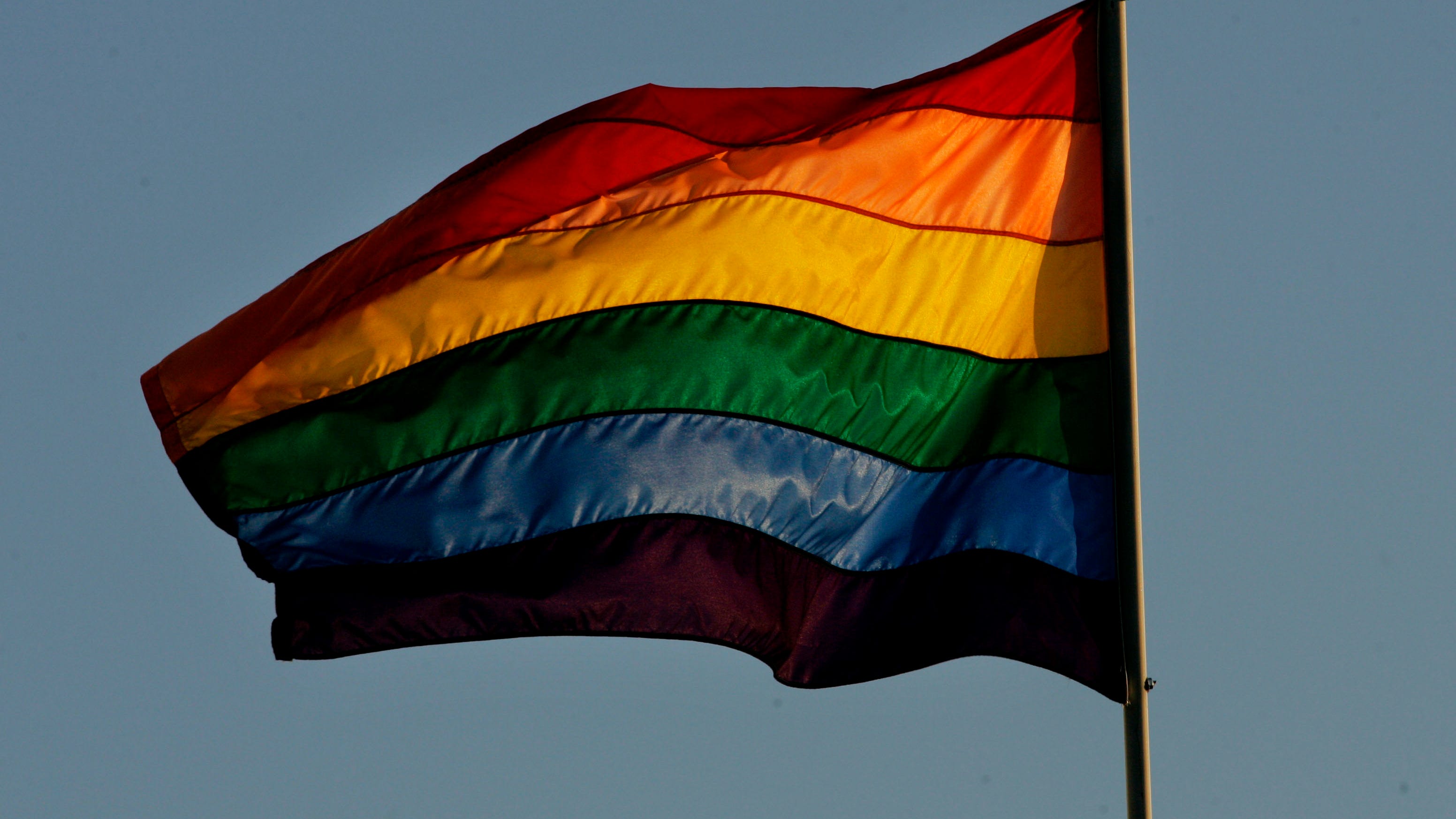