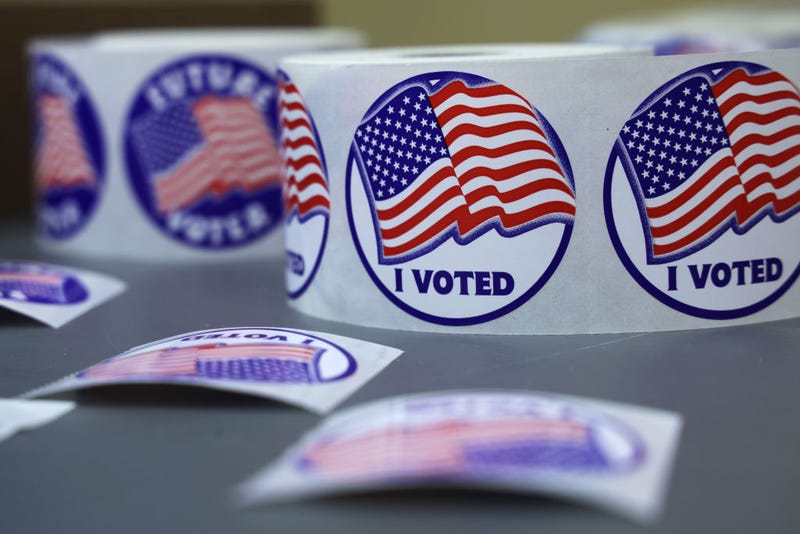 I Voted" stickers are seen at a polling station at Rose Hill Elementary School during the midterm primary election on June 21, 2022 in Alexandria, Virginia. In two of the most competitive districts in the U.S., Virginians will be choosing Republican nominees to take on Democratic incumbents Rep. Elaine Luria (D-VA) and Rep. Abigail Spanberger (D-VA). (Photo by Alex Wong/Getty Images) Photo credit (Photo by Alex Wong/Getty Images)
By Lauren Barry, KCBS

SAN FRANCISCO (KCBS RADIO) – While the U.S. Supreme Court’s decision last Friday to overturn Roe v. Wade and upend abortion protections in the nation is a blow for the left, some hope it will inspire people to vote this November.

According to CBS News poll results released this week, the Dobbs v. Jackson Women’s Health opinion might trigger a “blue wave,” in an election season that appears to favor Republicans thus far. Last month, just 40% of Democrats said the decision regarding Roe would get them to vote. This month, it is up to 50%, said CBS.

As of this week, 58% of Americans believe that legislation should be passed to codify Roe’s protections as law, the poll found. Lawmakers attempted this after a draft of the Supreme Court opinion leaked in May, but they were not able to get enough votes to pass it.

CBS poll results also found that most Americans believe overturning Roe was a step backward for the nation and women believe by three to one that the decision will make their lives worse. Those who are opposed to the ruling are also concerned about the court overturning other opinions that protect same sex marriages and contraception.

Justice Clarence Thomas even said he thinks the court should look into those decisions in his own take on the majority opinion penned by Justice Samuel Alito.

It is not clear if Democratic inclination to vote tied to the Roe decision will carry until the midterms, which are still months away.

Even as most Americans disapprove of the court’s decision, Reuters/Ipsos poll results updated Tuesday indicated that voters are most concerned about the economy as the U.S. deals with the highest inflation rates in 40 years. A list of issues provided by those pollsters did not include abortion.

Democrat President Joe Biden’s approval rating has remained low for months as COVID-19 related issues and inflation continue. Reuters/Ipsos findings said that even Democratic support for the president has lowered.

Five Thirty Eight explained that the president’s party historically does poorly in the midterms, a trend any potential “blue wave” would need to sweep away this November. Recent data from the outlet found slightly more support for Republicans using a generic Congressional ballot.

As of June 21, Democrats had a slim majority in the House of Representatives and an even slimmer majority in the Senate. Despite the shaky outlook for the party, CNN also reported this week that “in 2022, the political geography is decidedly blue.”