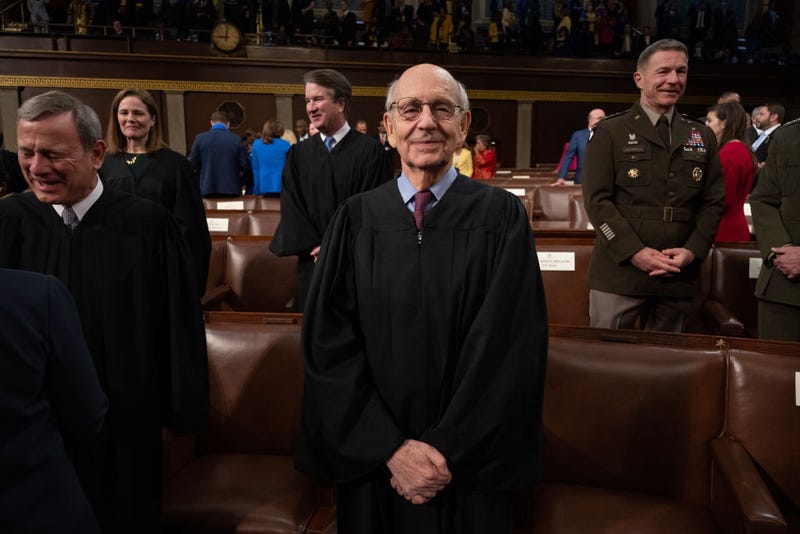 His successor, President Joe Biden's pick, the Honorable Ketanji Brown Jackson, will be sworn in as the 104th Associate Justice of the Supreme Court at noon on Thursday, according to a release issued by the Supreme Court’s press office.

While his retirement is not a surprise, as the San Francisco native made his intentions known at the beginning of this year, the announcement comes as the Supreme Court has made a series of controversial decisions in recent days, including the overturning of Roe v. Wade.

Breyer is one of three liberals on the nine-person court, and it is expected that Jackson will continue to vote in the same vein.

Her addition will not change the ideological balance too much, "but she's slightly, probably even more liberal than Justice Breyer," said Rory Little, a professor at UC Hastings College of the Law and former Supreme Court clerk, on KCBS Radio on Thursday

"It is a very historic day," he said. "She will add another Black voice to the Supreme Court."

"She also adds a fourth woman to the court," he said. "Not quite a majority, but getting close to even-handed."

The letter announcing Breyer's retirement was sent to President Biden on Wednesday, saying that “It has been my great honor to participate as a judge in the effort to maintain our Constitution and the Rule of Law.”

Breyer has served on the court for nearly three decades, starting his term in in 1994, picked by then President Bill Clinton.

He then attended Stanford University for his A.B. and got his law degree at Harvard University.

At the start of his career, he spent time clerking for Supreme Court Justice Arthur Goldberg as well as serving as a Justice Department attorney before teaching law at Harvard University, the paper reported.

Both him and his brother Charles, also with a long legal career and was appointed by Clinton in 1997 to the U.S. District Court in San Francisco, served in 1973 on the Justice Department Watergate investigation, the paper reported.

Breyer has spent the majority of his stint on the Supreme Court supporting liberal issues, including abortion rights and the Affordable Care Act.

Jackson's swearing-in will be conducted by Chief Justice John Roberts and Breyer will administer the judicial oath in a ceremony at the court with some of her family present, according to the press office.

"There's an old adage that every new justice, no matter who they are, changes the perspective of the court in ways that we can't predict," said Little.

The court handed down its final opinions for this term before the ceremony.