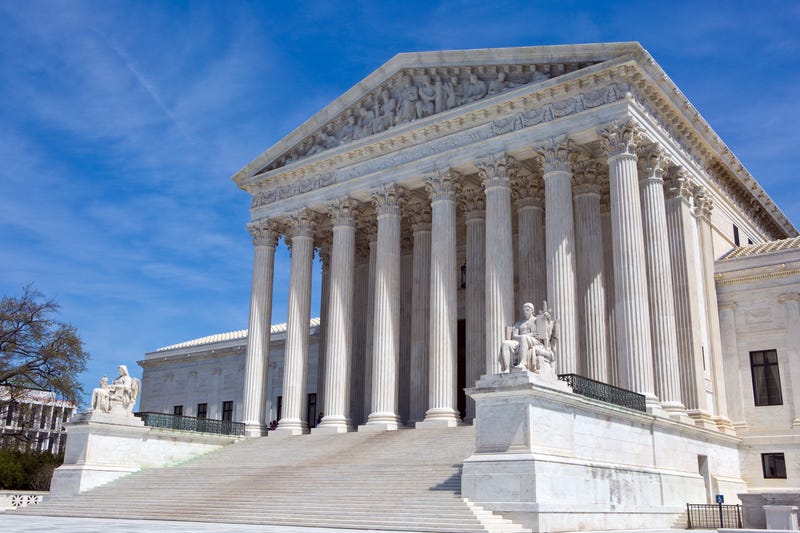 NEW YORK (1010 WINS/WCBS 880) -- The U.S. Supreme Court struck down New York state’s 100-year-old concealed gun law in a major expansion of gun rights that will make it easier for Americans to carry handguns outside their homes.

The court announced the ruling Thursday. It's the high court's first major gun decision in more than a decade.

In their 6-3 decision, the justices struck down a New York law requiring people to demonstrate a particular need for carrying a gun in order to get a license to carry one in public. The justices said the requirement violates the Second Amendment right to “keep and bear arms.” New Jersey, Massachusetts and a handful of other states have similar laws.

Justice Clarence Thomas wrote for the majority that the Constitution protects "an individual’s right to carry a handgun for self-defense outside the home.”

In a dissent joined by his liberal colleagues, Justice Stephen Breyer focused on the toll taken by gun violence. “Since the start of this year alone (2022), there have already been 277 reported mass shootings—an average of more than one per day,“ Breyer wrote.

The justices’ decision is expected to ultimately allow more people to legally carry guns on the streets of the nation’s largest cities, including New York City.

Mayor Eric Adams had said he worried the law being struck down would lead to even more guns and more crimes in the city. “It does keep me up at night,” the mayor told 1010 WINS before the ruling. The mayor scheduled a press conference for 12 p.m. Thursday after the ruling came down.

Gov. Kathy Hochul immediately reacted, calling it “frightful in its scope.” She said she’s “prepared to call the legislature back into session to deal with this.”

The governor said her office is working on legislation in response to the ruling that would focus on restricting guns in “sensitive locations.”

It is outrageous that at a moment of national reckoning on gun violence, the Supreme Court has recklessly struck down a New York law that limits those who can carry concealed weapons.

“The language we’re reading is shocking,” Hochul said of the court's decision. “Today the Supreme Court is setting us backwards in our effort to protect families and stop gun violence.”

“This could place millions of New Yorkers in harm’s way,” the governor added, saying she doesn’t want people entering places like subways and movie theaters with concealed weapons.

“This decision isn’t just reckless it’s reprehensible. It’s not what New Yorkers want. And we should have the right of determination of what we want to do in terms of our gun laws in our state,” Hochul said, denouncing “the gun culture that has now possessed everyone up to the Supreme Court.”

The governor said her office is working on legislation in response to the ruling that would focus on restricting guns in “sensitive locations.”

Backers of New York’s law had argued that striking it down would ultimately lead to more guns on the streets and higher rates of violent crime. The decision comes at a time when gun violence already on the rise during the coronavirus pandemic has spiked anew.

In most of the country gun owners have little difficulty legally carrying their weapons in public. But that had been harder to do in New York and several other states. New York’s law, which has been in place since 1913, states that to carry a concealed handgun in public, a person applying for a license has to show “proper cause,” a specific need to carry the weapon.