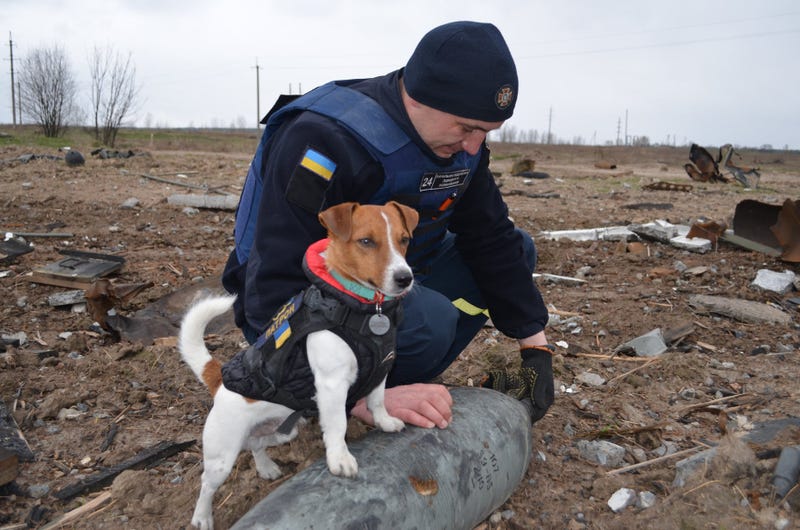 A tiny dog has become one of the biggest heroes to come out of the war in Ukraine.

A 2-year-old Jack Russell Terrier named Patron is working with the Ukrainian State Emergency Service in the northern city of Chernihiv, where he sniffs out undetonated landmines left behind by Russians, NPR reported.

Patron -- which means "bullet," "cartridge" or "ammo" in Ukrainian -- is a pro at what he does, too. Early reports said Patron had found 90 explosive devices, but his latest tally is now past 150.

The Ministry of Foreign Affairs in Ukraine recently boasted about the pup's accomplishments on Twitter.

A dog called Patron, who works with SES rescuers in Chernihiv, has helped defuse nearly 90 explosive devices since the beginning of the full-scale invasion 🐶 One day, Patron's story will be turned into a film, but for now, he is faithfully performing his professional duties. pic.twitter.com/2PpT8p4Yfr

In March, Ukraine’s Center for Strategic Communications and Information Security shared a video of Patron in action. Since then, the pooch has become a star online and amassed thousands of followers on Instagram.

"One day, Patron's story will be turned into a film, but for now, he is faithfully performing his professional duties," the center wrote.

In addition to his bomb-defusing duties, Patron is also known for comforting other emergency service workers who might be having a bad day. He also brings smiles and joy to locals he meets while on duty. The State Emergency Service said the "pyrotechnic dog' is loved by both adults and children.

While Patron is saving lives, he's also warming the hearts of people across the world. Earlier this month, the State Emergency Service shared an album on Facebook filled with artwork of Patron submitted by fans.

"Our brave baby Patron has inspired an incredible number of gifted artists and we are incredibly happy for that. It motivates not to give up no matter how hard it is, to keep the bar high and to fight with new strength, knowing how many people are still waiting for help and how many people believe in us," the agency wrote. "Our Patron doesn't let his feet down either and sends his gratitude to everyone."

US urges more arms for Ukraine amid fears of expanding war