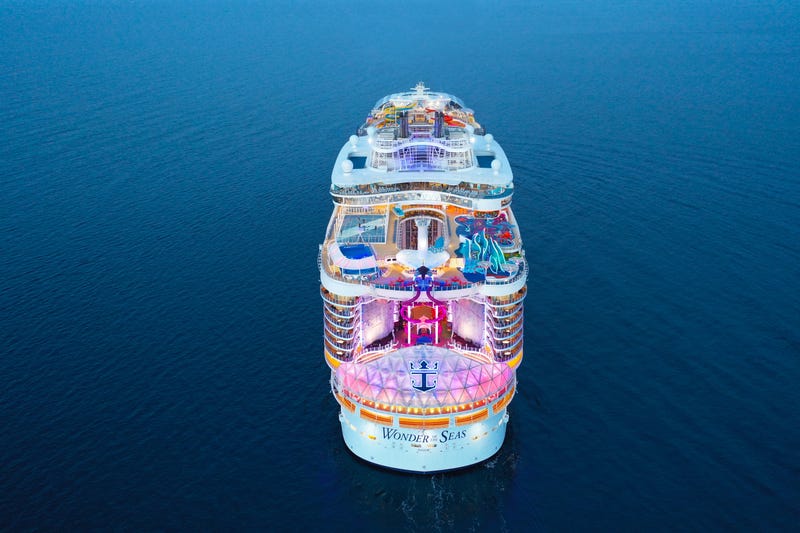 Feb. 21, 2022 – Royal Caribbean International’s Wonder of the Seas arrived in the U.S. for the first time. The new ship will debut on March 4 in Fort Lauderdale’s Port Everglades in Florida and set sail to the Caribbean and the cruise line’s private island destination, Perfect Day at CocoCay in The Bahamas. Photo credit Photo courtesy of Royal Caribbean.
By Joe Hiti, Audacy

The world’s biggest cruise ship, Wonder of the Seas, has set sail for the first time. The vessel weighs 236,857 tons and has 19 swimming pools, 20 restaurants, 11 bars, an ice rink, a casino, and its own central Park.

The cruise ship is a part of the Royal Caribbean liner and took off from Fort Lauderdale, Florida, on Friday for its seven-day maiden voyage. The ship will explore the Caribbean.

Goodbye old, hello bold. 🤩 #WonderoftheSeas is sailing off on her maiden voyage to the Caribbean — and we’re giving you the first looks at the world’s biggest ship day-by-day, all week long. pic.twitter.com/cLDe7lLCGM

The onboard casino is Las Vegas-themed, its Central Park has 20,000 plants and trees, and there is even a Coney Island-themed boardwalk with games and hotdogs.

Wonder of the Seas is five times the size of the Titanic with 18 decks, 16 for passengers, and is 362 meters long, with the capabilities of carrying 6,988 cruise-goers and 2,300 crew, according to Royal Caribbean.

It can also reportedly hold enough beer to fill all 19 swimming pools onboard twice.

The vessel is fast for a cruise ship as well, going at a top speed of 22 knots or 25 miles per hour. The average cruise ship goes at a speed of 18 to 20 knots, according to Royal Caribbean.

Wonder of the Seas was built in Saint-Nazaire, France, and took three years and £1billion.

Plans to launch the record-breaking ship in China were set for last year, however, they were delayed due to COVID-19.

Other things passengers can do aboard the vessel include breaking a sweat at the gym, playing around on the ship’s mini-golf course, battling it out in laser tag and the video game arcade, or relaxing and taking it easy at the outdoor movie theater and luxury spa. 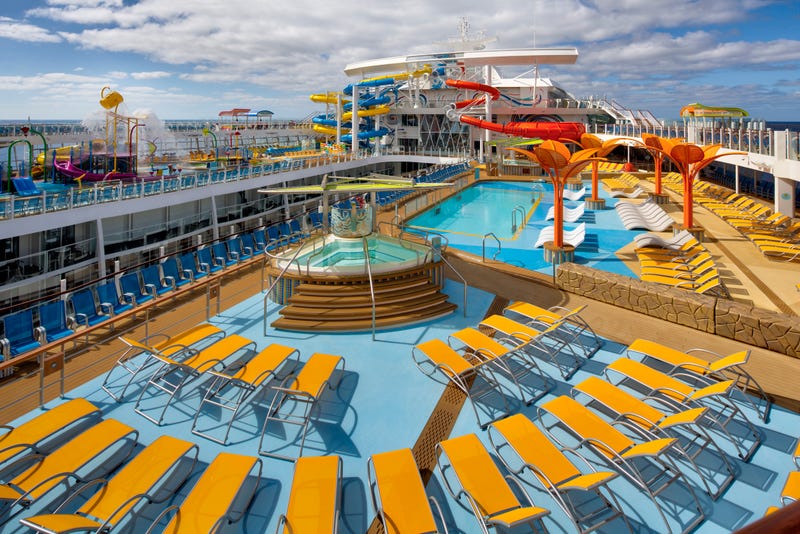 A vibrant pool deck with Caribbean vibes, live music and more is on deck aboard Wonder of the Seas. From one sun-soaked destination to the next, vacationers can enjoy the new, cantilevered Vue Bar, signature bar The Lime & Coconut, The Perfect Storm high-speed waterslides, kids aqua park Splashaway Bay, casitas, the largest poolside movie screen on a Royal Caribbean ship, and more. Photo credit Photo courtesy of Royal Caribbean

Royal Caribbean chief executive Jason Liberty shared with the New York Post that bookings for the company are back to pre-pandemic levels.

“We are eager to move forward this year,” Liberty said. “We expect 2022 will be a strong year as we bring the rest of our fleet into operations and approach historical occupancy levels.”