Aaron Judge did it. On Wednesday night in Toronto, the New York Yankees slugger took Tim Mayza deep to left field on a 3-2 pitch in the seventh inning to tie Roger Maris with 61 home runs in a season.

The anticipation was building for Judge, who hit three home runs in two games early last week to get to 60 on the year. Then it was a waiting game for Judge and the baseball world.

But that wait should remind everyone just how special a feat this is for the Yankees outfielder.

Keith McPherson and Sweeny Murti of the Audacy Original Podcast “BXB” talked about Judge’s historic home run and how the week-long wait only makes it that much better.

“We knew it was going to happen, we didn’t know exactly when it was going to happen. I kind of like now that there was a little bit of a wait, some added suspense,” McPherson said (0:17 in player above). “You had the live look-ins all week. You had everybody talking about who’s going to get the call, would it be on Apple TV, would it be on FOX, ESPN, and it happens on YES Network. John Sterling and Michael Kay get the call. And it happens in a way that is exactly Aaron Judge.”

After the Blue Jays scored three runs to tie the game in the bottom of the sixth, Judge put the team on his back – as he’s done many times this season – and gave the Yankees a 5-3 lead with one swing of the bat.

The wait was more than worth it for Judge and the Yankees.

“I’m glad you brought that up,” Murti said. “It was really kind of fun to watch him wait a week for it, because it reminds you, as we’ve been reminded a few times, how hard it is to do this, right? This isn’t easy. If it was easy, it wouldn’t be that special. The fact that he went through this, you could see some of the emotion, you could see his family’s emotion, his teammates. And remembering that he just missed this one because he flew out to the warning track. Or he fouled that one back to the screen. Or he was being walked because they weren’t pitches he could take out of the park. It reminds you how hard it is, and that tells you how special it is.”

Judge had 31 plate appearances in the seven games between hitting 60 and 61. He was walked in over a third (12) of those appearances while going 5-for-19 with three doubles when he was pitched to.

The Yankees return home to host the Orioles this weekend in their final regular-season series at Yankee Stadium this year. Judge has seven games left this season to get home run number 62. 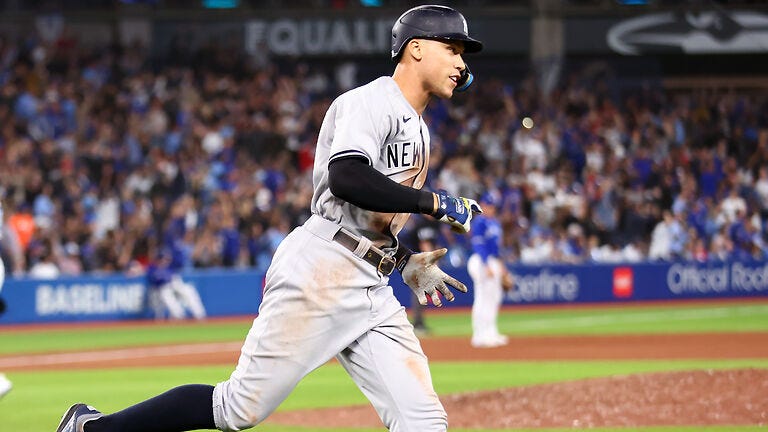 Should Aaron Judge be viewed as true record-holder? Twitter debates