The MLB lockout resulted in a little bit of chaos this March, with free agency opening around the same time as camps. Guys were departing spring training sites as quickly as they arrived as trades went down, and the Atlanta Braves were at the center of it all.

But Michael Harris, who at that point hadn't played a big league game, got assurances that he was staying put.

The first couple weeks of camp were mayhem for the Braves. Freddie Freeman was unsigned, and before he figured out where he was headed Atlanta sent a bunch of prospects to the Oakland Athletics for Matt Olson.

So, Olson suddenly arrives and Freeman is gone, as are prospects who already had reported to Florida.

Braves general manager Alex Anthopoulos told “The Steakhouse” on 92.9 The Game that there are only two players in his time with the organization who were untouchable as prospects: Ronald Acuña Jr. and Harris. Knowing that Harris wasn’t going to be moved, Anthopoulos decided to put his mind at ease.

“I just got the sense (after the Olson deal) that people were like ‘Whoa, what just went on here?’” Anthopoulos said. “It’s the middle of spring, guys are there and so on, and I remember seeing Mike Harris. And I remember telling him 'I am not trading you, you are not going anywhere, you are going to be here for a long time.' And he didn’t say much, he doesn’t say much when you talk to him, and he kind of gave me a blank stare. But I wanted him to know that you’re a part of this and we really believe in you.

Harris, who is only 21 and went to Stockbridge High School in Georgia, has responded by putting together a solid rookie year, which led to his recently-signed eight-year contract extension. He’s hitting .288 this season with 12 homers, 39 RBIs and a .825 OPS across 72 games.

The only way things can get better for him is if he can help get the ice cream machine back into the Braves clubhouse Thursday night. 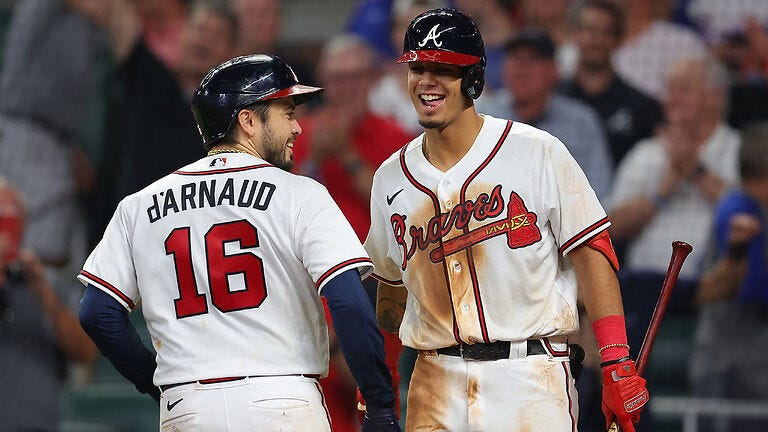 Braves' clubhouse ice cream machine will return if they win series vs. Mets