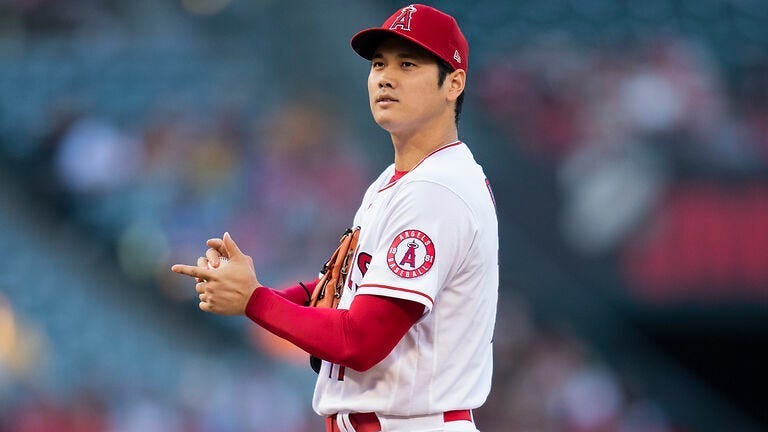 While Shohei Ohtani has not done anything publicly to suggest he wants to leave the Los Angeles Angels, their inability to get the train on the tracks might ultimately force him to look elsewhere.

Ohtani went through quite the courtship process when he decided to pursue an opportunity in MLB, and for myriad factors landed with the Angels. While he since has held up on his end of the bargain, the team around him hasn’t. With Ohtani set to become a free agent following next season, it has led to speculation that maybe he will look elsewhere.

For now, that’s more a debate topic than something with serious legs, but it would be silly to dismiss the possibility that he goes elsewhere. Appearing on the “Baseball Tonight” podcast, Jeff Fletcher, the author of a forthcoming book "Sho-time: The Inside Story of Shohei Ohtani and the Greatest Baseball Season Ever Player", offered his take on the possibility.

“I think it’s perfectly reasonable to be skeptical,” Fletcher said. “Certainly, the Angels have not won lately. Everybody says winning is the most important thing, every player says they want to go to a winning team. That being said, not every free agent signs with the Yankees or Dodgers. There are other things that count for players, there’s how much money you get and there's how comfortable you are with the people around you and where you live.

“I think the Angels certainly have a chance to win on both of those accounts. They’ve got lots of money, he’s got a nice place, he’s got a pretty nice deal with the media where we don’t really bother him, which if he goes to play for the Yankees I don’t know if that’s going to be a case. So, I think there are a lot of reasons for him to like the Angels, and if they write him a huge check I would not be shocked if he does stay.

“But also, it is realistic to say that the Angels haven’t won and he wants to win, so he might just go elsewhere too. The short answer to that is I don’t know what’s going to happen, I would not be surprised either way if he stays or goes.”

The Angels would be wise to talk extension with Ohtani this offseason, and that will quickly become one of the biggest storylines.

If Ohtani agrees to an extension, then it puts the matter to bed. But if he decides he wants to test the market and hit free agency, then the Angels might have to at least consider the possibility of trading him as opposed to losing him for nothing.

That would set up a sweepstakes the likes of which have never been seen in MLB, but that also would be a nuclear option for the Angels.

“I don’t think the Angels, as long as they have Mike Trout, are in any position to look long-term anything. Even at the risk of keeping (Ohtani) through ‘23 and just losing him, I think they would pick that as opposed to just taking a year off and not even trying to do, which is what I think they would do if they traded Ohtani.”

Between Ohtani and Trout, the Angels have the best two players in baseball. The fact that a formidable enough team has yet to be built around them makes it impossible to fault either player for pursuing other options if things don’t change quickly.