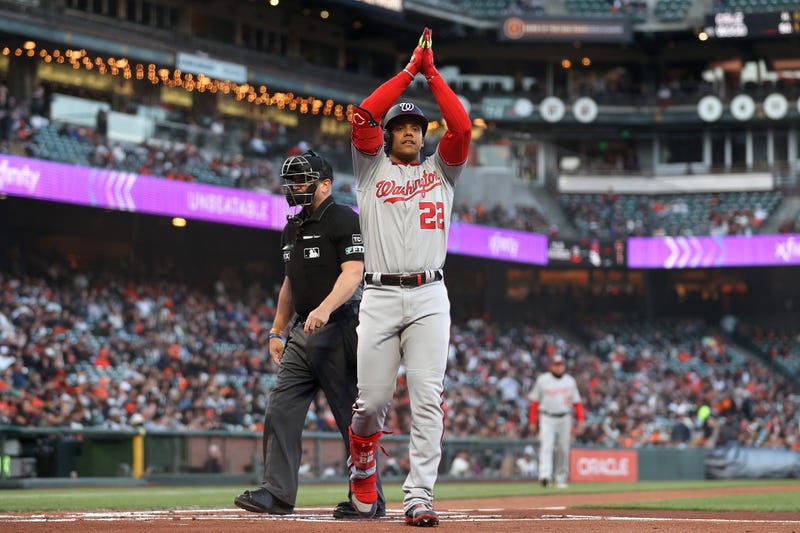 Juan Soto is one of the biggest stars in baseball and he’ll be due for a big payday soon. He is a free agent in 2025 and may or may not have received a 13-year, $425 million contract extension offer recently.

If Soto does hit free agency, or if he’s on the trade market before 2025, there are sure to be teams checking in on him. One of those teams could very well be the San Francisco Giants.

Mark Willard and Joe Shasky discussed Soto and the possibility of the Giants landing him on the latest episode of Garlic Fries and Baseball Guys.

“I think the Giants would show up with a blank check if they had an opportunity to acquire Juan Soto. I think he’s precisely the guy that Farhan Zaidi would pay,” Willard said (1:40 in player above).

Soto hit a career-high 34 home runs and won the World Series with the Nationals in 2019. However, he’s since watched Washington trade away its best players, including Trea Turner and Max Scherzer last year.

“Are you willing to say ‘I want to be with the Nationals for life’ when every really good star who’s been around you in your career got sent out? … If I’m Juan right now, I’m looking at the Mets and I’m looking at the Braves. And I’m wondering if I’m signing up for 13 years of losing.”

“If you’re Fahran Zaidi, you gotta – and I believe that he will – he knows that you gotta go get a star,” Willard said.

Willard has seen fanbases simply want any star that becomes available, mentioning the Los Angeles Lakers and Brooklyn Nets in particular. The Giants can’t fall into that trap.

“It’s gotta be the guy that’s at the right age, right contract, and then I firmly believe the Giants will spend,” he continued.

“Juan Soto is totally that guy, don’t know if he’s available, but somebody will be. I just want to caution everyone though, it should not just be ‘get me anyone you’ve heard of for the sake of him being a star.’”