CeeDee Lamb has been moving up the Dallas Cowboys’ depth chart since being drafted 17th overall in 2020. Entering his third season, Lamb is expected to be Dallas’ go-to wide receiver after the trade of Amari Cooper.

Lamb has shown signs of greatness throughout his young NFL career. He’s caught 153 of 231 targets for 2,037 yards and 11 touchdowns in his first two seasons. And he’s only just beginning.

Matt Harmon and James Koh of Audacy’s “Reception Perception: The Show” podcast talked about Lamb’s potential for both the Cowboys and fantasy football managers.

Koh explained that, generally speaking -- basically anyone except Cooper Kupp -- you need to be an outside X receiver to be a top-10 or top-five wideout in fantasy football.

“That’s a role that CeeDee Lamb played but not very often,” he said of last year’s usage. “He was used primarily out of the slot as guys like Amari Cooper and Michael Gallup were running around on the outsides. I tell you what, when either one of those guys got hurt and CeeDee Lamb got to play on the outside, that’s when you saw the lid get taken off of his potential.”

With Cooper gone, the 22-year old Lamb has room to grow even more.

“I agree with you. I think CeeDee Lamb has been all offseason a great darkhorse bet to lead the NFL in targets, lead the NFL in catches, lead the NFL in receiving yards, because the opportunity in this offense is just enormous,” Harmon said. “It’s CeeDee Lamb, Dalton Schultz, rookie Jalen Tolbert -- who I actually kind of like. And their receiver depth chart is like James Washington gets hurt and they’re like ‘Oh no,’” he laughed. “Which is not good. James Washington is not good. That’s a tough spot to be in.”

Dallas has one of the fastest offenses in the league in terms of both plays ran and pass attempts. That can only help Lamb.

“CeeDee Lamb doesn’t even have to have a Cooper Kupp type of 30% target share ceiling to walk into 170 targets. He can be at like 26, even 24 he can have a massive return on that,” Harmon said. “And I think there's a chance, given the guys around him, he walks into 30%.

Harmon agrees that the Cowboys need to decide what they want Lamb to be. They can’t keep moving him around depending on what other receivers are available.

“I think what they’ll probably end up doing is taking that old Amari Cooper spot as a flanker and outside in 11 personnel, three-receiver sets,” Harmon continued. “He’ll probably move into the slot a decent bit which is fine. If he’s a 50-50 guy I’m totally cool with that because I think he’s a huge upgrade on Amari Cooper. I think he’s a way better player.”

Given the Cowboys’ wide receiver depth, or lack thereof, Lamb should almost never leave the field. Whether he’s lined up outside or in the slot, he can be used as a weapon.

“It’s all there. This guy can play, “Doh said. “He needs to get volume and, by the way, half of the volume metric is air yards. You talk about total targets, pass attempts. Yeah, definitely it’s there for Dallas, but also top-five last year in terms of total air yards and CeeDee Lamb, if he’s going to take home a bunch of that -- which, by the way, he should -- man, that is really, really interesting.” 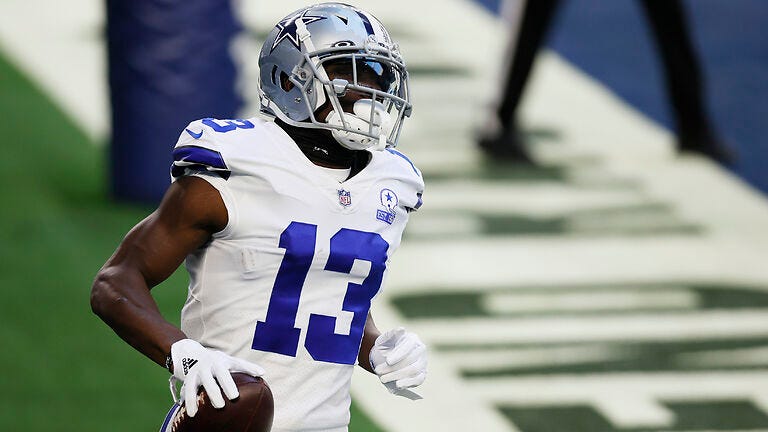 Jerry Jones: If Week 1 was the Super Bowl, Michael Gallup would be playing