Ahead of the 2022 Major League Baseball season, Audacy Sports has ranked the uniforms of each team from worst to best. While only one uniform is pictured for each team, the home, away and primary alternate looks of all 30 franchises were considered. 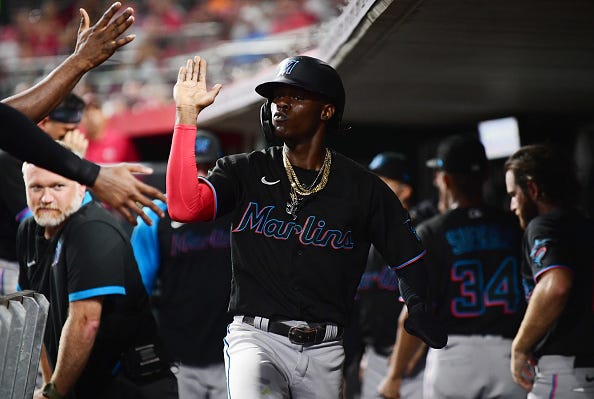 While many are partial to the original teal and black look that the Marlins sported various variations of between 1993 and 2011, we actually thought that the uniforms that the team wore from 2012 to 2018 -- we'll call it the Giancarlo Stanton era -- was much better than what they wear currently. The team's alternate black tops (pictured above) are especially rough, because if you're standing on the other side of the field, it's a struggle to even read a player's name on the back on their jersey.

Here’s what we think the Cleveland Guardians uniforms will look like!

What do you guys think? pic.twitter.com/WlxFk76vBI

It's good that Cleveland ditched their previous name, but they missed a chance to altogether refresh a stale look. Instead, they changed their name and put that on uniforms that look barely changed from 2021, other than the fact that it now says "Guardians" across the front. Not picking the Spiders to be their next name is the biggest missed opportunity since Cleveland blew a 3-1 lead in the 2016 World Series. 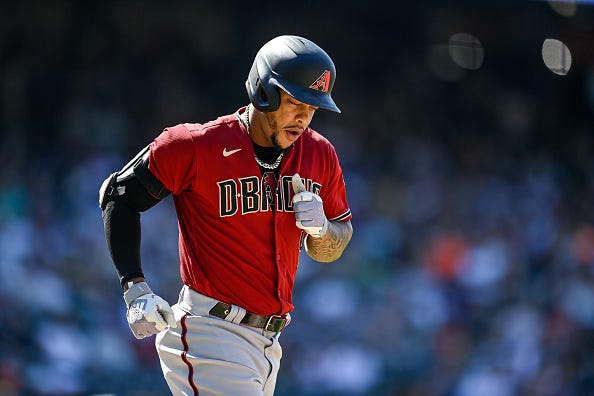 Quite simply, most people aren't going to be happy until the Diamondbacks return to wearing purple and teal uniforms. Additionally, "Diamondbacks" written out on a uniform looks much better than "DBacks". It's hard to understate how much of an upgrade a return to the Randy Johnson/Curt Schilling/Luis Gonzalez era color scheme on a permanent basis would be. 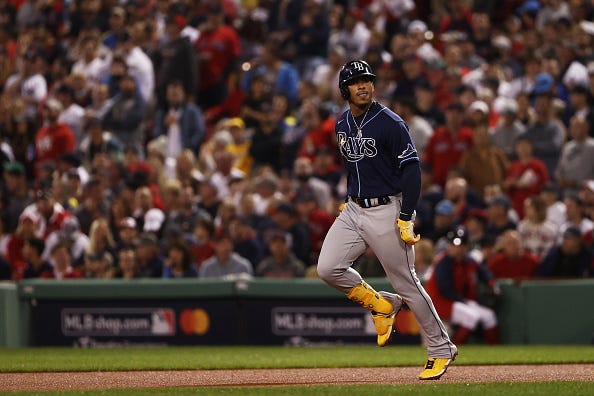 While the Rays have had tremendous success as a team since removing "Devil" from their name in 2008, their current look is very uninspiring. The sting ray should be a more prominent part of their look again, and black tops and caps look much better than navy and powder blue for the artists formerly known as the Devil Rays. 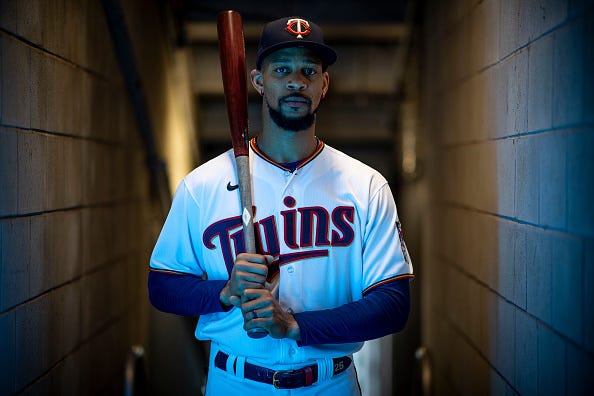 Outside of their alternate red tops, we don't dislike the Twins' current look. The twin cities logo on their cap is one of the coolest in the league, and they thankfully ditched the "M" logo they sported on their road caps during the Johan Santana era. But the Twins feel like the Padres a few years ago -- they aren't the worst uniforms in the league, but they can do a lot better. 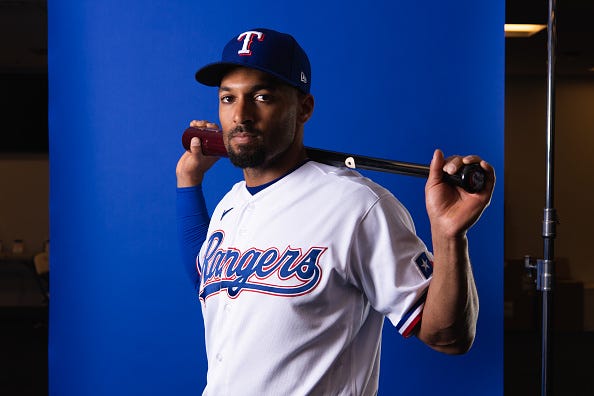 Not only did we prefer seeing the Rangers play their home games at The Ballpark in Arlington, but the uniforms that the team wore in their previous stadium were superior to what they have now. Granted, the Rangers -- as pictured above -- still normally wear the same hats that they did from 2000-2019, but they introduced a cursive script that doesn't really match with their hats in 2020. That script -- which is featured on the team's home white and powder blue alternates -- should be scrapped. 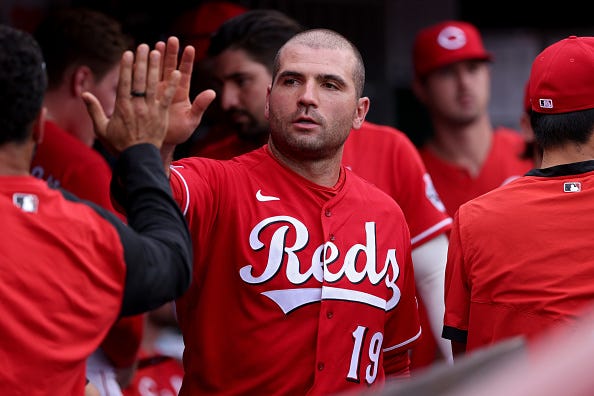 For a franchise with such a rich history, the Reds have a really uninspiring mix of uniforms. The team's home white uniforms are classic, but the rest of their repertoire is underwhelming. The team's grey road jerseys are boring, and the alternate red tops pictured above feel more like a Spring Training uniform. 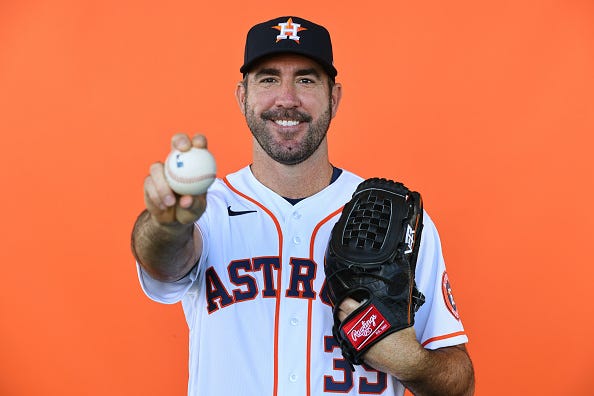 The look that the Astros took on in 2013 when they moved to the American League has a cool hat, but underwhelming uniforms. Houston's white home uniforms and gray road uniforms are fine, but we aren't particularly fond of their script. And both the orange and navy blue alternates really aren't great looks. 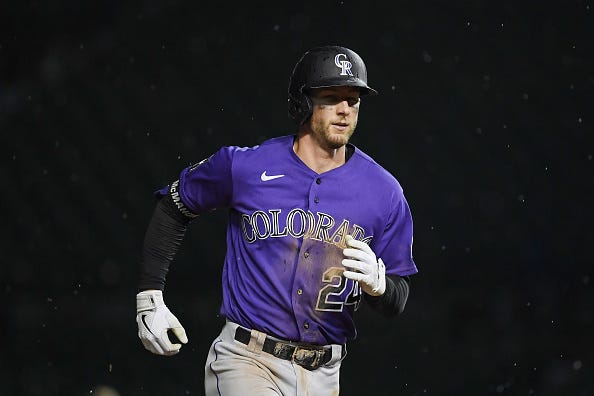 We're really torn on the Rockies' uniforms. On one hand, it's hard to believe any team still has a primary alternate with a tank top uniform, as the Rockies do with their black road jerseys. We also wouldn't be against a font change. With that said, the purple in their look -- whether it's in the white home uniforms, grey road uniforms or purple alternate tops -- really pops. It's something different and less traditional, which makes sense for a franchise that didn't begin play until 1993.

We're partial to the variations of the look that the Angels wore from 1961-1992, but there current look is definitely acceptable. While we're not normally fans of red tops, the Angels' red alternate jerseys work. Mike Trout and Shohei Ohtani are going to be cool regardless of what uniforms they are wearing. 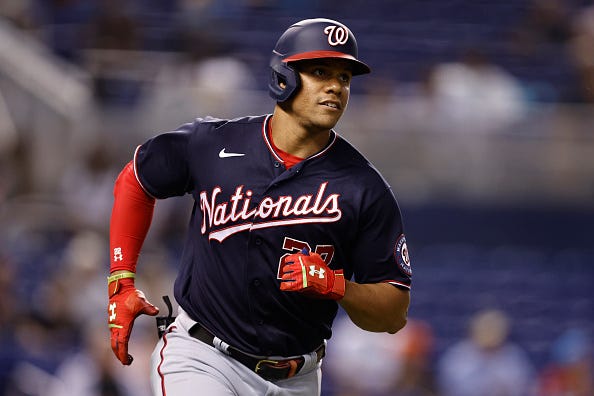 The Nationals are in a weird place because their navy blue alternate road uniforms are one of the better looks in the league, but the white home variation of the same uniform feels more like a Spring Training top. For the time being, continuing to use the uniforms pictured above as alternates to their white home uniforms and gray primary road jerseys makes sense. 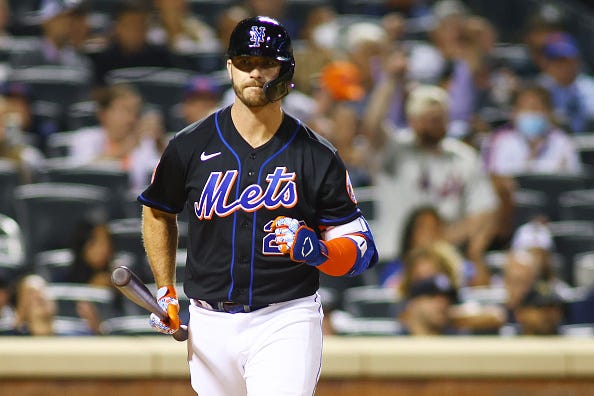 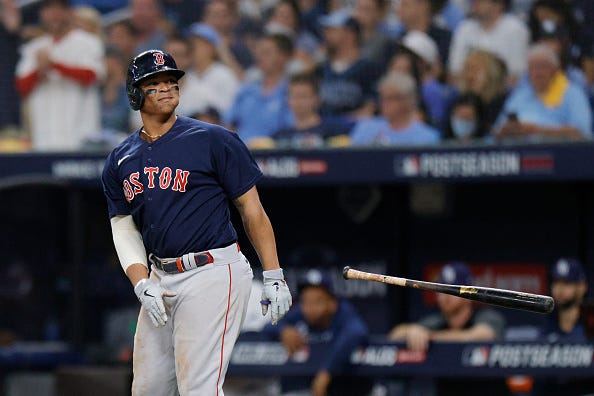 The Red Sox have very clean home and road primary looks, and we enjoy the occasional appearance of their red alternate tops. However, their navy blue alternate tops -- which look more like a t-shirt than an MLB jersey -- really drag down their uniform repertoire. 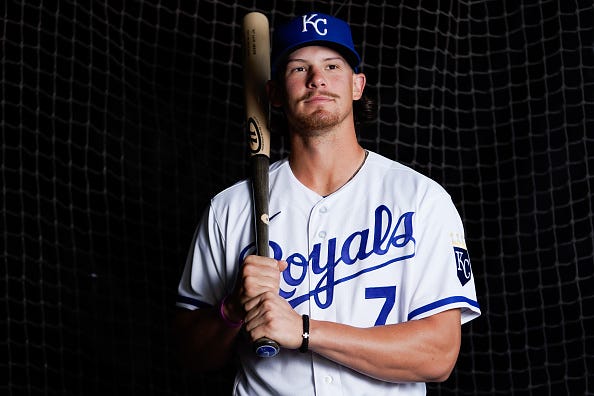 The Royals have made some tweaks to their road uniforms ahead of the 2022 season, but their white home uniforms and powder blue alternates continue to be their best looks. Now that Zack Greinke is back in Kansas City, we also wouldn't mind a return of the team's alternate black tops. 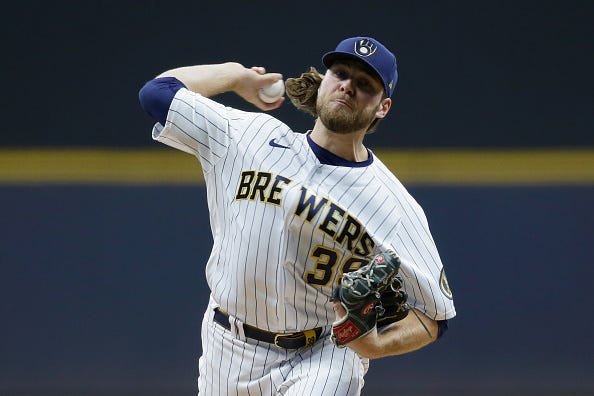 The baseball glove "MB" cap that the Brewers returned to on a full-time basis in 2020 features one of the greatest logos in sports history. While we'd prefer they use a lighter shade of blue, their current look is drastically better than what they had from 1994-2019. 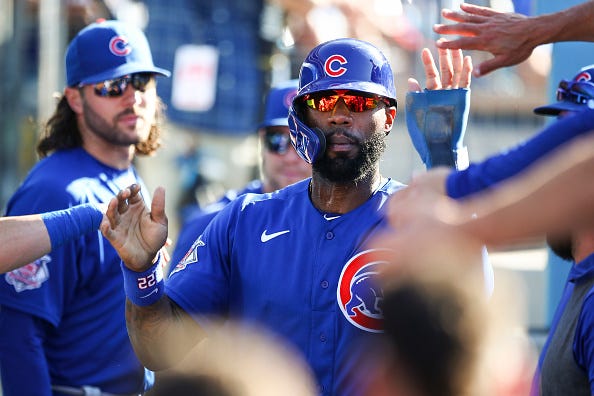 The Cubs have a classic home pinstriped uniform, and one of the few solid colored alternate tops that is really a good look. If they could improve their road gray uniforms, they'd be even higher. 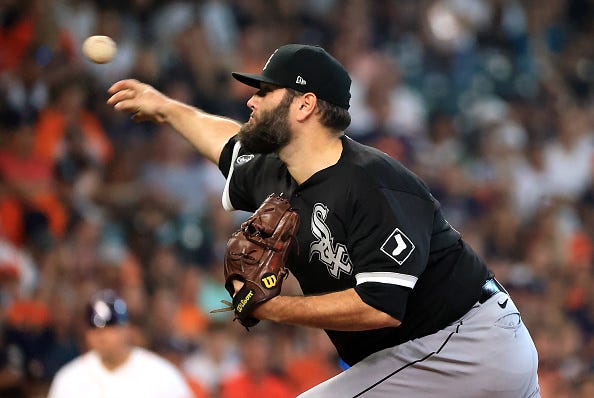 This may be controversial, but we actually think the White Sox have the best uniforms in Chicago. Their home pinstripes are solid, and their road grays are much better than the Cubs. The cherry on top is their black alternate tops, which feature a sock on the left sleeve (as pictured above) that we are particularly fond of. 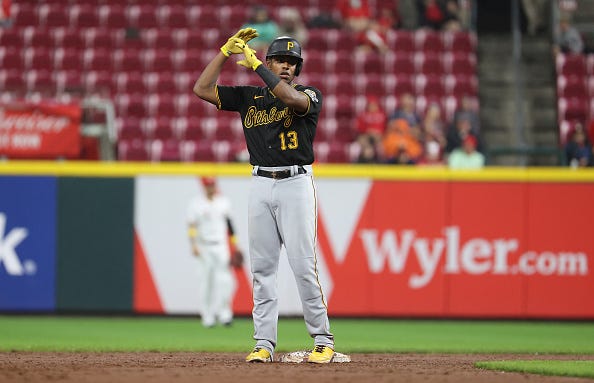 The only complaint that we have about the Pirates' look is that they don't mix in the classic "pillbox" caps more frequently. The black road alternates above are a really sharp look, and an example of a team that pulls off a cursive script very well. And it's cool that all three major professional sports teams in Pittsburgh all wear black and yellow, as Wiz Khalifa once eloquently spoke about. 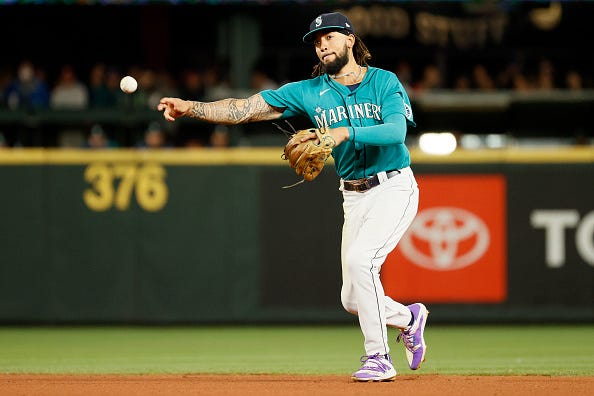 While the Mariners have solid white primary home uniforms and gray road uniforms, it's two of their alternate uniforms that really set them apart. The teal alternate pictured above is tremendous, and the same can be said for the blue and yellow Sunday home alternates. 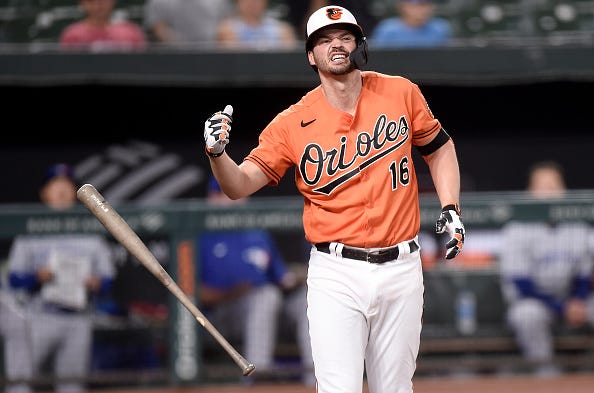 The Orioles are another team with excellent alternate uniforms, with the team's orange alternates pictured above. We're just as found as their black alternate uniforms that they pair with their "O's" hats. As they phased out the more realistic bird for the cartoon Oriole over the last decade, the Orioles have become a significantly better (and cooler) looking team. 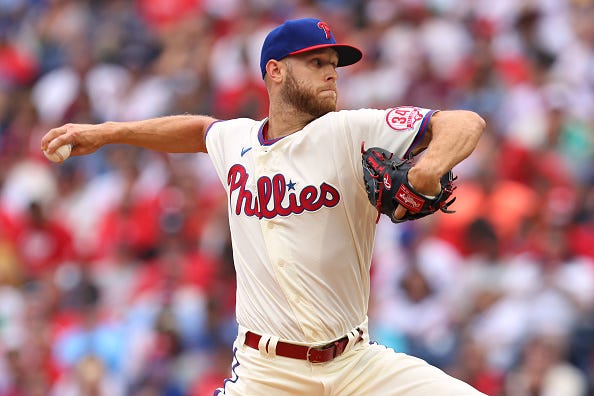 The Phillies have a top-tier powder blue throwback that they wear for Thursday home games and red pinstripes that look great as their primary home uniform. The only thing missing is a consistent road alternate to pair with their primary gray jerseys. As Phillies Nation's Destiny Lugardo noted, the gray uniforms that match the cream home day game uniforms pictured above would make the most sense. 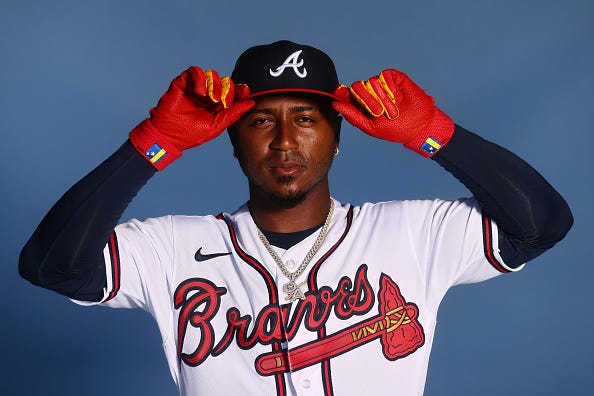 While we could do without the red tops that the Braves wear on Friday home games, their primary home and road uniforms are among the cleanest looks in the sport. And the navy blue home hats with a red brim and the cursive "A" have become classic. The Hank Aaron home and road throwbacks are both excellent as well, but the current look of the Braves is really strong. 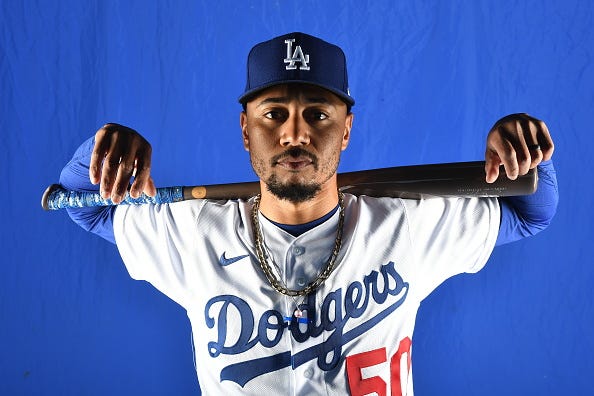 We like both versions of their gray road uniforms, but for the Dodgers, it starts and ends with their white home uniforms, which are legendary. When they played in Brooklyn, the Dodgers had pretty cool hats. But a move to Los Angeles in 1958 led to the creation of arguably the greatest hat in baseball history. 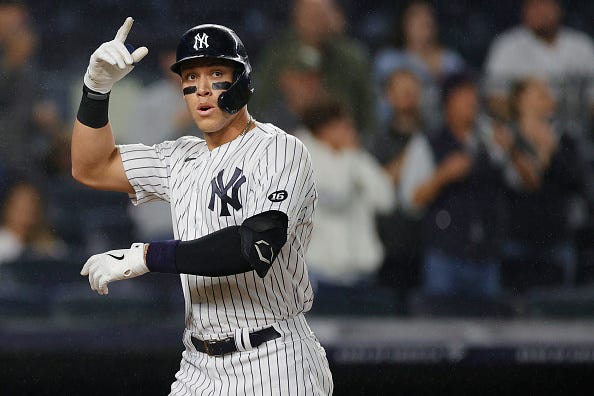 If the Dodgers don't have the most classic caps in baseball, the Yankees probably do. Their road grays are forgettable and they don't have any alternate uniforms, but the home pinstripes are arguably the most famous uniforms in sports. 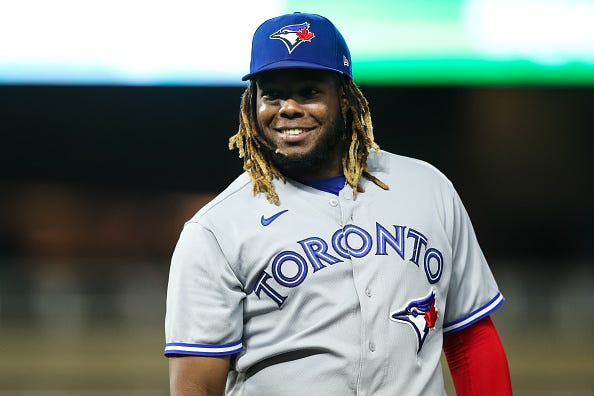 When the Expos relocated from Montreal to D.C. in 2005, we lost a great uniform set. However, Canada's lone remaining team does things extremely well. A perfect font and logo look great on their white home uniforms, alternate dark blue tops and road gray uniforms, which is enough to make you forget about the unnecessary powder blue uniforms that the Blue Jays have. 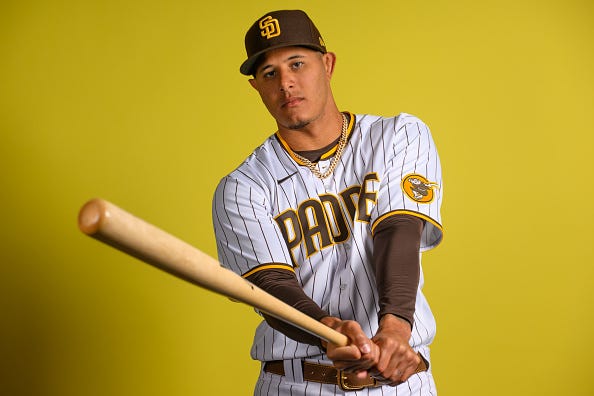 The glow-up that the Padres had in 2020 -- not just in terms of team success -- is hard to understate. For a team that had struggled to find a consistent look for much of their franchise's history, the Padres nailed their latest refresh. Both the white home pinstripes and road alternate sand brown pinstripes are pretty much perfect uniforms, and the primary road brown tops that the team wears are very popular as well. Our favorite touch on all three uniforms is the Friar logo on the left sleeve, as pictured above. 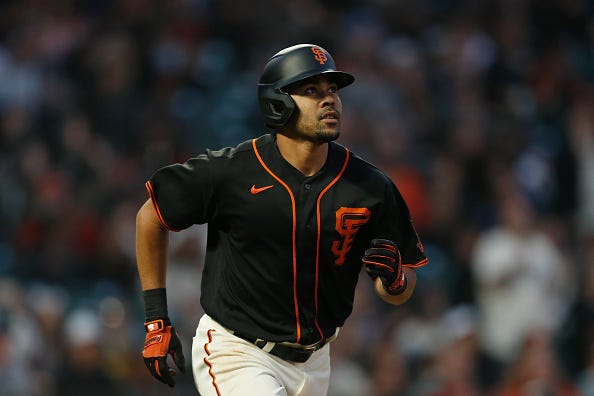 Even though their primary gray road jerseys are underwhelming, the rest of the Giants' uniform set is basically perfect. The cream home jerseys make you think of Barry Bonds hitting home runs at a ridiculous clip. And then the black alternate tops (pictured above) and orange alternate tops might both be among the five best alternate jerseys in the sport. The only request that we have is that the Giants return to not having names on the back of their home jerseys. 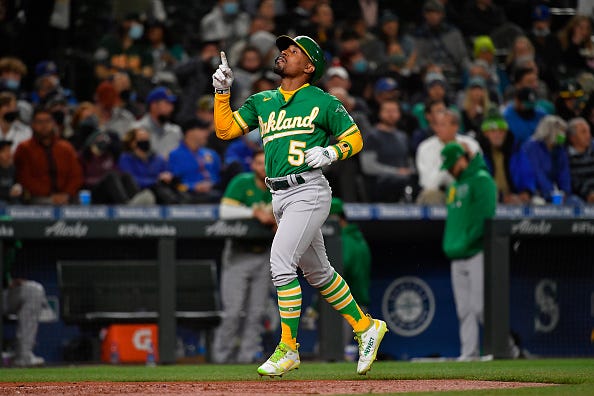 The A's have very clean looks both at home and on the road, and the Kelly green alternate uniforms pictured above are among the best jerseys that the sport has ever seen. It's unclear if the team's long-term future is in Oakland or not, but wherever they play, the A's brand should live on, with the elephant logo featured on their left sleeve. 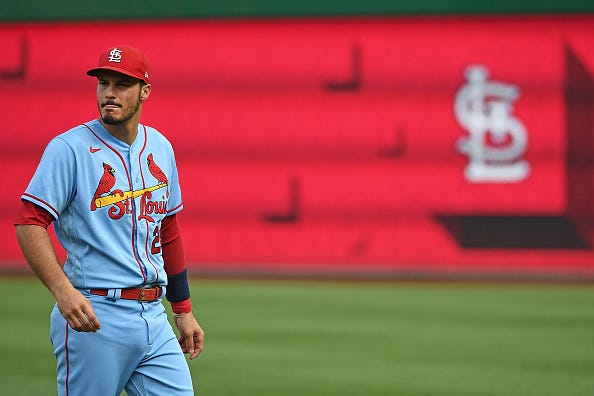 The Cardinals have a similar uniform mix as the Phillies -- white home uniforms, gray road uniforms, cream alternates and a powder blue throwback -- we just happen to like the way they've done it a bit better. The Cardinals uniforms manage to pay homage to the past without looking like throwback uniforms that should only be worn for select occasions. 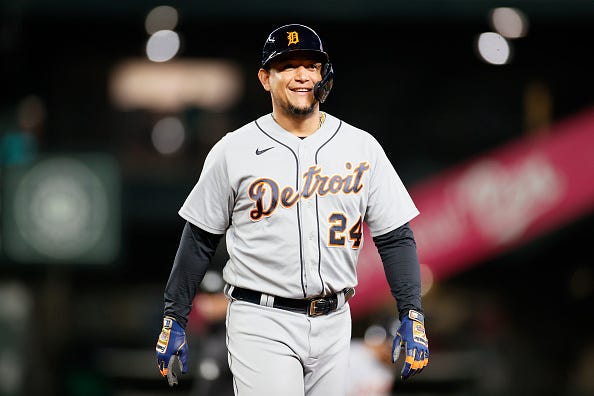 The Tigers' white home uniforms -- though they have featured some changes to the "D" logo in recent years -- are one of baseball's longest running looks, and for good reason. We're perhaps even more fond of their road gray uniforms, which they've worn since 1998. While we generally encourage teams to try out alternate looks, the Tigers have two perfect uniforms and don't need to change a thing. 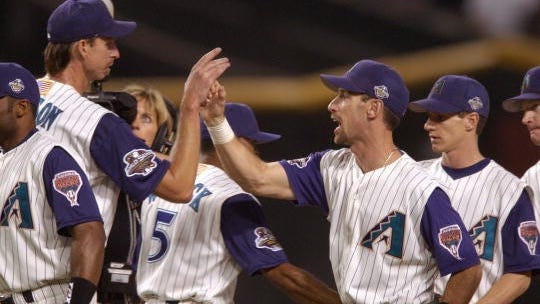