Ahead of the NLDS and ALDS, here are the latest MLB Power Rankings from Audacy Sports. 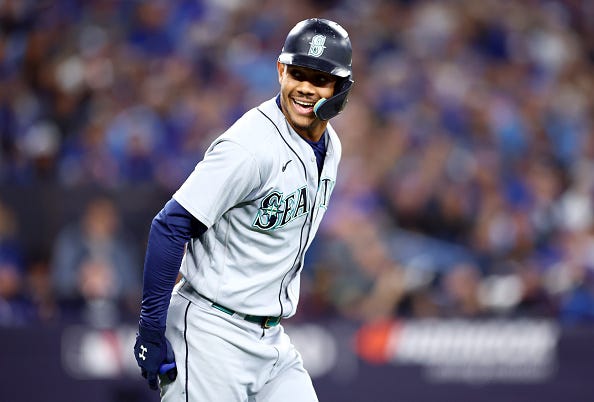 The Mariners are No. 8 in our MLB Postseason Power Rankings. Photo credit (Vaughn Ridley/Getty Images)

Someone has to be last. The Mariners are coming off of a sweep of the Toronto Blue Jays in the ALWCS, including overcoming a seven-run deficit to win Game 2. Julio Rodríguez is emerging as one of the game's biggest stars, and Luis Castillo has pitched about as well as anyone in baseball since being acquired by Seattle. We aren't going to pick the Mariners to upset the division-rival Houston Astros in the ALDS, but it certainly won't take them 21 years to return to the playoffs again. 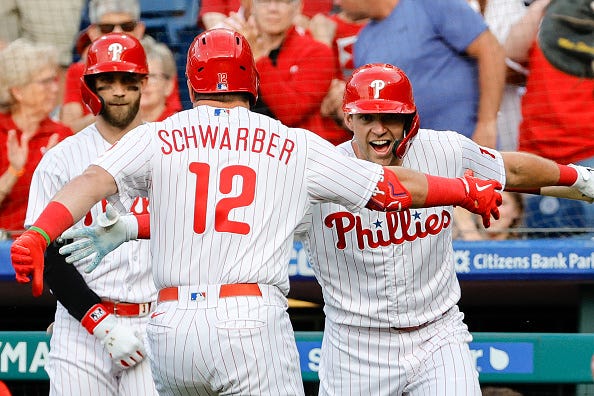 The Phillies are No. 7 in the MLB Playoff Power Rankings. Photo credit (Tim Nwachukwu/Getty Images)

It's fair to wonder if the Phillies are deep enough to compete in a seven-game series, but with the one-two punch of Zack Wheeler and Aaron Nola, they can wreak havoc in a shorter format. Some combination of Bryce Harper, Kyle Schwarber, Rhys Hoskins, J.T. Realmuto and Nick Castellanos will need to get hot for the Phillies to unseat the defending World Series Champion Atlanta Braves. But if the Phillies can steal Game 1 at Truist Park with Ranger Suárez on the mound, look out. 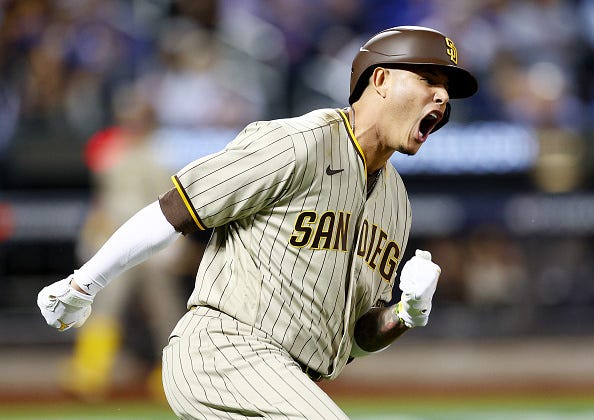 The Padres are No. 6 on our MLB playoff power rankings. Photo credit (Elsa/Getty Images)

The Padres brought one of the greatest seasons in New York Mets history to a screeching halt in the NLWCS, winning two of three games in Flushing. Trent Grisham is, all of a sudden, scorching-hot at the plate. Joe Musgrove turned in an iconic performance in the clinching game against the Mets. If Josh Hader is right, he and Robert Suárez can be a dominant one-two punch at the back-end of Bob Melvin's bullpen. Make no mistake, the Padres are heavy underdogs in the NLDS, having gone just 5-14 against the division-rival Los Angeles Dodgers during the regular season. But if former Dodger Manny Machado and 2019 World Series hero Juan Soto deliver a few clutch hits, the Padres could absolutely make this a competitive series. 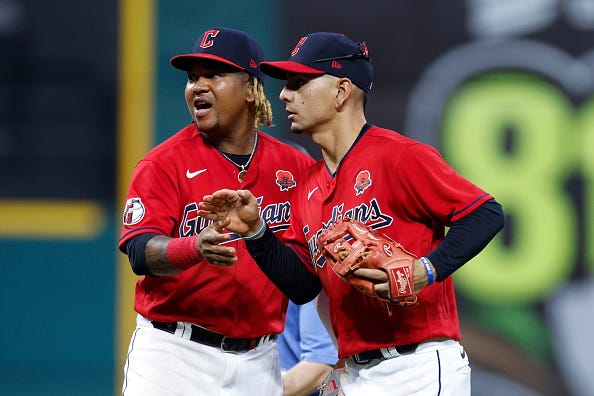 The Guardians are No. 5 on our MLB playoff power rankings. Photo credit (Ron Schwane/Getty Images)

While the Guardians certainly don't possess the type of thump in their lineup that the New York Yankees do, José Ramírez's career is on a Hall of Fame trajectory, and Andrés Giménez has turned into a star in his own right. Cleveland will send Cal Quantrill, Shane Bieber and Triston McKenzie to the mound in the first three games of their series against the Yankees, a pretty impressive trio. They also have one of the game's nastiest closers in Emmanuel Clase, who posted a minuscule 1.36 ERA in 2022, while leading baseball in saves. And among the managers whose teams are still active in the postseason, only Dave Roberts has more career postseason wins (44) than Terry Francona (42). Francona is the only skipper still in the postseason who has won multiple World Series titles. 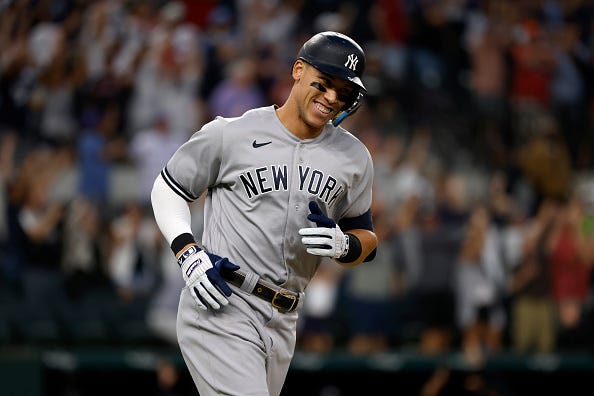 Aaron Judge and the New York Yankees are No. 4 on our MLB playoff power rankings. Photo credit (Ron Jenkins/Getty Images)

Aaron Judge is coming off of a magical season, as he set a new American League single-season record with 62 home runs, likely en route to winning the AL MVP. But of the four teams that had a first-round bye, the Yankees may be the most obvious candidates to be upset in this round. In the first half of the season, Aaron Boone's squad went 64-28, looking like the best team in the sport. But after the All-Star Break, the Yankees went 35-35. Game 1 starter Gerrit Cole had a 4.12 ERA in the second half of the season. Giancarlo Stanton had a .582 OPS after the midsummer classic. There are definitely some red flags for the Yankees. 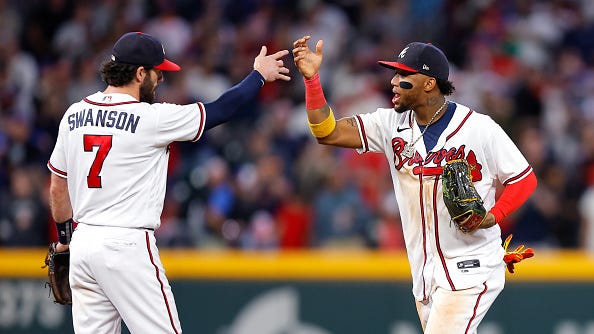 The Braves are No. 3 on our MLB playoff power rankings. Photo credit (Todd Kirkland/Getty Images)

If you're surprised to see the Braves this high, don't be. The Braves are the defending World Series Champions, and went 45-23 (.662) after the All-Star Break, en route to snatching the National League East away from the New York Mets. Ronald Acuña Jr. was inconsistent in his return from a torn right ACL, and Ozzie Albies is likely to miss the NLDS as he recovers from a broken finger. Still, the ball never seems to stop rolling in Atlanta, where Austin Riley and Danbsy Swanson both had career years, while Michael Harris II emerged as one of the best young outfielders in the sport this season. We may be headed for our third consecutive Braves-Los Angeles Dodgers NLCS. 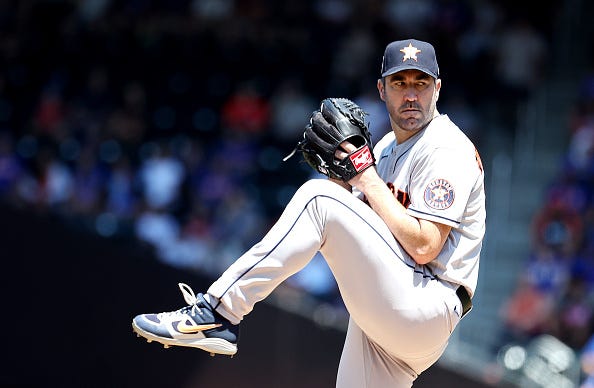 Justin Verlander and the Astros are No. 2 on our MLB playoff power rankings. Photo credit (Al Bello/Getty Images)

The Astros won an American League-best 106 games, and have quite the playoff pedigree. If the Astros defeat the Seattle Mariners, they'll reach the ALCS for a staggering sixth consecutive season. Future Hall of Famer Justin Verlander headlines a starting rotation that also includes Framber Valdez, Luis Garcia and Lance McCullers. With Jose Altuve, Alex Bregman, Michael Brantley, Yordan Alvarez and Kyle Tucker, the Astros have a lineup full of postseason experience, and also have Jeremy Pena and Trey Mancini in the fold this year. Perhaps 2022 will finally be the year that Dusty Baker gets his World Series ring. 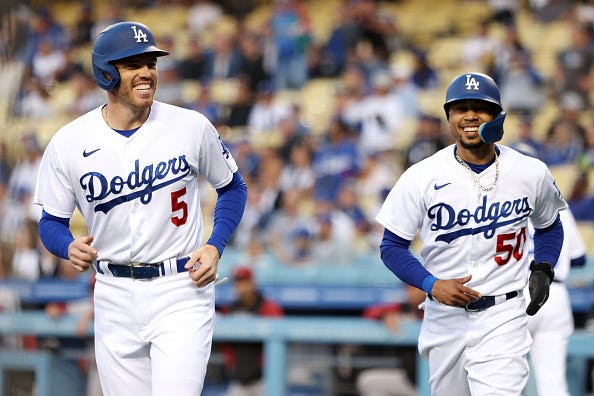 The Dodgers are No. 1 on our MLB playoff power rankings. Photo credit (Katelyn Mulcahy/Getty Images)

The Dodgers have become such a staple of October baseball that it feels like hardly anyone took notice of them winning 111 regular season games. With Mookie Betts, Freddie Freeman, Trea Turner and Will Smith, the Dodgers almost certainly have the best lineup among the teams still alive. Obviously, you would prefer that Walker Buehler was healthy, but Clayton Kershaw, Julio Urías, Tony Gonsolin and Tyler Anderson all pitched at a front-line caliber this season. Dave Roberts' Dodgers will begin their NLDS series against the San Diego Padres as the clear-cut World Series favorites. 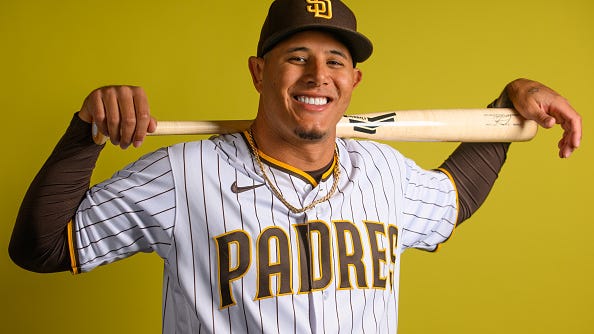