In Week 1 of the 2010 season, the Philadelphia Eagles wore their kelly green throwback uniforms, paying homage to the 50th anniversary of their 1960 NFL Championship.

The uniforms were so widely praised that it's led to a push by some current Eagles and a large portion of the fanbase to either return to the kelly green uniforms on a full-time basis or make it a regular alternate uniform.

The Eagles' organization has shown no inclination to move on from midnight green, the franchise's primary color since 1996. Given that they won the first Super Bowl in franchise history while rocking their midnight green jerseys, it appears unlikely that they will move on from that kit at any point in the near future.

That said, the team is currently unable to wear their kelly green uniforms and helmets as an alternate because in 2013 the NFL introduced a rule that forces all players to wear the same helmet all season. Though there is some indication that rule could soon be softened, until that happens, many NFL teams will be unable to wear their classic throwbacks once or twice a season.

The flip side of that, though, is before the rule was instituted, quite a few teams were wearing pretty hideous alternate or throwback uniforms, ones that have been shelved since the one-helmet rule came into effect. If that rule goes away, we may say the return of some of the ugliest uniforms in NFL history, including a few of these 10, which RADIO.COM Sports has determined are the worst the league has ever seen: 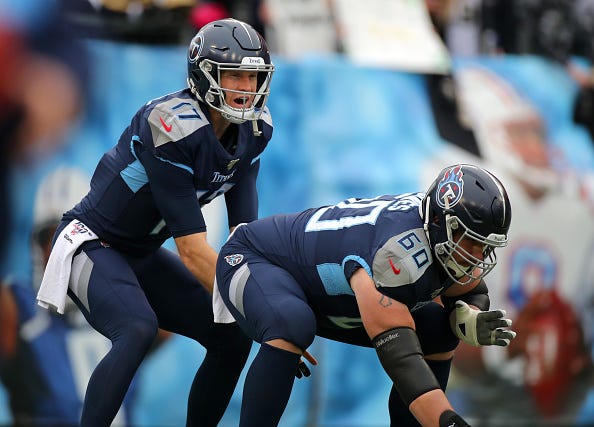 When the Titans' franchise moved from Houston to Tennessee in 1997, the kept the name and look of the Oilers for two seasons. Since changing their name to the Titans in 1998, the organization has managed to go from possessing one of the best uniforms in NFL history to a pretty awful look currently. In 2018, the Titans attempted to do a uniform refresh, one that almost feels like a bad take on the current Seattle Seahawks' look. If the Titans were smart, they would ditch navy blue and hone in on the powder blue that made the Oilers such an aesthetically pleasing team. 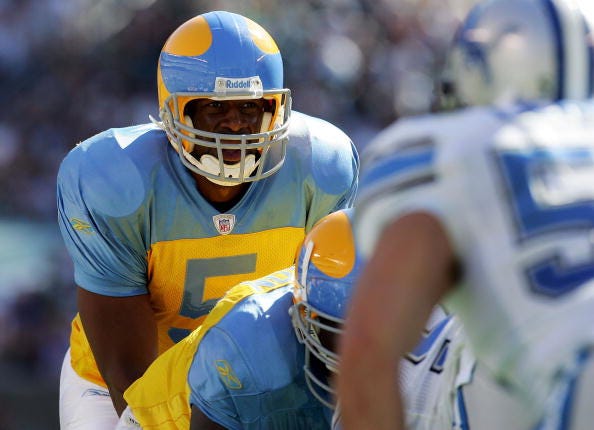 In Week 3 of the 2007 season, the Eagles paid homage to the team's powder blue and yellow look that was worn for the 1934 season. Donovan McNabb, Brian Westbrook and company put up 56 points that day, and all anyone remembers is how ugly the team's get-up was that day. Westbrook had over 100 rushing and receiving yards that day, making it one of the best games of his career. Still, he remarked in 2017 about how he wasn't a fan of the uniforms. 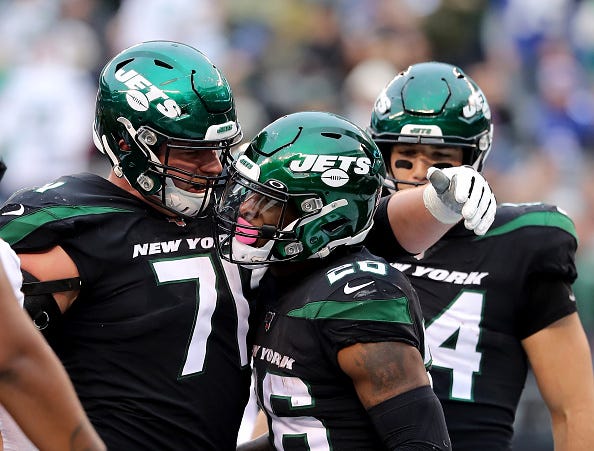 The Jets attempted to modernize their look in 2019, and they swung and missed. While there is a case to be made that the team did improve their helmets, the jerseys look very much like user-created ones in an old Madden game. The worst of the team's new uniforms are their black alternates, which are especially uncreative and really bring out how amateurish "New York" looks written across the chest. 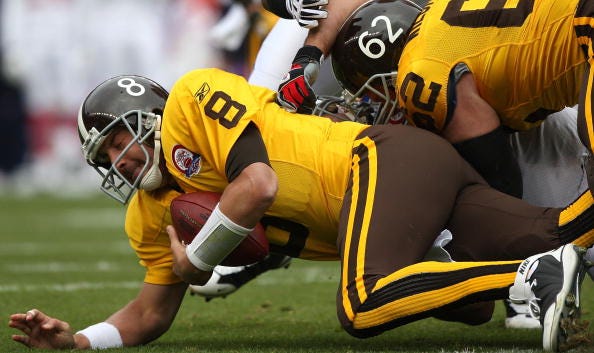 Kyle Orton and the Broncos had some brutal throwbacks in 2009. Photo credit (Jed Jacobsohn/Getty Images)

Even though they got off to a hot start in 2009, we probably should have known that Josh McDaniels wasn't set up for success in Denver based on the throwback uniforms that the Broncos broke out in his first season at the helm. During the 2009 season, the Broncos celebrated their 50th NFL season by mixing in both the home and road jerseys they wore in their franchise's first two seasons. The home ones, pictured above, look like a strange combination of the Washington NFL franchise's quarterback practice jerseys and the University of Wyoming's football uniforms. Hopefully, the Broncos don't break these out for any future anniversaries. 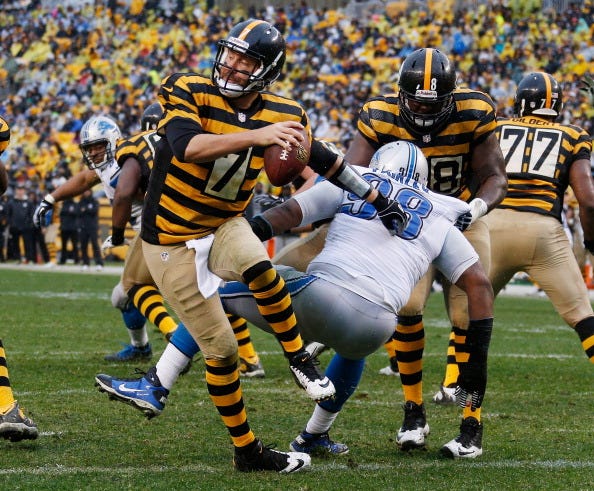 You ever see something so ugly that it almost becomes endearing? That's how we feel about the bumble bee alternate uniforms that ths Pittsburgh Steelers wore from 2012-2016, a modern take on one of the uniforms that the team wore in 1933, their inaugural season. The jerseys themselves are bad, but it's the matching bumble bee socks (and then modern cleats that don't begin to match) that really put this look over the top (or bottom). 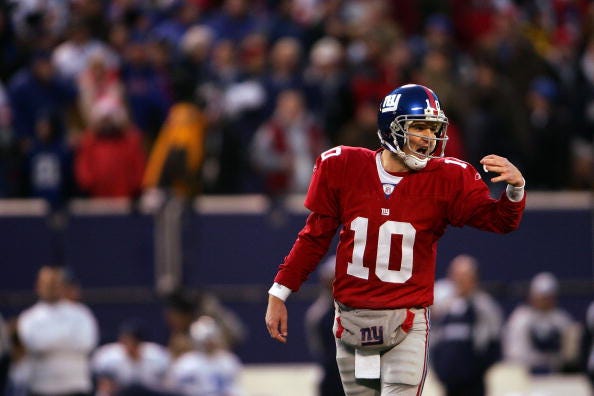 When you think of Eli Manning, it's possible that you think of his two Super Bowl MVPs. It's also possible that the team's alternate red jerseys, which paid homage to the team's look from 1940-1956, are so burnt in your mind that you can't think of Manning without picturing these. For four seasons, the Giants sported an alternate that looked like a quarterback's practice jersey. If they were looking to make aesthetic upgrades, perhaps they should have just considered putting "Giants" back on their helmets full time. 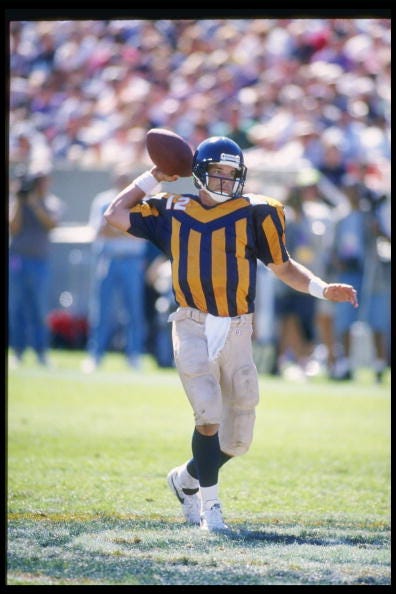 Erik Kramer and the Bears had a disastrous throwback in the 1994 season. Photo credit (Jonathan Daniel /Allsport

The striped throwback uniforms that the Chicago Bears wore in Week 3 of the 1994 NFL season were so ugly that there isn't even a landscape picture available of them. These uniforms were worn regularly by the franchise in the mid-1920s, and judging by the fact that the Bears lost 42-14 to the Minnesota Vikings while wearing them in 1994, they probably should have been left there. 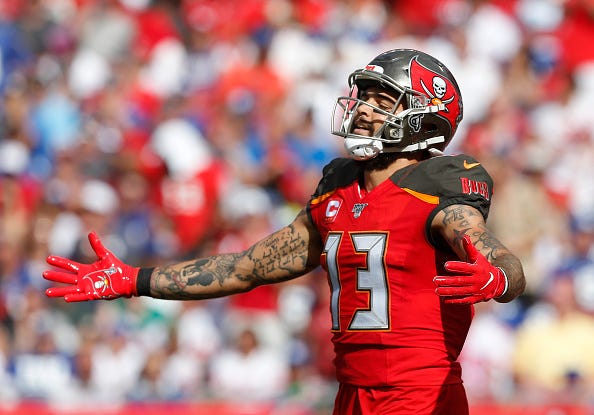 Not only did Jameis Winston's five years as the quarterback of the Tampa Bay Buccaneers feature some of the most inexplicable interceptions in NFL history, they featured one of the worst uniform sets that the sport has ever seen. In 2014, the Buccaneers attempted to refresh their uniforms and instead ended up creating a look that was more fit for a crossing guard. The Kool-Aid red was an especially awful look, as were the alarm clock-style numbers, the forced addition of orange onto the jerseys and the obnoxiously large helmet logo. Though the Buccaneers have kept the unnecessarily large Buccaneers' flag on their helmets for the 2020 season, they've returned to a look similar to what they wore from 1997-2013, just in time for the arrival of Tom Brady and Rob Gronkowski. 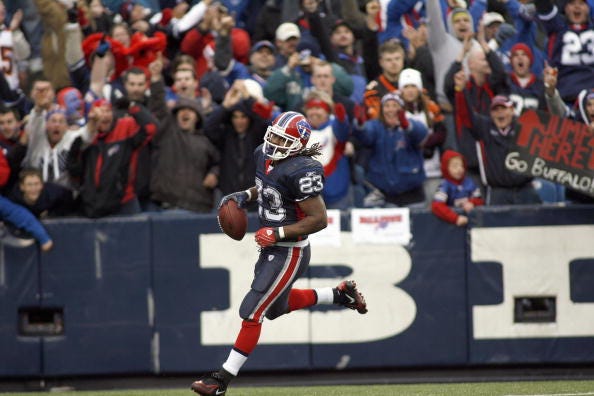 For as great of a look as the Bills have had for most of their existence, it's hard to excuse away the nine-season stretch where they prominently featured navy blue uniforms and helmets that were primarily red. During what we'll call the J.P. Losman era, the Bills wore by far the worst uniforms in the NFL, something they thankfully rectified in 2011. 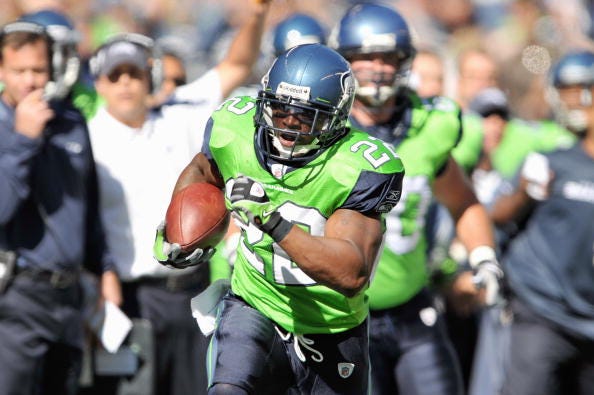 There's a debate to be had about whether the neon-on-neon "Color Rush" uniforms that the Seahawks introduced in 2016 are actually kind of cool in small doses. But there's no saving the neon/navy blue look that the Seahawks trotted out in Week 3 of the 2009 season. Like the Bills, the Seahawks entered the league with a great look and are among the best uniforms in the sport currently, but drifted off the trail in the 2000s. The primary uniforms that the Seahawks wore from 2002-2011 were brutal, and adding neon to them was the icing on the cake.