It does not appear as if the New York Giants are committed to Daniel Jones beyond this year.

Earlier in the week, ESPN’s Jordan Raanan reported that it seems likely the Giants will pass on picking up the quarterback’s fifth-year option, which they must decide by the deadline in May.

By declining the option, the Giants would save themselves from committing $20-plus million toward Jones in 2023 and essentially make him a lame-duck quarterback heading into this season.

Yet, it does not necessarily mean that Jones’ days with the Giants are numbered at the end of next season.

If the former first-round pick can put together a good season, it will present a difficult decision for the team: continue to commit to Jones for the long term, or find a new franchise quarterback.

Jones was drafted with the sixth overall pick in 2019 by former GM Dave Gettleman and Pat Shurmur as the head coach.

Joe Schoen and Brian Daboll are now the GM and head coach, respectively, and could decide they want to bring in their own quarterback as the guy to build the team around.

What the Giants choose to do with Jones is one of many big questions Schoen must address in his first offseason as GM.

Notably, Schoen has said he needs to shed $40 million in cap space, which could mean key veterans such as CB James Bradberry and WR Sterling Shepard could be cut.

It could also mean the Giants explore trading Saquon Barkley, whose fifth-year option was picked up by the previous regime last year.

Needless to say, there will be plenty worth watching as Schoen looks to rebuild the Giants. 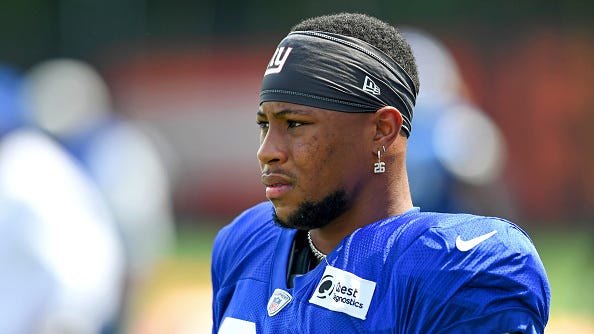