Stephen Strasburg’s 2022 has been put on hold once again.

Nationals manager Dave Martinez announced prior to Monday’s game that Strasburg felt discomfort after throwing a bullpen session this weekend, and he will not pitch Tuesday as scheduled.

“We don’t know if this is the same issue or not,” Martinez told the media, referencing the Thoracic Outlet Syndrome that required surgery and cost Strasburg more than half of 2021 and the first two months of 2022. “He threw his bullpen, the next day he didn’t feel so good. We were hoping it was just something that would go away. It didn’t."

Strasburg went for an MRI on Monday morning, and while the team is waiting for the results, Strasburg will go back to the injured list. The Nationals will make the IL move official on Tuesday, when they name an alternate starter.

“Right now, as I said all along, we’re going to be as careful as possible with him and try to do everything right for Stephen and for this organization moving forward. Right now, we’re at those bumpy roads and we'll see what happens."

Strasburg came off the injured list to start on June 9, and allowed seven runs in 4 2/3 innings in his first MLB action in 373 days – he had last started June 1, 2021 against Atlanta, lasting just 1 1/3 innings – but said he felt “very encouraged” by how he felt physically. 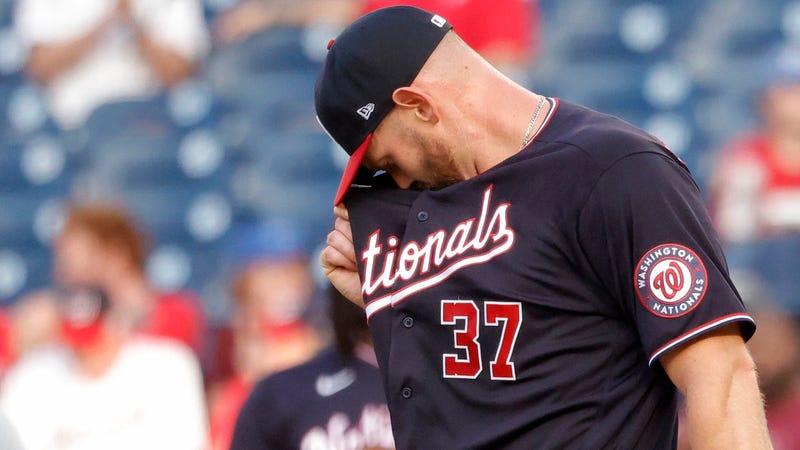 The righty went on the IL after that June 2021 start with a neck strain, and eventually required surgery for Thoracic Outlet Syndrome. That, and this latest setback, are just another bump in the road for the 33-year-old, who signed a seven-year, $205 million deal after helping the Nats win the 2019 World Series, but has pitched just 31 1/3 innings since.

Strasburg made just two starts (pitching five innings) in the truncated 2020 season due to carpal tunnel neuritis, and then missed five weeks in April/May 2021 with shoulder inflammation before going down in June with the neck strain that turned into Thoracic Outlet Syndrome.

The Nationals’ rotation had been fairly steady in April and May, but the team designated Aaron Sanchez for assignment shortly before Strasburg returned, outrighted RHP Joan Adon – who led MLB with 10 losses at the time – to Triple-A the day before Strasburg returned, and recently placed Josh Rogers, who started in Sanchez’s rotation spot in April before Sanchez returned from injury rehab, recently went on the IL himself with a shoulder impingement.

The team already called up Evan Lee from Double-A and is short of 40-man roster starting options, so short of a bullpen game, the Nationals will need to add someone to the roster. The Rochester rotation, in addition to Adon – who was pulled after pitching two innings on Sunday – contains two top 2020 draft picks in Cade Cavalli and Cole Henry, 2017 fifth-rounder Jackson Tetrault, and veteran Logan Verrett.