The possibility of Jim Harbaugh leaving Michigan for the NFL seems as real as ever.

According to college football insiders Nicole Auerbach, Bruce Feldman and Austin Meek, “sources close to the situation” believe that if Harbaugh receives an NFL offer, he will accept it.

This would go against what Harbaugh said last year after he interviewed with the Vikings, declaring that he would not consider returning to the NFL again.

Harbaugh said at the time that there was a pull to the NFL because he was so close to a Super Bowl when he coached the 49ers but said his focus is to catch college football’s greatest prize.

The 59-year-old head coach fell short of that, too, in what was possibly his best season at Michigan since taking over his alma mater’s program in 2015.

Harbaugh led the Wolverines to an undefeated regular season, going 13-0 and winning the Big Ten championship, but ultimately fell short of reaching the CFP championship with a loss to TCU in the Fiesta Bowl on Saturday.

It was the second consecutive season in which the Wolverines lost in the CFP semifinal bowl game.

If Harbaugh does receive an offer from an NFL team, the Denver Broncos and Indianapolis Colts appear to be the most ideal franchises that would pursue him.

Harbaugh played four seasons with the Colts during his NFL career and returning to his former team could be enticing. The Broncos have also been linked to Harbaugh, with NFL.com reporters Tom Pelissero and Ian Rapoport writing on Sunday that the Michigan head coach could be a fit. 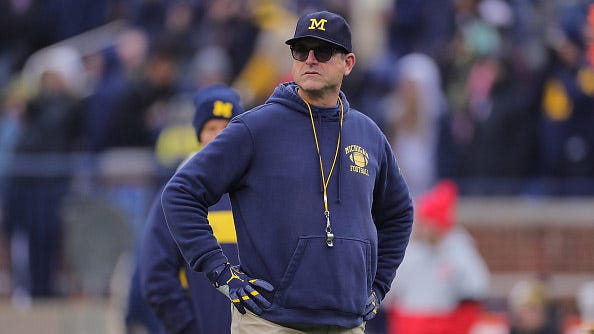 Could Jim Harbaugh leave Michigan for the Denver Broncos?

Harbaugh’s contract Michigan includes a $3 million buyout this year and decreases each year of his new deal. His contract also requires him to disclose any participation in a job search with the athletic director or risk being fired for cause, per The Athletic report.

In four seasons as head coach of the San Francisco 49ers Harbaugh finished with a 44-19-1 record and three playoff appearances, reaching the NFC Championship Game in each one. He reached the Super Bowl in his second season only to lose to his brother, John Harbaugh, and the Baltimore Ravens.