The Los Angeles Angels have two of the best players in baseball, but they don’t have much to show for it as a team.

Mike Trout has won three AL MVP awards in his career, which is coincidentally the number of playoff games the Angels have played in his career.

Shohei Ohtani took the league by storm in 2018 to win the AL Rookie of the Year Award and has continued that with the AL MVP last season. He’s once again among the favorites for AL MVP this year.

Despite having two of the best players in the game, the Angels haven't finished over .500 since 2016 and are 38-49 entering Tuesday. Might it be time for them to rethink things in Anaheim?

Former MLB players Cody Decker and Tony Gwynn Jr. talked about the possibility of the Angels trading their superstars on this week’s episode of Big Time Baseball.

“The Angels. It’s time to trade Trout and Ohtani. It’s time to move on and, quite frankly, start all over. They cannot win with this structure,” Decker said (18:08 in player above).

“It would be easiest if you trade both, but if you are insisting on keeping one, it’s time to trade Mike Trout,” Gwynn Jr. replied. “It blows my mind to even say that. … I’m a big Mike Trout fan. I want to see him playing in October when games matter.”

Trout is now a seasoned veteran and turns 31 next month. Ohtani is a few years younger at 28, but they’re hardly young players to build around.

The Angels have been looking to take that next step ever since getting swept by the Royals in the 2014 ALDS. However, they have disappointed year after year.

“He may be OK playing in Anaheim, wanting to stay there, he’s comfortable there, and I respect it. I had a father who was the same way. So I hold no issues with that,” Gwynn Jr. continued.

Trout would undoubtedly be the most sought-after trade target if the Angels were to make him available. Baseball superstars like Trout are rarely traded, but it might be worth it if the Angels want to reset things.

It would make more sense for the Angels to keep Ohtani, Gwynn Jr. opined, as the two-way superstar is worth the price of admission. Even during a rebuild, fans would show up to see Ohtani.

No matter what, the Angels would have to get back a large haul for one of their two superstars.

“If you trade one or both of these guys, you are getting a World Series in 2026 team back,” Gwynn Jr. said. “You’re getting back a ton of impact players that you know are can’t-miss impact players, top-of-the-line type prospects. We’ll see what happens, but at the end of the day, it’s been 10 years.” 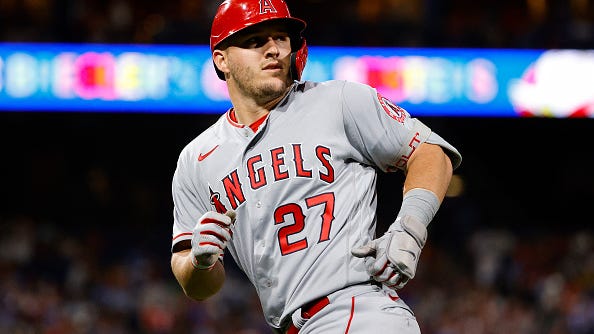 Mike Trout on future with Angels: 'This is where I want to be'