We’re in a great period of wide receiver play.

There are some who have been playing at a high level for years now, but nowadays guys are making an instant impact as rookies, and before they’re even in their mid-20s already are among the best at the position.

It’s for that reason that debates about the top wide receivers in the NFL are especially commonplace. You could make a case for a number of players to be considered the top wideout in the NFL, from Ja'Marr Chase to Davante Adams and Cooper Kupp.

One of the top wide receivers in his era, Torry Holt, thinks consistency over many years is a pivotal factor. For that reason, he told “The Zach Gelb Show” on CBS Sports Radio that Adams, not Kupp, is the top receiver in the game right now.

“When I look at who’s been the best consistently over the years, you’ve got to think Davante Adams over the years has been the best,” the Rams legend said. “He’s the best wide receiver right now in the National Football League, but you’ve certainly got to put Kupp up there.

“When you talk about last year, yes, (Kupp) was the best wide receiver last year in the National Football League. But consistently over the years, that’s got to come into play, you’ve got to factor that in, and who’s done that consistently the most I would say Davante Adams. But Cooper Kupp certainly is one of the premier wide receivers in our league.”

Adams does have a strong case, but this could be the year that things change. Kupp has been blossoming into a star over the last few years, but it was last season with the addition of Matthew Stafford that he really took off, catching 145 passes for 1,947 with 16 touchdowns in the regular season, all of which led the NFL. If he keeps building off that, he’ll be unstoppable.

And that comes as Adams goes to a more unfamiliar situation. He no longer has an all-world talent in Aaron Rodgers throwing him passes, but Derek Carr is no slouch and Josh McDaniels should be help get the most out of Adams. However, if he regresses at all this season in the new environment, that could pave the way for Kupp to supplant him as the top receiver in the game. 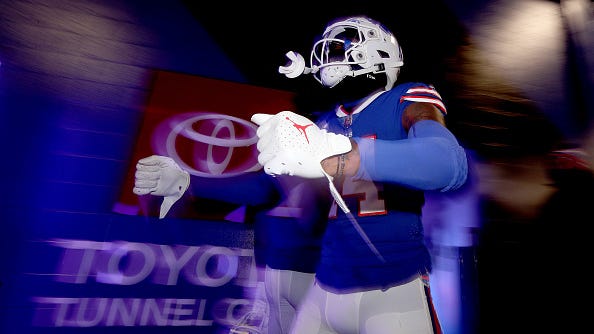