The Dolphins completed a stunning comeback against the Ravens in one of the best games of the young NFL season. Miami overcame a 35-14 deficit entering the fourth quarter for an improbable 42-38 victory in Baltimore.

Tua Tagovailoa had the best game of his career with 469 yards and six touchdown passes, including two each to Tyreek Hill and Jalen Waddle. The Dolphins’ future may be here now.

“The franchise quarterback is supposed to be the great eraser for when things are not going great, when you feel like you have no hope, can you just say forget about it? And that’s what he was able to do today, man. Never broke. Was never shook,” Tobin said (5:58 in player above).

“This is a game where he had Justin Houston basically having him run for his life at one point during this game. To shake all that and get to this where he is just throwing bombs to his new best friend Tyreek Hill, and Jalen Waddle is scampering all over the place, can’t be caught,” he continued. “That trio is what everybody was hoping for would be able to do this and it was just such an epic watch, dude. It was so exciting. It had everything everybody’s been waiting for. It felt like something that you had been promised.”

The Dolphins outscored the Ravens 28-3 in the fourth quarter to complete the comeback. That included two touchdown passes to Hill: one for 48 yards and one for 60. Both of those drives lasted less than 90 seconds.

“If we would’ve scripted out the best possible situation, the best game statistics wise, whatever you want to script out for Tua, this surpassed it,” Solana said. “Even TuAnon, who are the biggest Tua supporters who have been championing Tua harder than anybody, couldn’t have imagined he would have a game where he would throw six touchdown passes and he’d surpass 400 yards. Tyreek and Waddle would have a combined (361) yards, four touchdowns between the two of them. It’s crazy. It really is. When you really put it into perspective, it’s insane. I can’t even wrap my head around it.”

Prior to Sunday’s game, Hall of Famer Dan Marino held the top-five single-game passing yard leaders in Dolphins history. Tua didn’t quite reach Marino’s franchise-high 521 yards, but his 469 gives him the fourth-best game in franchise history. Furthermore, Tua joined Marino as the only two Dolphins quarterbacks to throw for six touchdowns in a game.

All in all, Hill and Waddle both caught 11 passes for over 170 yards (Hill 190, Waddle 171), with two touchdowns each. That had to feel good for the wide receivers, especially Hill.

“It was crazy. It had everything that you would want because it’s not only that you have the epic fourth-quarter comeback, but Tyreek Hill bombs, which is just – he’s gotta feel great with this, too, because he knows everybody was laughing at him,” Tobin said. “Everybody’s laughing at him the first couple of games with Kansas City and ‘Oh, they don’t need Tyreek Hill. They can go on without Tyreek Hill.’ And so he’s got a double middle finger game to show you ‘See, I told you,’ that’s gotta feel great for him. Mike McDaniel, everybody who’s been singing Tua’s praises and saying no, no, no, this guy can do it, don’t be so hard on yourself Tua, and for him to finally see the fruits of that on display with this kind of a victory is just unbelievably awesome. It was feel good all around.” 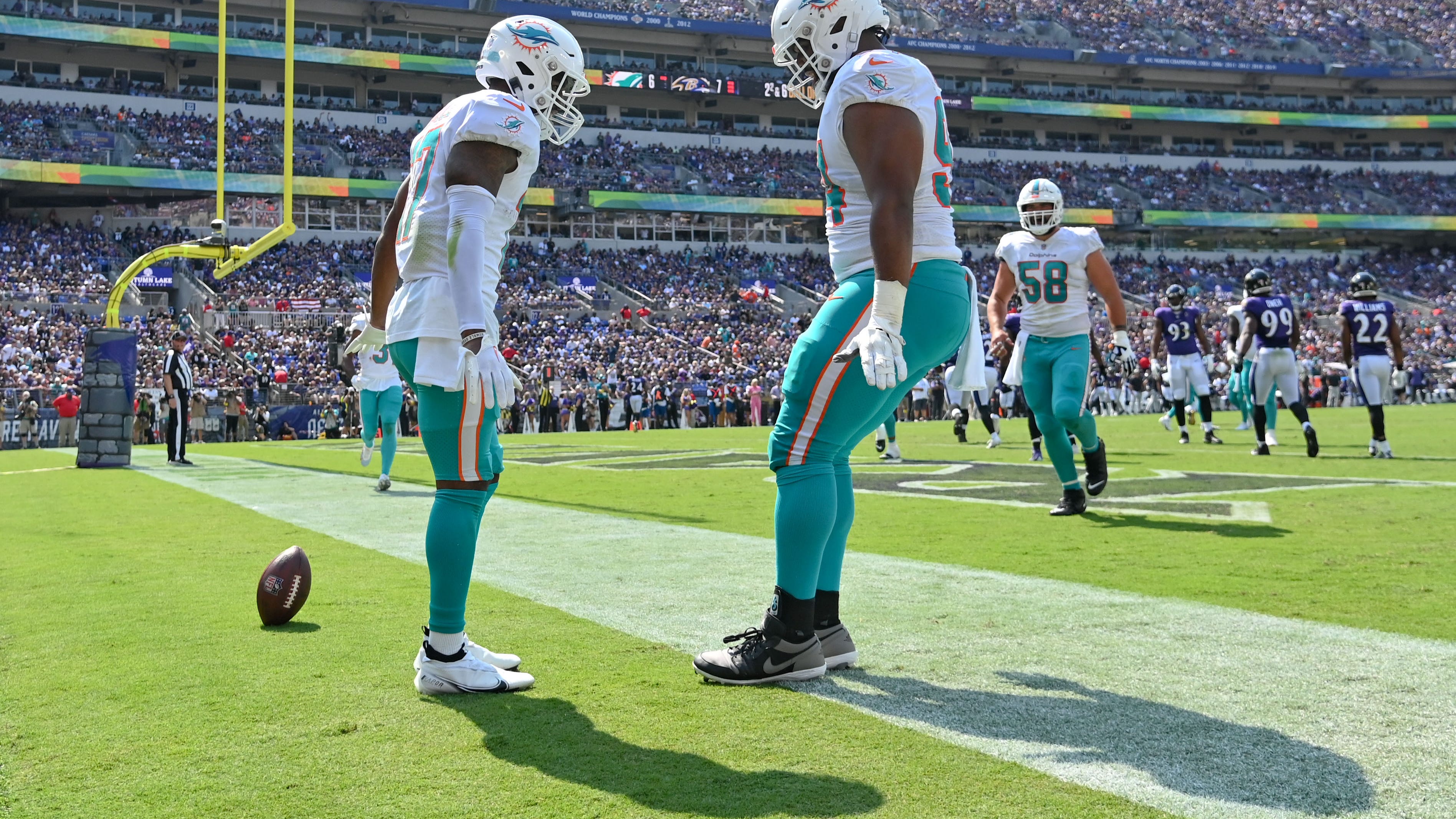