The NFL trade deadline isn’t usually as busy as the deadlines in other major sports leagues, but this year could be different. Panthers running back Christian McCaffrey is reportedly on the block with Carolina in turmoil.

The 2017 first-round pick holds the NCAA record for most total yards in a season and set several Panthers and NFL records as well. Injuries limited the dynamic running back to just 10 games over the last two seasons, but he's off to a strong start in 2022.

Danny Parkins and Andrew Fillipponi of the Audacy Original Podcast “1st & Pod” talked about which contenders make the most sense to trade for McCaffrey before the November 1st deadline.

“The report was that they’re getting a ton of calls for McCaffrey, who had 158 yards from scrimmage (on Sunday)” Parkins said (6:06 in player above). “If you’re a contender and your second-round pick is going to be somewhere from the 55th to 64th pick in the draft, would you do that trade if you’re Carolina?”

“In a heartbeat,” Fillipponi said. “I think that’s an easy deal to make. I think both sides come out of that looking good.”

Parkins thinks that “Buffalo makes a ton of sense to do that trade,” but Fillipponi disagrees.

“I don’t like that deal for them. I would not do that if I were them. Because I just think if you do that then it gets in your head, ‘We got to keep McCaffrey involved. We got to make McCaffrey a part of our offense.’ I just don’t want to midstream with a first-year offensive coordinator put that kind of pressure on what they’re doing right now. I would not trust them to seamlessly add him to that offense,” he said. “I think that that actually might do more harm than good. I would not mess with that if I’m them. I don’t think it’s worth it.”

The pair agreed that Baltimore would make sense, but Fillipponi opined that the Ravens might be too weird about their draft picks to do that.

The guys also mentioned the Eagles, Giants, Cowboys, Vikings, Buccaneers, and Dolphins as the contenders, but noted that none of them really need help at running back. However, there is one contender in the mix that could use an upgrade.

Parkins floated the idea of the 49ers trading for McCaffrey in Kyle Shanahan’s offense.

“That’s a really good one,” Fillipponi said. “Because right now it’s Elijah Mitchell on IR and Jeff Wilson’s fumbling the ball (on Sunday) and it’s getting picked up and going the other way for a touchdown. They’ve done aggressive things. They traded for Emmanuel Sanders. I like that deal.”

With the Panthers in the basement of the NFL, they should be looking to trade whoever they can. They kicked Robbie Anderson off the sideline on Sunday and traded him to Arizona less than 24 hours later.

Their star running back could be next out the door.

“McCaffrey’s the perfect player to be traded in-season to a contender. He should be able to make any team better,” Parkins said. “I hear what you’re saying with Buffalo, that’s a compelling point because their offense is just so damn good, but he feels like the exact type of player that should fit on any team.” 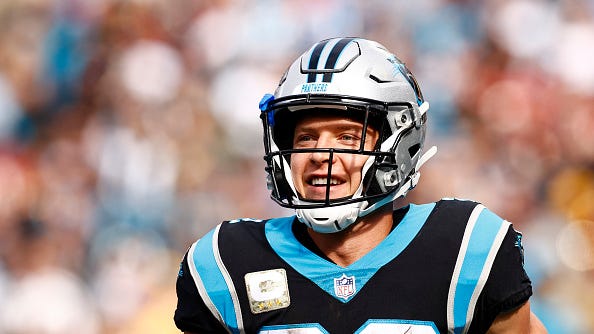