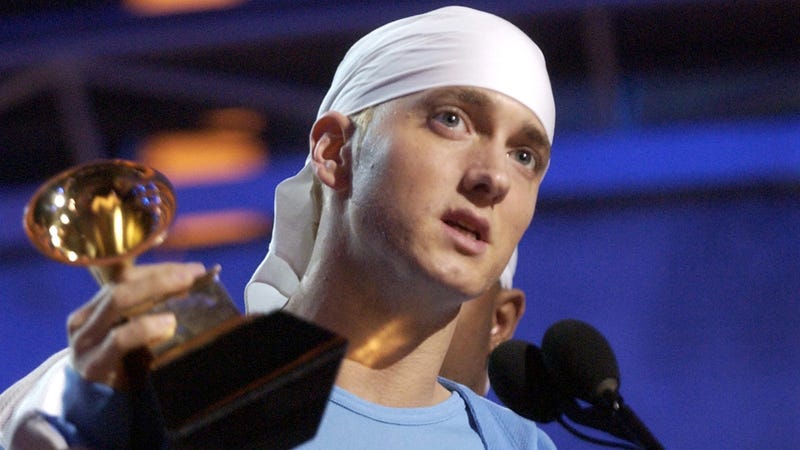 Audacy's Run That Back series is a deep dive into some of music’s most popular or underrated projects. Whether it’s been 5 years or 50, there’s never a wrong time to run that back. Today, May 26, marks a milestone as Detriot rapper Eminem's fourth studio album, 2002's highly anticipated The Eminem Show, steps out of its teens and into an official second decade since its release.

Originally scheduled for release in June of 2002, Eminem's The Eminem Show was pushed up a few weeks into May by those in charge (Dr. Dre’s Aftermath Entertainment, Shady Records, and Interscope Records) because of a proliferation of bootlegged copies making their way into fans’ hands. Deviating from his past offerings, this was mostly self-produced, along with his longtime musical partner Jeff Bass, while Dr. Dre helmed the project as executive producer. Dre also managed to find his way onto the album, as did a few other close friends including the D’s own Obie Trice and D12, late California rapper Nate Dogg, singer Dina Rae, a sampling of Boston rockers Aerosmith, and Em's seven-year-old daughter, Hailie Jade.

Clocking in at 20 tracks (five of which are skits), The Eminem Show -- which debuted at number one on the Billboard 200 and stayed put for six non-consecutive weeks -- kicks in the door on the very first song. "White America" asks plainly, "How many people are proud to be citizens of this beautiful country of ours?" In Eminem's trademark ironic tone, he gives a verbal lashing to those in power trying to silence him, and an ever-growing population of disenfranchised youth gathered behind him.

Eminem had a major hit on his hands following the release of The Eminem Show, becoming 2002's best-selling album worldwide, and ranked number 317 on Rolling Stone's list of The 500 Greatest Albums of All Time, and later number 84 on their list of the Best Albums of the 2000s.

These accolades came, thanks in no doubt, to the massive success of his solo singles, "Without Me" and "Cleanin' Out My Closet," as well as his collaboration tracks "Superman" featuring Dina Rae, "Sing for the Moment" featuring a heavy sampling of Aerosmith's "Dream On," and "'Till I Collapse" featuring the late Nate Dogg.

The 2003 GRAMMYs were also kind to Mr. Mathers, offering up a nomination for Album of the Year, and wins for Best Rap Album, and Best Music Video for "Without Me." At 27-million copies sold, certified Diamond in the U.S and Canada, and Double Diamond down under in Australia, The Eminem Show has staked a claim as one of the best-selling albums of all time and the second best-selling album of the entire 21st century -- topped only by Adele's 21 at 30-million copies sold, and tied with Norah Jones' Come Away With Me. Strange neighbors, for sure.

Celebrate The Eminem Show 20 years on with Audacy’s Eminem Radio -- where you’ll hear music from every era of Marshal Mathers' career and more from artists you're sure to love.