CLEVELAND, Ohio (92.3 The Fan) – Donut tracks on the field, a skunk in the stands and the G.O.A.T. gets taken to and beaten in OT.

Just another ho-hum Sunday afternoon in Cleveland as Jacoby Brissett goes off a winner in what is expected to be his final start with the return of Deshaun Watson this week.

“I just gave him a game ball,” head coach Kevin Stefanski said. “I am really happy for Jacoby. He is a great leader. He is a great teammate. That is why he got a game ball. We are going to need him to continue to be a great teammate and a great leader. That is his role on this football team. He battled like crazy. Again, that is a really good defense. It was a great effort by him.”

Here are our Top Takeaways from Sunday’s 23-17 overtime thriller against the Buccaneers that saw the Browns rally for a rare come-from-behind win.

2. How about that? The Browns snatched victory from the jaws of defeat to beat the best to ever do it. We could definitely get used to that.

3. The stars shined bright – Myles Garrett, Jadeveon Clowney, Nick Chubb, David Njoku and Amari Cooper – and all of them made big plays when it mattered most at critical moments down the stretch and in overtime. Again, we can get used to that.

4. Chubb lit the spark to give the Browns a pulse late in the fourth quarter with them trailing by 7, 17-10, and the ball at the Tampa Bay 40. Chubb ripped off a 28-yard run to the 12 to set up the tying touchdown. In Overtime, after the Buccaneers jumped offsides, he kept his legs churning and punched in the game winner from three yards out with 19 seconds left to win it. Chubb’s final stat line: 26 carries, 116 yards and a touchdown.

5. After Chubb’s 28-yard run that followed the 2-minute warning, four plays later on fourth-and-10, Njoku authored His own version of ‘The catch.’ “Honestly, it was a great catch – don’t get me wrong – but I wasn’t surprised,” Brissett said. “I thought I threw it too high and I was about to start crying. I saw him pull it down, and I was like, ‘I could have ran up and kissed him.’ Clearly I didn’t.” Njoku made an incredible one-handed catch with his left hand mid-air in the end zone to tie the game at 17 and force overtime. “I think Jacoby threw a perfect ball,” Njoku said. “I don’t know what the hell he was saying before about ‘too high.’ That was perfect. Kudos goes to him.” It was the most sensational catch of his career. “My career isn’t over yet. Maybe. Sure,” Njoku said with a smile. 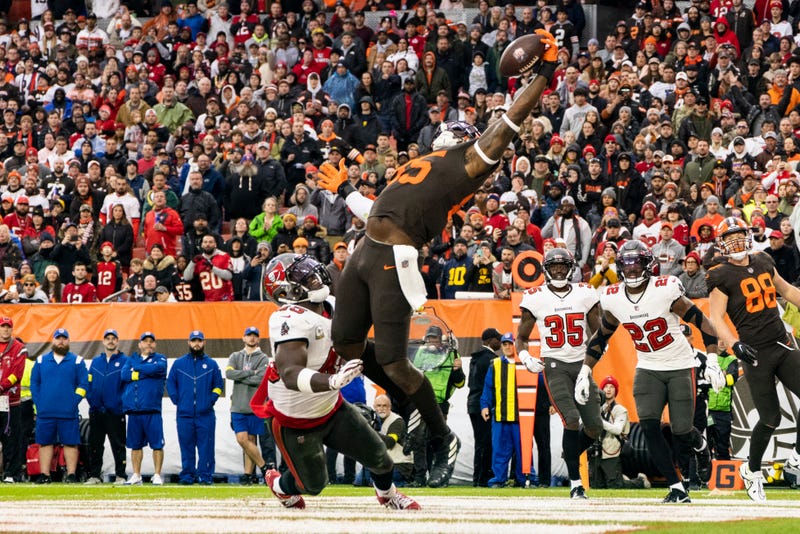 6. You have to respect Stefanski’s honesty when he was asked about deciding to kick the PAT and go to overtime versus going for 2 and the win or loss after Njoku’s catch. “I just didn’t love our two-point play, I will be honest, and I designed it so blame me,” Stefanski said. “Just felt like with those body blows going back and forth kind of liked where we were on defense and felt like it was the right thing to take it to overtime.”

7. Thank the Buccaneers for some pretty lousy clock management in the final 38 seconds that saw them fail to call a timeout after a screen pass that kept the clock rolling and ultimately cost them an opportunity to win the game in regulation after Tom Brady connected with Julio Jones to get near midfield with 8 seconds left.

9. Garrett and Clowney wrecked that game down the stretch. The pair combined to sack Brady with 2:21 remaining on third down to give the offense one last chance. Garrett dropped Brady again on third down in overtime to get the Browns the ball back with 2:45 to play. “If you're that guy, you view yourself making those kind of plays in those moments against that kind of competitor, someone who's achieved greatness day in and day out like that,” Garrett said. “It's no better feeling, and this one was really special to me.” Clowney finished with half a sack, a tackle for loss and QB hit while Garrett was credited with 1.5 sacks, a TFL and 3 QB hits. It was Clowney’s first win over Brady. “It feels way better,” Clowney said. “We have seen the opposite side a whole lot so to be on the good side of the scoreboard is great. It feels great to be back in the winning column. It has been hard for us to get wins around here. It feels good to get a win against the GOAT of the game. Hopefully, it will be the start of something new for us around here. We are going to keep playing like we did today. We aren’t going to quit on each other.”

10. Brady’s farewell to Cleveland lacked the electrifying performance we’ve been accustomed to seeing from the future Hall of Famer as he fell to 7-2 all-time against the Browns. Brady completed 29 of 43 passes for 246 yards and a pair of touchdowns in the loss.

11. Once again, the Browns started fast before the offense went into hibernation before waking up just in time. Receiver Anthony Schwartz scored on an end around reverse from 31 yards out. Kareem Hunt, in for Chubb, took the handoff from Brissett running left before flipping the ball to Schwartz, who was running right. Brissett helped to get Schwartz into the end zone with a downfield block at the 10 to give the Browns a 7-0 lead. “He is great,” Schwartz said of Brissett. “He did everything he could to win us games. He is a starting quarterback in the league and a great leader and great guy. He is someone the whole team rallies behind and someone that I wanted to rally behind. I really appreciate him and everything he has done for us.” It was Cleveland’s sixth opening drive score of the season.

12. Amari Cooper is as reliable as they come for a receiver, but he dropped a fourth-and-10 throw from Brissett with just over 8 minutes to play in the fourth at the 31. Cooper was wide open when the ball hit him right in the hands. He dropped to a knee after the ball fell harmlessly to the ground. “I have to be honest, I was just thinking about how easy it is to be humbled,” Cooper said. “I think I am a pretty good player, and I catch that ball 100 times out of 100. I was thinking about my relationship with God to be honest. I realized he has the power to make the weak strong and the strong weak, and I felt really weak in that moment. The team depending on me on fourth down. What does that say about me? Big time players make big time plays in big time situations.” Cooper made up for it by hauling in a 46-yard pass to the three, setting up Chubb’s game-winning run. “I just had faith that I would be able to come back and make a play,” Cooper said. “It felt amazing. Caught the slant. Had a double-move we drew up and knew if I ran it the right way that it would be a big play so it felt good.”

13. Brissett deserved so much better than 4-7, but he at least ends his tenure as the starter on a high note and with one of the more improbable victories for the franchise in the expansion era. He played incredibly well over these 11 games, exceeding expectations, leading by example and handling himself with professionalism and class. “I feel like this week y’all feel like I am about to die or something,” Brissett said. “I still have a job to do. I’m still on the team. I will figure that out when the time comes, but I still have to be the same person every day no matter my situation or status. I think that is what makes me me. I am excited for him to come back. Looking forward to next week.” It should come as no surprise his teammates just gushed about and with appreciation for him after the game.

14. If this football thing doesn’t work out for Wyatt Teller, he’s got a future in comedy as the funniest player on the team. he dropped this gem when talking about Brissett’s final start after the win. “He’s not dying, let’s get that straight,” Teller said. “He’s still on the team….I would have rather just been 11-0, 10-1, that would have been fun. But it's been a hell of a ride, ups and downs. He's done absolutely amazing for what we've asked of him.”

15. As has been often the case, it took the opposition no time to counter Cleveland’s opening salvo. The Buccaneers walked right down the field and scored on Brady’s 10-yard pass to Chris Godwin to tie the game at 7.

16. Tampa Bay finally broke the 10-10 stalemate by marching 80 yards down the field to take a 17-10 lead after Brady found Ko Kieft for a 5-yard touchdown with 7:41 remaining in the third quarter.

17. Cade York’s 39-yard field goal into the Dawg Pound in the second quarter was missed so far to the left the football might have landed in Lake Erie. York hit from 51 into the west end in the first quarter.

18. Aside from York’s missed field goal, the special teams unit wasn’t terrible Sunday. Jerome Ford ripped off a 44-yard return out to the 43 with 31 seconds remaining in the first half. Give Donovan Peoples-Jones some credit too for the longest punt return of the season – 29 yards in the third quarter that the offense did nothing with. Peoples Jones averaged 15 yards per punt return after totaling 75 yards on five attempts.

19. Considering it was Brady’s final appearance in Cleveland, the amount of empty seats was stunning. The forecast for constant rain combined with the home team entering the game 3-7 likely kept some fans away.

20. Deshaun Watson is up next. Time to start earing that $230 million.