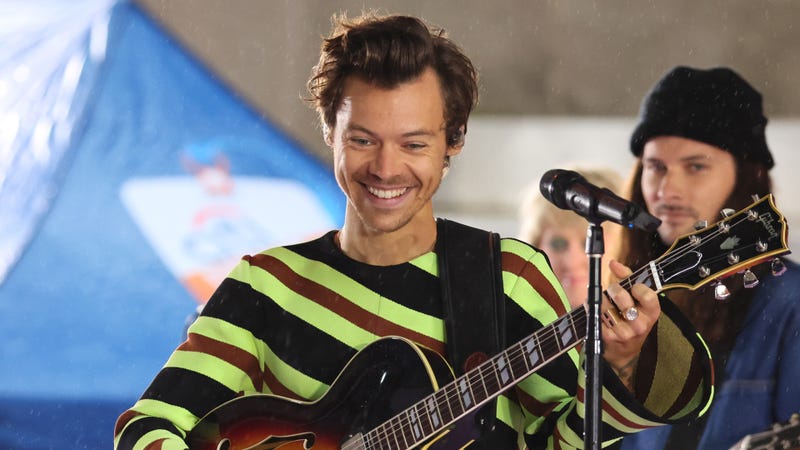 In a segment for The Late Late Show With James Corden, Harry Styles and James Corden went hunting on the streets of New York for the perfect Harry’s House stand-in to create a DIY music video for his single “Daylight.”

Offering his directorial eye, James challenged himself and his longtime friend and superstar to find a location, props and costumes, all in three hours time and with a budget of only $300.

After striking out the first couple of times, with one lady proclaiming, “I’m about to head out for the day” and another declining, despite the excited stirring of people behind her, James and Harry finally found the perfect spot, which they gained access to under the ruse of a pizza delivery.

“I thought this would be easier Harry, I’ve got to be honest — I thought your face would open a lot of doors,” Corden said just before approaching the the apartment in question, that luckily housed 4 excited millennials, Isabel, Caroline, Hadley and Sydney, all of whom had a giddy affection towards Styles, as to be expected.

After touring the apartment, during which James jokingly advised one of the women to hide her collection of Harry Styles and One Direction merch, it was finally time to get to work. First step, assembling silly props and costumes, like an oversized red bow and a gold bowler. Second step, setting up the shot.

For the first shot, Corden directed Styles to lay down in a bath tub to sing the chorus, as some very trendy different color mood lighting drenched the room. “I want this to be like, sexy as f***, okay?” Corden said before he instructed Styles, who could barely hold in his laughter, to pop his top off.

"It's the end of the night, so pop your top off" ...who can blame him for trying? #CORDENxDAYLIGHT pic.twitter.com/pwzoPrJYUE

At one point, Harry comically addressed the camera, “I can’t stress this enough, this was all James’ idea,” said Styles. “Should we just scrap it? Is it too late to just do Carpool Karaoke?”

Joking, of course, and good thing too, because NGL, the music video didn’t turn out half bad, considering the limitations and all.

After, the roommates broke their landlord’s rules and and let Styles film on the apartments rooftop, where James actually donned a full-body green suit for some blue bird special effects (you'll see what we mean), the girls then cut up some wrapping paper confetti, hung up decorations, invited over some friends and actually ordered pizza, to have themselves a not-so-make-shift party, and perfect music video setting.

Ahead of the segment airing Isabel, Caroline, Hadley and Sydney, were contacted by Variety, to talk about the experience.

Oh and just in case you were wondering, after making it a point to mention, “If we knew they were stopping by we would’ve at least brushed our hair!” The girls assured the publication that those party scenes were “very much real.” Adding that at the time the album had not yet been released, so getting to listen to “Daylight” was beyond major.

Watch the segment followed by the DIY “Daylight” music video below. And to check out the entire chat between Variety and the ladies — click here.