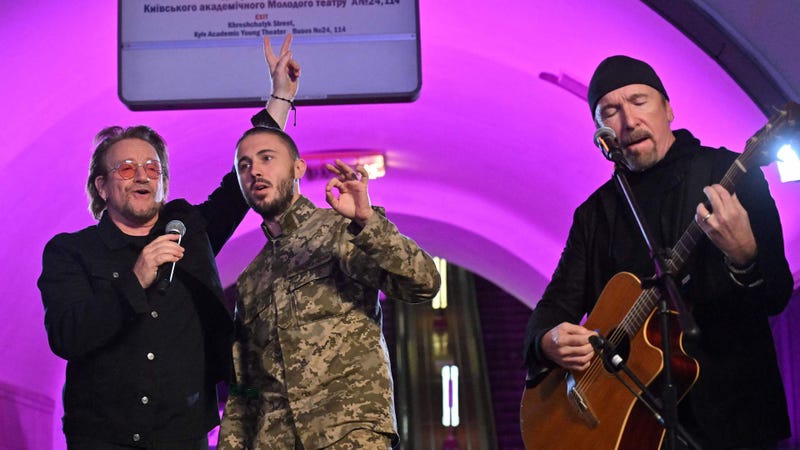 Bono and The Edge showed their support for Ukraine by performing an acoustic set in Kyiv over the weekend.

Listen to U2 Radio, now on Audacy

The U2 bandmates played a 40-minute set at a Kyiv metro station that had been converted into a bomb shelter. The performance was scheduled ahead of time as both Bono and The Edge were invited to the Ukrainian capital by President Volodymyr Zelenskyy.

“President @ZelenskyyUa invited us to perform in Kyiv as a show of solidarity with the Ukrainian people and so that’s what we’ve come to do,” the band tweeted this past Saturday.

President @ZelenskyyUa invited us to perform in Kyiv as a show of solidarity with the Ukrainian people and so that’s what we’ve come to do. -- Bono and The Edge #StandWithUkraine

According to the Irish Times, the band performed a medley of hits including “With or Without You,” “Desire,” “Angel of Harlem,” “Vertigo” as well a rendition of Ben E. King’s “Stand By Me” that replaced “Me” with “Ukraine.”

“The people in Ukraine are not just fighting for your own freedom, you are fighting for all of us who love freedom,” Bono told the audience. “We pray that you will enjoy some of that peace soon.”

During the set, Bono and The Edge were joined on stage by several Ukrainian soldiers as they sang alongside the U2 stars.

U.S. Secretary of State and self-professed “amateur guitarist” Anthony Blinken tweeted out a video of the performance and showed his support.

"It’s a Beautiful Day in the Kyiv metro," he wrote. "The people of Ukraine have shown remarkable determination and resilience in the face of this brutal invasion. WE stand #UnitedWithUkraine and support its pursuit of more peaceful, democratic, and beautiful days ahead."