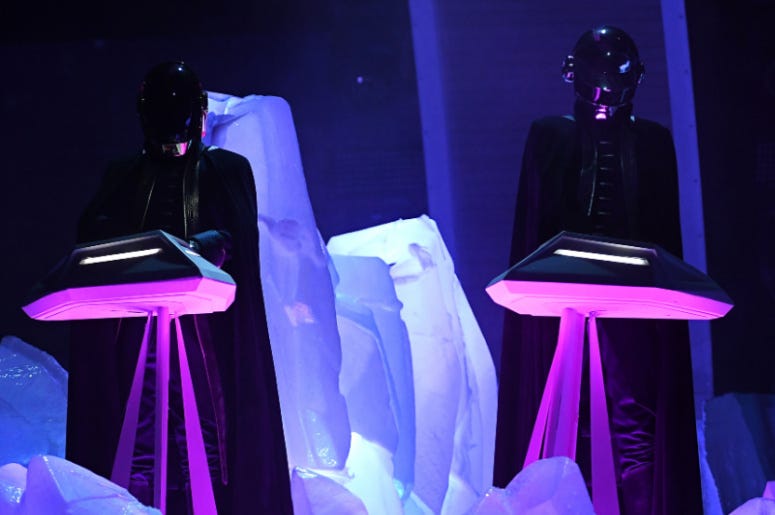 On Monday, Daft Punk released an eight-minute long video titled “Epilogue” on their YouTube channel containing excerpts from their 2006 film Electroma. The video builds to a climax as the two robots are walking in a desert before one of them presses a button on the other to blow them up. Shortly after the robot explodes, a graphic featuring the text “1993-2021” is displayed on the screen.

The band’s publicist confirmed to Pitchfork that the duo has broken up, but did not cite a reason.

Guy-Manuel de Homem-Christo and Thomas Bangalter formed Daft Punk in Paris in 1993 after their indie rock band Darlin’ disbanded. The duo took their name from a negative review that described Darlin’s music as “daft punky thrash.”

Daft Punk burst onto the scene with their 1997 debut record Homework, a landmark dance album that brought worldwide attention to the French house music scene. The single “Around the World” helped propel the group to international success and is considered one of their most popular tracks.

They returned in 2001 with their album Discovery, a record that saw the duo incorporate disco, R&B, post-disco, and funk sounds to create a minimalist, yet expansive body of work.

The album yielded the hit singles “One More Time” and “Harder, Better, Faster, Stronger,” the latter of which Kanye West sampled on his 2008 hit “Stronger.” It was during this period that the duo adopted their trademark robot costumes as they claimed to have become robots as a result of an accident in their studio.

Following the release of their third studio album Human After All in 2005 and the live album Alive 2007 in 2007, the duo shifted gears and scored their very first film. Fittingly, Daft Punk provided the soundtrack for the 2010 science fiction action film TRON: Legacy.

In 2013, Daft Punk returned with their first new studio album since 2005 with the release of Random Access Memories. The album marked a departure from the duo’s previous records as they leaned heavily on live instrumentation and limited their use of electronic instruments.

As the last studio album the duo would release, it marked a fitting end in retrospect. The album was Daft Punk’s first to top the Billboard 200 chart and took home three GRAMMY awards for Album of the Year, Best Dance/Electronica Album, and Best Engineered Album, Non-Classical.

The single “Get Lucky” featured Pharrell Williams and Chic guitarist Nile Rodgers and proved to be one of the group’s most commercially successful singles with over 9.3 million copies sold to date. The song took home two GRAMMY awards for Record of the Year and Best Pop Duo/Group Performance.