Recently uncovered in Morocco, a 66 million-year-old fish was found to be as large as a great white shark based on a fossilized lung that was discovered.

The fish, likely a member of the coelacanths order of fish, would have been 17 feet (5.2 meters) long. Coelacanths are known as living fossils thought to be extinct until a live specimen was found in 1938, Live Science reports.

The lung was found amongst several other bones belonging to pterosaurs. The findings confirm that the coelacanth dates back 66 million years ago, just before dinosaurs became extinct.

"It is absolutely enormous; it's a giant coelacanth, in a place we have never found them before," study co-author David Martill said. Martill is a paleontologist at the University of Portsmouth in England, and the study was published in the journal Cretaceous Research. 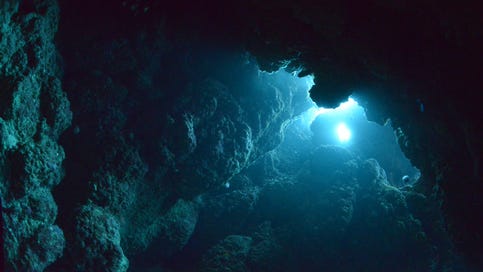 The slab of fossilized fish parts was bought by a private pterosaur collector in London. Originally thought to be part of a pterodactyl skull, the buyer brought the fossil to Martill for further investigation.

Upon seeing the slab of fossils in person, Martill determined that it was hundreds of very thin sheets of bone rather than one large one.

Martill then separated the lung from the slab of fossilized bones for further analysis from Brazillian paleontologist Paulo Brito, who was "astonished" at the size of the specimen.

While it is unclear where the rest of the body of this creature could be found, damage to the lung suggests that it was bitten by a massive predator who may have eaten the fish.