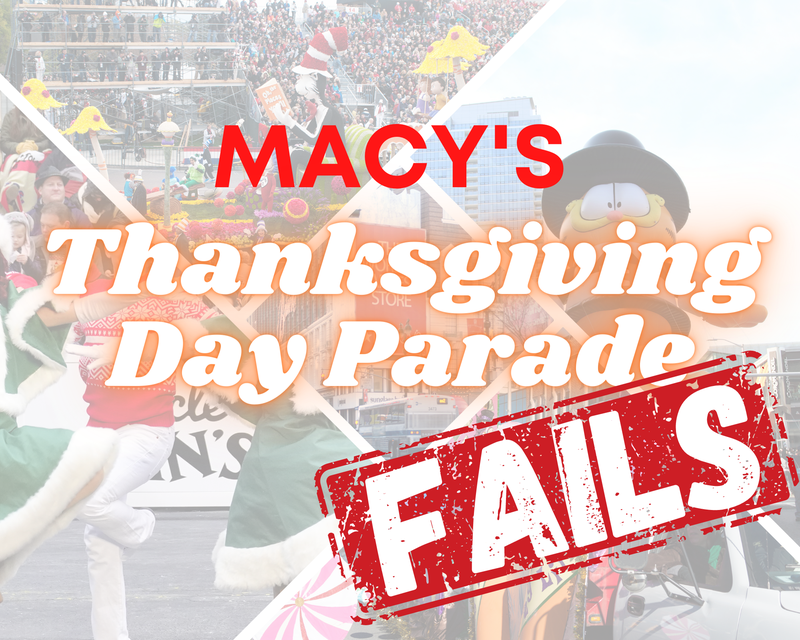 Nobody watches the Macy's Thanksgiving Day Parade for the train wrecks, BUT The "Hollywood Reporter" put together a list of 13 times the parade WENT WRONG and here's our thoughts the top seven.

The balloon hit a street sign and completely deflated in 1956. While there is no footage for this, to help you gauge how big these balloons really are here's a quick inside peak about these beloved balloons.

The 1985 parade, One of Superman's arms got caught on a tree branch. From that point on he seemed to have a tough time, check out The Superman Balloon's full history with this clip.

3. Kermit The Frog's creepy stare down:

1991, poor Kermit The Frog hit a tree, and his head to became partially deflated, making it one of the creepiest stare downs in history.

4. The Cat in the Hat hits people with a Street Lamp:

The 1997 parade was a very windy day in New York, and the Cat in the Hat hit a lamppost. It immediately fell over into a crowd of people and even fractured a woman's skull. The video is chilling.

We're still in 1997 because those winds were vicious and ripped apart poor Barney (cue the Clean Up song). Whether you loved Barney or wanted his off this earth, this was no way for him to meet his demise. The way he's waving as he's being ripped apart is SO sad.

Another balloon on lamppost crash in 2005, which resulted in two sisters getting injured. The balloon did go on to appear in other parades after its 2005 fiasco. The creepy part is when the commentators are talking about the balloon and M&Ms they keep talking about the M7M being in a huge dilemma.

We all know that everyone lip-syncs for performances now a days. However Scotty McCreery missing his queue to start singing is pretty bad. It's so bad it makes your Thanksgiving food baby look good.