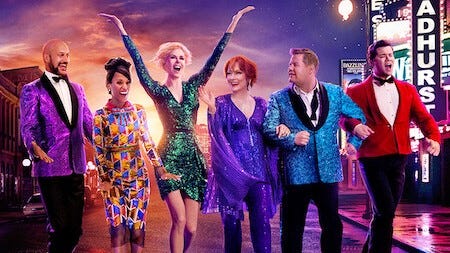 The cast of Netflix's "The Prom" Photo credit Netflix
By KYW Staff, Audacy

Pride Month, celebrated every June, is a special time for stories centered on the experiences of the LGBTQ+ community. And what better way to honor LGBTQ+ stories than binge watch movies throughout Pride Month?

With that in mind, then, here is a list of a dozen of our favorites to help you celebrate LGBTQ+ stories of action, joy, pain, history and Pride.

Are you lost in queer vernacular when you watch “RuPaul’s Drag Race”? Are you having trouble understanding the rules of engagement in “Pose”? This documentary has the vital information you need.

“Paris is Burning” (1990) started as a film school project for director Jennie Livingston, and it has become a cultural touchstone across gender, race and sexuality.

Livingston trains her focus on the mostly Black and brown drag queens and gender nonconformers who evolved New York City’s clandestine ballroom culture, and built up a community for an underprivileged, mostly poor, class of queer people..

The ballroom scene wasn’t a hobby; it was as necessary for life as oxygen — to a community drowning in excellence but starved for hope. With doorways to opportunity locked and the odds against them on the outside, the ballroom was a refuge, where creativity drove the fantasy of competition, winning was winning, and reputation was everything.

Bonus points for following up “Paris” with the 2016 documentary “Kiki,” seen by some observers as a sort of sequel. Painted with the same colors but on a new canvas, the film examines an inclusive community of performers from Harlem, New York; their passion for dance, art and expression; and the challenges of honoring their identity and heritage.

“Paris is Burning” is currently streaming on HBO Max and is available for rent from Apple TV+.

A favorite of the 2015 Sundance Film Festival for being shot on iPhones, “Tangerine” shows a day in the life of two transgender sex workers in Hollywood. Alexandra reveals to Sin-Dee Rella that her boyfriend cheated on her, and she sets out on a mission all over town to find the other woman and confront him. It’s a comedic drama that illustrates the different degrees of friendship, as Alexandra and Sin-Dee Rella find themselves at odds but must continue to rely on one another in an isolating industry.

“Tangerine” is currently streaming on Netflix and Amazon Prime Video.

This atmospheric romance concerns the intersection of two teenage boys growing up next door to each other in the unhappy, unforgiving projects of Southeast London.

Shy, sensitive Jamie (Glen Berry) and rugged, athletic Ste (Scott Neal) start with an uneasy friendship, not quite sure if they can trust each other. After an incident with his abusive father sends Ste next door to spend the night, the two find themselves with a sorely needed opportunity to take a step toward their true selves, their lives change forever.

With a soundtrack consisting almost completely of songs by The Mamas and the Papas, “Beautiful Thing” is a cute and simple movie that will take you right back to the exhilaration and exhaustion of first love. It’s a reminder that, when the long road ahead seems impossible, sometimes the best thing to do is stop and savor the moment, throw your arms around your paramour, and dance to something sweet and slow.

“Beautiful Thing” is currently available to rent on Amazon Prime. 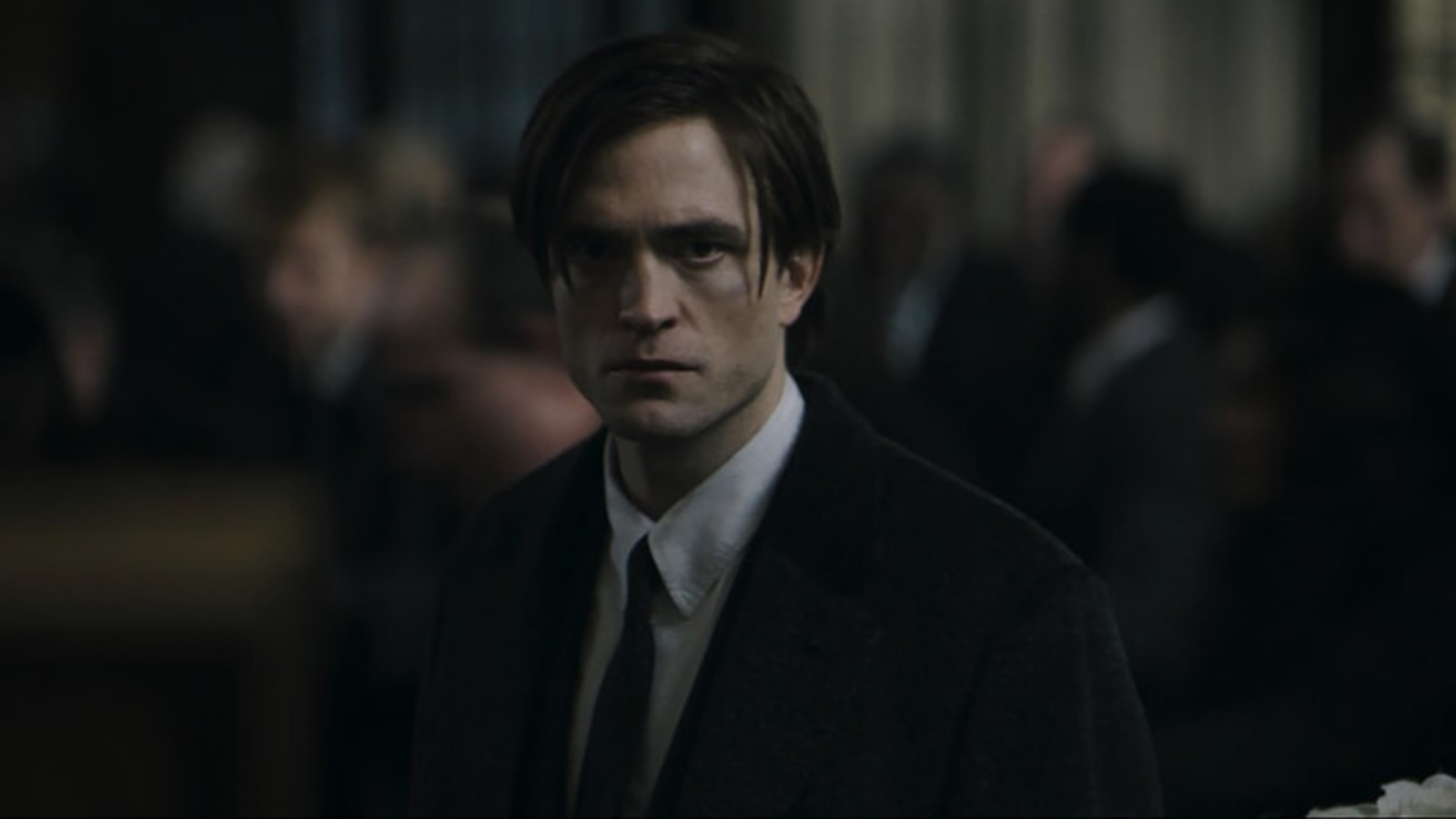 The many faces of Batman: What to watch this weekend

The life of trailblazing 1920s blues singer Ma Rainey (Viola Davis) was the inspiration for the 1982 August Wilson play this film is based on. When Rainey and her band gather in a Chicago studio in 1927 to record a new album, tensions arise between young hot-headed trumpeter Levee (Chadwick Boseman, in his final role), who dreams of leading his own band, and veterans Cutler (Colman Domingo) and Toledo (Glynn Turman).

The title is derived from the Rainey song "Black Bottom," which refers to a dance of the same name, which was created by African Americans in the rural South and made popular during the Jazz Age. That story of exploitation of Black recording artists governs the entire film.

This sleeper-hit, queer love story in musical form just had to be on our list, if for no other reason than its insanely decorated cast. Originally a Broadway musical, “The Prom” follows Emma, a teenage lesbian who just wants to live out and proud in her small Midwestern town. She wants to take her girlfriend (played by newly minted Oscar winner Ariana DeBose) to prom. In response, rather than just letting Emma live her life, the PTA decides to ruin prom by canceling it for everyone.

Enter Nicole Kidman, Meryl Streep, James Corden and Andrew Rannells, playing four Broadway caricatures ready to turn that Indiana town upside down — and win Emma’s prom back in the process! There are a combined 27 Academy Award nominations and wins between Kidman and Streep alone, and we’re not even dipping into the many Tony Awards racked up by the entire cast. That’s acting, people.

“The Prom” is currently streaming on Netflix.

This poetic coming-of-age drama follows Chiron, a young Black man, throughout three chapters of his life. Growing up in a rough Miami neighborhood, surrounded by drugs and crime, he struggles to find his place in life and comprehend his own personal identity. Chiron dismisses his sexual identity until adulthood, when he rekindles a connection with a childhood friend. This 2016 film won an Academy Award for Best Picture.

“Moonlight” is currently streaming on Hulu and Amazon Prime Video. 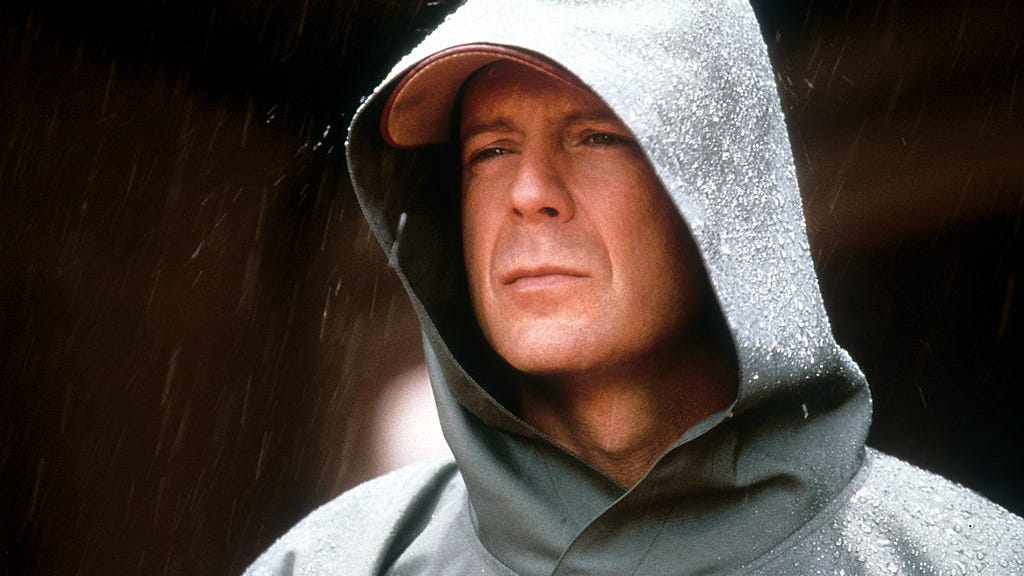 Where to watch the best — and most Philly — Bruce Willis movies

If you're single or feeling miserable — or both — the tortured 20-year love affair between rodeo cowboy Jack Twist (Jake Gyllenhaal) and ranch hand Ennis Del Mar (Heath Ledger) should be heart-wrenching enough to make any viewer’s personal relationships seem like the beaux idéals of romance.

In 1963, the two men are hired to tend sheep on a grazing range. Passion and secrecy bond them unexpectedly, but the end of summer cuts them off. As their separate lives play out, the pair continue to reunite periodically — until it’s no longer a secret.

Don’t come looking here for a happy ending here, but the truth comes out in the end, and the truth always has a way of setting us free.

“Brokeback Mountain” is currently streaming on Peacock and available to rent on Amazon Prime.

Olivia Wilde’s “Booksmart” takes coming-of-age comedies to the next level. High school besties Amy (Kaitlyn Dever) and Molly (Beanie Feldstein) shine academically but lack in social skills. The night before graduation, they decide to make up for lost time by partying like never before and getting attention from their crushes. It’s a lighthearted and fun story, and Dever’s character, who is a lesbian, brings representation of LGBTQ youth to the forefront. Amy has been openly queer for a couple of years but has never kissed a girl — to Molly’s disappointment. It just goes to show that where someone lands on the queer spectrum is unique to everybody.

“Booksmart” is currently streaming on Hulu and available to rent on Amazon Prime.

Sometimes period dramas take editorial liberties. “The Favourite” leans into that fully. This comedic drama follows Queen Anne (Olivia Colman) in 18th-century England, which is at war with France. Lady Sarah (Rachel Weisz) is a court favorite of the queen, serving as her confidant and adviser — and secret lover. Sarah keeps Anne abreast of her political leanings, essentially influencing the queen’s rule. Then comes Abigail (Emma Stone), a maid who slinks herself all the way up into the queen’s court. Sarah and Abigail form a rivalry as each vies for Anne’s affection and political power.

If you like “The Favourite,” you’ll love “The Great” on Hulu, both co-written by Tony McNamara. This comedy series “The Great,” starring Elle Fanning, Nicholas Hoult and Phoebe Fox, takes historical dramas in the same vein with apocryphal tales of Catherine the Great’s rise.

Harvey Milk was one of America's first openly gay elected officials — a distinction that came at the ultimate price.

"Milk," the 2008 film starring Sean Penn, is about a former U.S. Navy lieutenant, teacher, stock analyst and anti-Vietnam demonstrator who got involved in San Francisco politics and made history for LGBTQ rights when he was elected to the city's Board of Supervisors in 1977.

Milk faced many hurdles in his mission to open doors for lesbians and gays in the late 1970s, navigating death threats and personal drama. Most dangerous among them was Dan White (Josh Brolin), a colleague and rival on the San Francisco Board of Supervisors.

"All men are created equal. No matter how hard you try, you can never erase those words," Milk said in a key speech portrayed in the movie.

White tried and failed to silence his rival by assassinating Milk, as well as Mayor George Moscone, in 1978. As Milk, who was 48 when he was killed, said in an audio recording, "If a bullet should enter my brain, let that bullet destroy every closet door."

This is that story of hope in the face of tragedy and adversity.

Hedwig and the Angry Inch

John Cameron Mitchell, who is a cisgender a white, gay man, wrote the book and musical this film is based on, and he directed the film, and he starred as Hedwig in both. That’s probably why — from its capricious transgender stereotypes to the running joke about surgery, built into the story via the title — the film’s premise feels outdated.

But this movie makes the list because there’s no better way to explore the origin of love than with a David Bowie-esque rock musical. The story takes us back to the last years of the Cold War, in East Germany, where Hansel (Mitchell) falls in love with an American soldier.

He convinces Hansel to undergo gender realignment surgery so they can get married and flee Communist East Germany. The procedure is botched, fulfilling the promise of the title, and Hansel’s man drops them like a lead brick. But Hansel is in the States now — and the show must go on. They take their mother’s name and, now “Hedwig,” they straddle a line between East and West, past and the future, as they embark on a greasy-spoon tour of America in search of identity through gender, stardom and rock ‘n’ roll.

“Hedwig and the Angry Inch” is currently streaming on Amazon Prime.

This Lily Tomlin-narrated documentary demonstrates how the entertainment industry has shaped perceptions of queer figures, showing the evolution of historical contexts that gay, lesbian, bisexual and transgender stories have occupied in movies.

"The Celluloid Closet" is currently streaming on Amazon.

A Black lesbian filmmaker and Temple University alum Cheryl Dunye researches an obscure Black actress from the 1940s billed as "the Watermelon Woman."

"The Watermelon Woman" is currently streaming on Hulu and Amazon Prime.

I Am Not Your Negro

"I Am Not Your Negro" is currently streaming on Netflix, Hulu and Amazon Prime.

The Death and Life of Martha P. Johnson

"The Death and Life of Martha P. Johnson" is currently streaming on Netflix.

"Brother Outsider: The Life of Bayard Rustin" is currently streaming on Kanopy — for free with a library card — and Vimeo.

"Bent" is currently streaming on Tubi, Crackle and Plex.

"The Color Purple" is currently streaming on Amazon Prime.

"Bessie" is currently streaming on Hulu.

"Pariah" is currently streaming on Hulu.

And the Band Played On

"And the Band Played On" is currently streaming on Hulu.

Call Me By Your Name

"Call Me By Your Name" is currently streaming on Amazon Prime.

"Truth or Dare" is currently streaming on Amazon Prime.